For many years, a loose affiliation of aquarists have been active on a particular Internet message board advocating for larger aquariums for surgeonfish. Dubbed the “Tang Police” due to their strong arm tactics, they gang up on the uninitiated and anyone else who dares challenge their assertions. The problem is that they have set unrealistic minimum sizes for aquariums they feel should house tangs based primarily on their personal opinions, and not on any real world data. Additionally, it is confusing to many why these people advocate so vociferously for tangs, but ignore other species of fish that require substantial swimming space, notably parrotfish and wrasses.

People rarely admit they are a member of the “Tang Police”, but comments such as, “I just care about tangs, so if that makes me a member, then so be it.” are commonly heard. Additionally, people can become “temporary charter members” when they join a pile-on where everyone is being highly critical of some poor person who became “arrested” by a member.

Not everyone approves of their tactics or their message. In one classic case, a person actually took the time to identify some members of the tang police, and then went to their online photo areas and discovered pictures of some of their tanks showing tangs in what the police would tell others are undersized aquariums! 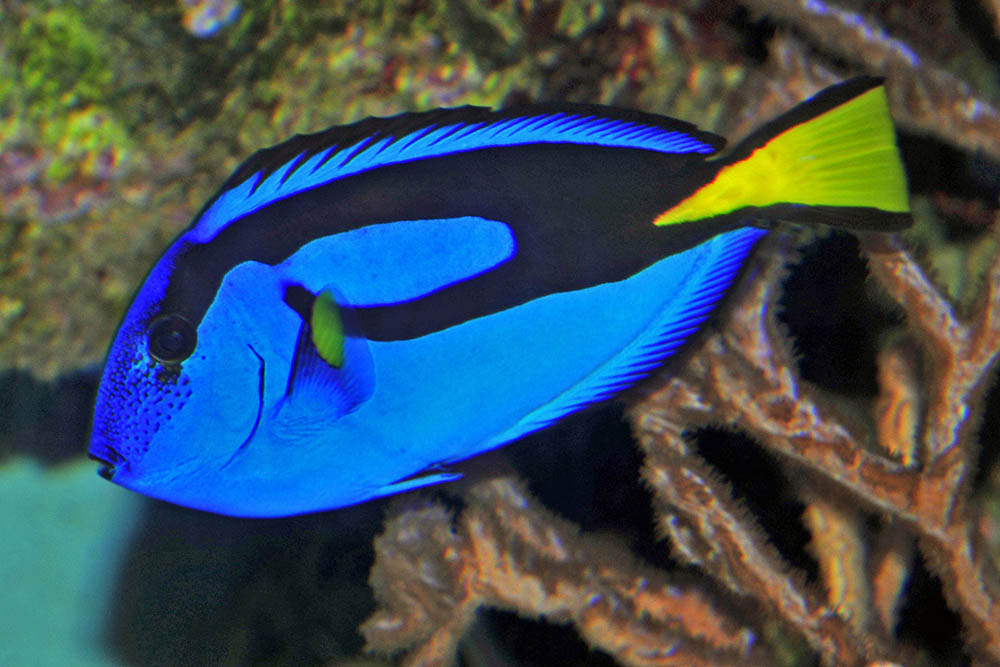 Paracanthurus hepatus – Poster child for many of the Tang Police, is actually a less active swimmer than many tangs, and it is generally very easy to find a new home for one if it grows too large for an aquarium.

Other forums have similar entrenched groups. There is actually a “striped octopus police” that vehemently opposes the ownership of the mimic octopus or the “wunderpus” by private aquarists, yet many of them have kept these species themselves – a case of do as we say, not as we do. I myself am a member of the “Quarantine Police”, telling (nagging?) people who post a message that they have Cryptocaryon in their display tank that they need to have a comprehensive quarantine protocol on place. Knowing how this sort of “police action” can affect people, I do try not to be too preachy. There are even a couple of people who operate as linguistics police – every time somebody posts a message about “schools of fish in an aquarium” they swoop in and correct them, saying that captive fish don’t form schools, they form SHOALS.

Driving in to work one morning, with a half a pot of strong coffee boiling through my veins, I got to pondering – when you hear somebody say, “you need to do X,Y,Z in order to keep your fish happy” or “your fish cannot be happy in that size tank” what do they really mean? Are they using the word “happy” in place of “healthy” or “proper well-being”? Or do they really mean to imply that true happiness can be identified and then quantified in fish?

I may use that term myself – “Man, that fish sure is unhappy.” to identify a fish being bullied by a tankmate. What I really mean is “That fish has an ongoing territorial conflict with a tankmate, it is exhibiting a depressed demeanor and its well-being is compromised. If something isn’t done to change the situation, that fish’s health will be affected, eventually to the point of morbidity followed by mortality”. It is just faster (but far less precise) to use the word “unhappy”.

On the other hand, an animal rights advocate may look at a single fish in a tank and exclaim, “how unhappy that fish must be, all alone in that small tank”. I suspect that in these cases, they mean not the fish’s well-being and health, but that it is truly unhappy in the mammal paradigm of how the word is generally used in English.

Now don’t get me wrong, I don’t have a problem that some people do with semantics – as long as their intent is clear. Same thing could be the case with “happiness”, I’m content to let the term ride unless I think the people really mean “smiley face” happy, as in “the opposite of sad” when talking about fish.

However, if for example, one of the “tang police” say, “hepatus tangs need at least a 150 gallon tank in order to be happy” they are not using the word in place of “healthy” if that same tang can be kept healthy and problem free, long term, in a 75 gallon tank. They are then adding an extra layer to the definition, one that cannot be measured or quantified. I do have a problem with that, it is misleading or ambiguous at best.

I’m not condoning keeping fish in overly small aquariums, I’m just opining that you cannot formulate tank size requirements based on intangibles such as the “happiness” of a fish. If your opinion is that this example fish is so much happier in the 150 gallon than the 75 gallon, that the smaller tank becomes a non-starter, then the fish would be whole orders of magnitude “happier” in the wild, and shouldn’t be kept in an aquarium at all.

Since 1985, I have been collecting fish respiration rate data as a means to try and identify stress in captive fishes. Certainly, I discovered that stressed fish respire at a higher rate (with temperature, species, and size all being factored in). I then collected baseline data from wild fishes in the Bahamas and the Galapagos. My hypothesis was that fish from the wild would respire at the best, most stress-free rate. Funny thing – almost all of those fishes respired faster than captive fish. It turns out that swimming against currents and waves, sculling around looking for food and out-swimming predators were all combining to cause these fish to be MORE physically stressed than captive fish by this measure. Are they less happy then?

So here is my working definition of “appropriate aquarium husbandry”, and I say this equates to “happy” for a captive fish:

If the fish shows no signs of chronic disease or abnormality, exhibits normal feeding and reproductive behaviors and most importantly, exhibits a normal lifespan compared to that of wild counterparts (minus the predation that wild fish incur of course!), then there is no other metric we can use to determine if a certain suite of husbandry techniques are suitable or not.