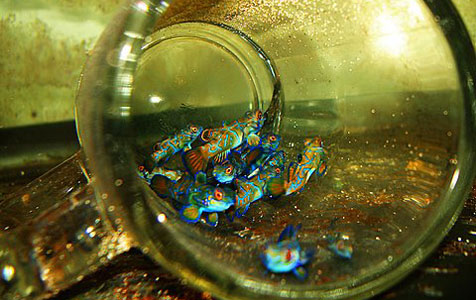 Nine-month-old Green Mandarins bred by the author in their sunken beer-mug feeder.

Last year, as my interest in mandarins was being rejuvenated, I searched the internet for recent happenings in the world of the Genus Synchiropus. Beyond the obvious reports of reproduction and rearing, I was interested to know if things were changing in the way aquarists approached feeding their psychedelic but difficult-to-nourish pets.

One of the best articles I came across was by Marc Levenson’s on melevsreef.com entitled Melev’s Mandarin Diner. At the time, I thought the article and video were quite amazing, but stored the information in the back of my brain thinking it had little application for what I was trying to do. Marc maintains a large reef aquarium and target feeds his mandarins by lowering a jar filled with pellets to the floor of the aquarium. The mandarins have come to recognize the jar with food and are allowed to feed unchallenged by the larger fish in the reef.

Well, nearly a year later I have found a use for this ingenious contraption.

I now had hundreds of juvenile mandarins eating prepared foods. At first, I simply dumped the food in the growout tank and watched as it swirled and floated with the current. I wondered, “Is it ever going to sink?”. As tiny morsels hit the deck they were quickly scarfed up, but maintaining water quality was becoming a challenge.

If I lowered the water flow, nitrogenous waste build up became obvious, but when I increased the flow to flush uneaten food out of the system, the mandarins weren’t getting enough to eat. Aha! The light bulb lit and I recalled Marc’s trick.

I filled tiny glass beakers with food and lowered them into the tank, making sure to spill a little at the entrance. Before long, the little mandarins began to congregate at the entrance of the beaker. Another few weeks went by and the little guys would pile up inside the beakers waiting for the dinner bell to ring. I soon realized I was going to need a bigger beaker.

I met Marc at this year’s MACNA Conference in Atlanta and expressed my thanks for his article. I swore I would try to get a picture of the little mandarins in their diner and although it has taken some time I finally got one. Last night as I was busily trying to get some work done on the computer I looked over to the mandarin tank and realized I forgot to feed them. Some of them were anxiously waiting inside their beer mug diner. No more mess, no water quality issues and best of all, Beer Mug Target-fed Mandarins.