There are four very important resources for aquarists interested in public aquariums. The first is the venerable public aquarium journal, Drum and Croaker. The following is a description of D&C from the web site: 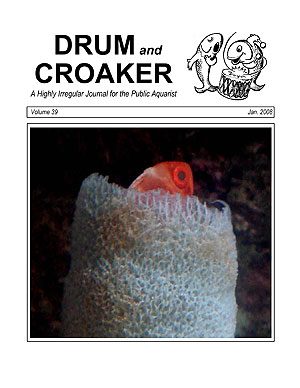 Drum and Croaker is a non-peer-reviewed journal that has acted as an “informal organ” for public aquarium professionals since 1958. It has a long history of providing a forum for the exchange of basic information – and occasionally humor. It was conceived in the back seat of a car in 1957, and has remained erratic and irregular throughout most of it’s life, characteristics it shares with a colleague or two. The original name, “Grunt and Crappie” was rejected for scatological reasons…but it was perhaps no surprise that the the first call for papers then heralded the periodical as “an irresponsible journal…by undedicated aquarists”.

While this material is not peer-reviewed, there is a LOT of peer-pressure placed on the authors so the material is usually very accurate. The journal issues are not really indexed by search engines, so to find articles, it is usually best to go to the web page where the issues are archived:

Not every paper will be of interest to home aquarists, but there is plenty of interest for intermediate and advanced aquarists – and the material is often unique to this journal and not found elsewhere.

The second resource is the Association of Zoos and Aquariums web site, in particular the job postings page. If you want to work for a public aquarium, you should start here:

Once you have a job with a public aquarium, you might consider attending the “Regional Aquatics Workshop” held annually at a different aquarium each year. The first RAW meeting was held in Toledo, Ohio in 1989 and was attended by 20 aquarists. The most recent meeting was at the Atlantis Marine World on Long Island and had perhaps ten times that many attendees. Typically, the only non-public aquarium folks who attend are aquarium vendors. The link for the 2009 conference is here:

The last resource is perhaps the best, but the hardest to access. There is a public aquarium listserve that hooks up public aquarists from around the world. Because the membership is so large (perhaps over 600 active members) new members need to be vetted by somebody who already has access to the listserve. If you work for a public aquarium, just ask your boss or supervisor to learn how to subscribe to “Aquaticinfo”.