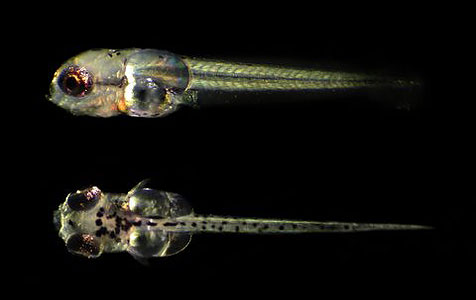 I know, I know, gouramis are freshwater fish, but I couldn’t resist snapping a photo to illustrate the beauty of design in form and function.

Anabantoids hold a special place in my book of fishes as they were one of the first aquarium groups to test my breeding skills long ago in a re-modeled closet fish room in my parents’ home. (Anabantoids are the so-called labyrinth fishes that breathe air and include bettas, gouramis, paradise fish, and others.)

A few days ago when Dr. Jon Shenker’s aquaculture class at Florida Institute of Technology got a successful hatch of Gold Gouramis (Trichgaster trichopterus), curiosity got the better of me, and I grabbed a few for the microscope.

It is not hard to observe the many wonders of evolution that have helped shaped the form of adult fishes. Examples of intricate detail in construction are everywhere. Diverse body forms, fin structure, mouth parts and other characters allow nearly 30,000 different species of fish to thrive in aquatic environments.

These are only a handful of examples that are easily observed in adult fishes. Casual observations that reveal diversity are easy to find in adult fishes; they are large enough to see without a magnifying glass, we can dive on a coral reef and observe them and we can keep them in aquariums to watch them.

Larval fish are different. Though they are magnificent and diverse in their own right, they are very difficult to observe without a microscope or some severe eye squinting. You typically don’t hear conversations among aquarists about how pretty a larval fish is or: “Hey, did you see the dorsal finfold on that snapper!”

That is why I love them. It is like a hidden world of detailed beauty. Every time I stare into a microscope I find something new and powerful that inspires a million questions. This is what happened with the gouramis.

The life history of common anabantoids is an amazing example of evolution. The labyrinth organ, unique to the group, allows gouramis and bettas to thrive in hypoxic (low oxygen) conditions that would be intolerable to most fishes. The labyrinth organ has been so successful in this group that the gills alone are insufficient to supply sufficient oxygen uptake. Gulping atmospheric air in mud puddles and rice paddies, devoid of appreciable levels of oxygen, is an incredible adaptation to living in stagnant waters.

But, how in the world does a fish reproduce under these conditions? How are the larvae able to survive when they do not possess a labyrinth organ and their gills filaments haven’t developed yet? Building a nest of mucus covered bubbles and sticking the eggs close to the surface is just the first step. By keeping the eggs near the surface, suspended in a raft of bubbles, the fish are able to tend the eggs in or near the surface film where the most oxygen would be.

But, what about the larvae? I had never seen a gourami under the microscope before. Though I have raised them on numerous occasions I never looked close enough to see what was “aiding” the larvae to survive under such harsh conditions. When viewed from above it looks like the larvae have “water wings,” you know, those fluorescent orange inflatable arm bands that keeps kids at the top at the pool.

Two large dorsal sacs are present on each side of the body that keep them floating at the surface film. (At first I thought they were filled with air, but a bit of research suggests they contain oil remaining from the yolk sac.) Here, under the surface film, cutaneous gas exchange occurs to supply vital oxygen to a tiny fish without gills and without a labyrinth organ. Pretty darn cool.

I am sure this is a known phenomenon in the anabantoid world and should be a well-recognized adaptation in the larval world, but for me, this is something new and helps illustrate our curious world.