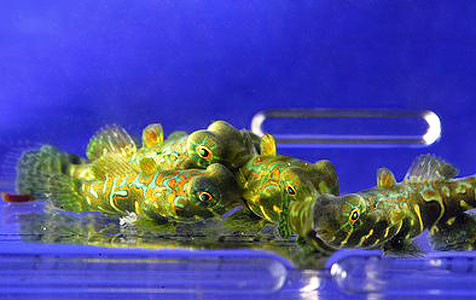 It has been a little over three months since I stocked my first spawn of Spotted Mandarin (Synchiropus picturatus) eggs into a barren rearing tank.

Forty days after hatching they looked like mandarins, but were still far from revealing the adult colors so appealing of the species. I brought a handful of the juveniles to show off at MACNA (the Marine Aquarium Conference of North America in Atlanta) since they were starting to reveal some intricate patterns and bold colors, but they were a bit too small for most observers to find and appreciate.

When I got back to my lab, I grabbed a small net full of the mint-green juveniles and snapped a few photos. Instead of putting them back into the rearing tank, however, I decided to take them home to a nano tank and see if I could coax them into eating prepared foods. The nano tank is home to a few juvenile green mandarins fully trained to accept a ‘mush’ of prepared foods.

Within minutes, the little spotteds became active explorers and began pecking at the substrate. Over the next few days the juveniles began accepting prepared foods with vigor. My growing tank of captive-bred mandarins remains peaceful, easily fed, and becomes more colorful each day. It’s quite amazing, considering that just a few months ago I was firmly convinced that mandarinfishes were poor candidates for the aquarium life, let alone captive breeding.