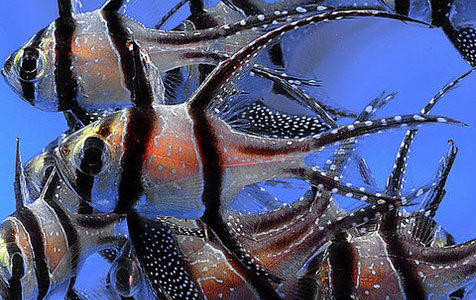 This year’s Marine Aquarium Conference of North America (MACNA) heard a rather alarming call for action and a warning question issued to everyone involved in the marine aquarium hobby. At what price do we sacrifice conservation?

Working with MASNA, Eric Borneman introduced a grass roots effort to conserve the Banggai Cardinalfish, which he believes could face extinction in the wild within the next 10 years. In essence, Eric called for concerned aquarists and livestock sellers to boycott wild-caught Banggais and to support the trade in captive-bred Pterapogon kauderni.

The gist of the message is simple. In the absence of government protection (from our own as well the Indonesian country of origin), the threat to wild Banggai populations is real. Unlike most reef fishes, the Banggai Cardinal has a limited range in the wild, with just several dozen local populations enar small Indonesian islands.

Two local populations have already been wiped out, and if current collection trends continue we could quite possibly witness the extinction of more wild Banggai populations within a short time.

As I pondered the thought of extinction I questioned the responsibility of the trade. Can the aquarium trade afford to be responsible for causing the extinction of a marine fish species? The answer is and emphatic “No.”

For decades non-government agencies, industry leaders, and aquarists have struggled to combat attacks (for example, ‘raiders of the reef’ in Audubon Magazine), to work against blanket collection bans, and illustrate that the hobby is sustainable and beneficial to conservation and education.

This is where it gets confusing. The mortality rate of wild Banggais is horrible. It is not uncommon to lose entire shipments of wild fish, and the ones that survive long enough to sell seem to last only weeks. The reason is still a bit unclear, but crowding, stress and holding conditions are the primary concerns. Banggai Cardinals are imported in huge batches, and their immune systems are likely overrun by disease, possibly a newly identified virus.

So, wild fish are dying, which gives the fish a bad name in the eyes of hobbyists and wild populations are suffering. Hmmm. The confusing part comes when we look to the people breeding Banggais. They can’t compete with wild imports, as the market price is in the $3 US range. Banggai breeders are typically overstocked with healthy, hardy fish that can’t compete in a market looking for the lowest possible price.

Wild Banggais make a lot of people money along the supply chain, and their importation is not likely to cease until consumer demand for these fish drops. No one wants a sick fish and those that are sold (knowingly or unknowingly) breed aggravation among hobbyists. Dying fish are a major reason newcomers drop from the hobby.

When Banggais were first collected for the trade they fetched a king’s ransom that was gladly paid. As the price dropped, so it seems did the quality. As in most aspects of the trade we have choices. We can choose healthy, captive-bred Banggais or wild Banggais that are likely to perish and contribute to the demise of wild populations as well as permanent damage to the image of the aquarium hobby.

Banggai breeders are becoming more prevalent throughout the country and there is no reason retail outlets should need or request wild imports. In my view, it is extremely important for hobbyists and local store owners to support local growers. A few extra bucks is a small price to pay to keep the breeders in the game and the Banggai Cardinal off the extinction list.

This is important. If a local breeder produces Banggais to battle extinction but can’t sell his or her stock because retailers want cheap fish, what is the answer?

Do we breed only the species that fetch a high sum in the marketplace at the risk of the species conservation status? Do we target rare fish to increase our profit margin? And do we avoid species like Banggais and mandarins because we can’t make enough money doing it?

These are certainly tough questions and the answers ultimately lie in the hands of the many that try. If we target rare fish we may make some money, but we may also increase the demand in the trade and possibly put more pressure on wild populations.

For years, the Splendid Dottyback was elusive and rare and everyone that observed the rare underwater photographs drooled over the possibility of obtaining one. Before long, they were available through commercial aquaculture sources. This spiked the specie’s attraction, and wild imports increased exponentially. Collectors, wholesalers, importers—there is always someone waiting to take advantage of a popularity boost.

Whether we like it or not we have responsibilities. As hobbyists we have the responsibility to ensure a sustainable future for wild populations of the fish we keep as well as the hobby itself.

We need to identify species of concern and buy captive bred. As breeders we have the responsibility of propagating and learning as much as we can to preserve species of concern and offer sustainable alternatives. Personally, I love to raise a rare and elusive fish, but in the eyes of conservation suggest we concentrate our efforts on those that need it most instead of putting more pressure on wild stocks.

In the absence of a governing body, the multiple segments of the aquarium trade (exporters, importers, retailers, and consumers) are responsible for its future. Before the government becomes the body of involvement, let us join forces and demonstrate our passion.

Banggai Breeding I by Frank Marini.