When do Spotted Mandarins Get Their Spots? 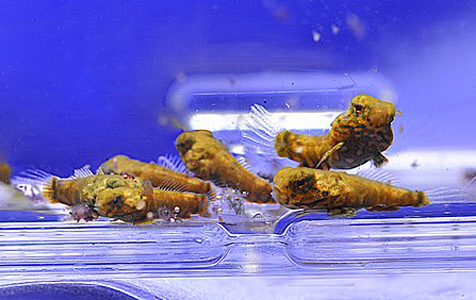 A group of juvenile spotted mandarins near 40 days after hatching. The juveniles are quite active in their search for food and wrestle amongst each other to secure ‘feeding zones’ on the bottom.

Over the past several months I have learned a great deal about the behaviors and breeding of mandarinfishes (Synchiropus spp.), also known as dragonets. Mostly, I have learned that I want to know more.

Each new day brings a new challenge, a new question and more insight into the secret world of these fascinating fishes.

My first spawn of Spotted Mandarins (Synchiropus picturatus) are now around 40 days old and growing quite nicely. From afar they seem similar to the Green Mandarins at the same age. They are mostly a mottled tan color with an intricate pattern of dark browns and blacks. When the light hits their eyes just right they glow fluorescent green, giving the somber background color a bit more flair.

The head of juvenile Spotted Mandarins are more pointed and streamlined than the round and blunt heads of greens and when you look closely they just look mad. In fact, when you stare at the bottom of the tank long enough, juvenile spotteds are a handful and can be very rowdy fishes. They are constantly chasing each other around and perform combat circles quite frequently. No harm ever comes from these squabbles, but it goes to show that these little ones certainly take their feeding territory seriously.

When I first stocked the eggs into the rearing tank I counted the eggs volumetrically and estimated I started with roughly 80 eggs. Once again, similar to the Green Mandarins, I ended up with a surplus. A few days ago I counted 128 Spotted Mandarin juveniles hopping on the bottom of the rearing tank. I am very excited about this batch of captive mandarins and am crossing my fingers that they turn mint green with bright orange bullseyes soon. I haven’t attempted to wean this batch to prepared foods yet as I am hoping they will color up faster with copepods and enriched Artemia. My goal of creating an intricate collage of captive-breds of both species is ever closer.