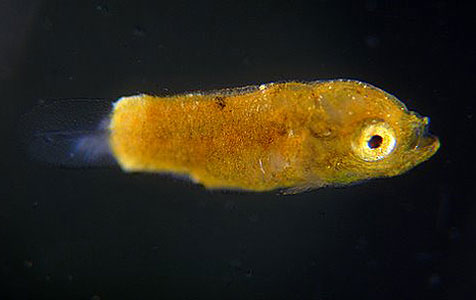 Today, for about the 400th time this week, I re-read Wolfgang Mai’s article in Coral Magazine entitled Mission Accomplished: Spawning the Spotted Mandarin.

No matter how many species of fish we raise, there is always a sense of wonder and excitement when working with something new. For me, each new day is terribly exciting as I creep close to the larval tanks and hold my breath, hoping to find a tank full of healthy and active larvae instead of a scene of disappointment.

When successful reports exist, such as Mai’s, I tend to read the report over and over for reinforcement. When experimenting with breeding marine fishes, the anticipation and excitement grows while waiting to see the tiny larvae grow into something that resembles the adult form.

The first feeding larvae of the Spotted Mandarin slightly resemble those of the Green Mandarin, being bright yellow and tiny. Five days after hatching the Spotted Mandarins took a bit of turn from what I considered typical Green Mandarin development. Instead of turning bright orange they turned to the color of rust, or maybe dirty orange, with white spots on the dorsal and ventral finfold. An interesting aspect of development in both species is the total lack of pigmentation on the posterior finfold.

In the pictures, it looks as though someone has drawn a straight vertical line down the middle of the fish, but in fact a clear notochord and tail are present behind this line. Mandarin larvae are unlike most other reef fish larvae in that they aren’t too active in their search for prey. Often, after watching a group for hours I am amazed they can catch anything to eat.

At 5 days old the larvae became a bit more active in their hunt for prey and curled up in the classic “S-strike pattern” and pounced forward onto rotifers and copepod nauplii. A few days later the larvae thickened and still, appeared dirty orange or mottled yellow, never taking the bright orange color of the greens at the same age.

Eight days after hatching the larvae appeared almost awkward while swimming in the water column. Their body mass seemed to affect their swimming and they would curl their bodies wildly using them almost like sails to maneuver through the water. I pulled a single larva from the tank to snap this photo. Pelvic fins were present, which means settlement isn’t that far away. Pectoral fins were present, but without fin rays. The notochord was still straight and the solid line separating the color from the clear seemed to stretch back a bit.

The larva seemed chunky so I imagine they are getting plenty of food. More to come…