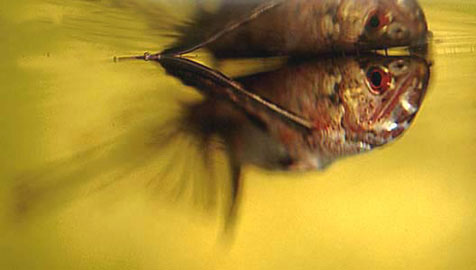 One of the most interesting freshwater fish I’ve ever kept is Pantodon bucholzi, the African Butterflyfish. It is found in tropical western Africa, inhabiting shallow, still pools in flooded areas or at the edges of streams. Although growing to a little over four inches in length, it gets along well with many other fish, even smaller ones. It is also hardy and easy to feed. A long, shallow tank, such as a 30 or 40 gallon size, suits it perfectly. To allow head room for a terrestrial plant display, I settled on a 45 “long” style, with a 12 X 36 inch base and 24 inches of height.

With this species in mind, I wanted to create an aquarium design that would feature not only one of my favorite fish, but also display some interesting orchids, another passion shared by many aquarists.

If you have ever given thought to combining terrestrial and freshwater habitats in the same microcosm, you know that the selection of terrestrial plants requires careful consideration. You want something that remains relatively small, adapts to the warm, humid conditions that will prevail, and hopefully blooms now and then. Few plant families can fulfill these criteria with such exuberance as the orchid family can. With more species than any other plant group, not to mention tens of thousands of horticulturally-derived cultivars and hybrids, the right orchid for your design awaits your discovery. 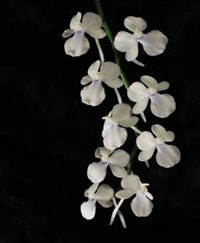 Plenty of plants will grow well alongside orchids. Many of these, as you might guess, also thrive under glass. Spikemoss, Selaginellaspecies, makes a good ground cover, for example. Bromeliads, club mosses, and ferns can all share the limelight. These and the orchids all grow slowly enough to permit their confinement without constant pruning, an important consideration in the limited growing space afforded by a tank. Furthermore, under proper conditions, pests and disease seldom pose a threat.

Water conditions for this tank are not critical. Near neutral pH and not too hard, at a temperature of 75–78°F, will suit P. bucholzi just fine.

The remarkable butterfly fish feeds at the surface, taking into its capacious mouth all sorts of insects and worms that live in or fall into the water.  So zealously will Pantodon pursue its prey that it may leap right out of the tank trying to catch a moth attracted to the light. Therefore, take sure the tank is well covered. It is not at all aggressive, except toward other surface-feeding fish, which it will consume if it can manage the deed. However, it generally ignores anything swimming below.

Aquatic plants for this tank might include: Anubias barteri v. nana,Bacopa monnieri, Cryptocoryne wendtii, C. willisi and/or Vallisneria spiralis v. spiralis. Because the water depth will only be about 12 inches, the plants must remain small or be easily pruned to remain within bounds. Avoid floating plants, which will prevent the butterfly fish from feeding at the surface. It will, by the way, take any sort of aquarium fare that floats; insects are not required for its survival. Otherwise, arrange plants and driftwood attractively, taking care to hide equipment. Remember that the tank must be only about half full to allow room above the water.

To provide for the orchids or other terrestrial plants, choose a piece of driftwood that can be placed so it stretches from an upper rear corner diagonally toward the front of the tank. The idea is to simulate a limb that has fallen from a shoreline tree into the water. Once you have the piece of wood placed to your satisfaction (this may requires some trimming), you can mount epiphytic plants on the portion above the water line. For this African-themed tank, you might select Aerangis citrata, a dwarf African orchid species (image above) that produces white, lemon-scented flowers in wintertime. Orchid growers use a pad of horticultural sphagnum moss on the piece of wood to support the roots, and hold everything in place with nylon fishing line. This method has always worked well for me. Once the orchid attaches itself to the wood, in about a year’s time, you can remove the nylon ties.

The variations on this basic idea are endless. Suitable combinations of fish, aquatic plants, and terrestrial plants can be found to represent habitats from every corner of the globe. By incorporating elements such as epiphytic orchids into your displays, you can gain a better understanding of the complex web of life sustained in the tropical forests surrounding the streams that harbor our favorite aquarium fish. This way of thinking about freshwater aquarium design has opened a new horizon for my aquarium keeping adventures, and I hope you discover some enjoyable innovations, too.