Green Aquariums – Why We Need Them 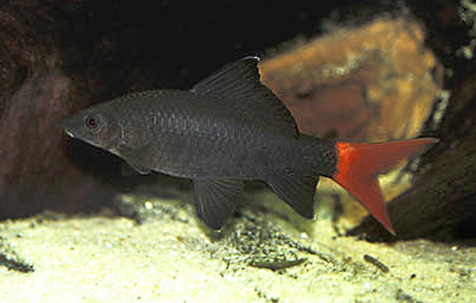 Redtailed Black Shark, extinct in the wild, but thriving in home aquariums.

Although I am no longer an aquarium retailer, I can imagine what most of my former colleagues are going through these days.

I won’t get into the debate as to whether we are now experiencing a recession or even something worse.  I’m no economist. By whatever name, however, in economic hard times one of the first segments to suffer is specialty retailing. Read that as Mom and Pop shops selling everything from model trains to scrapbooking supplies to dive gear and aquariums. The word I hear from friends in the aquatics industry is not encouraging.

Multiple factors surely lie at the root of the current industry slump, but one often cited is the lack of young people entering the ranks of hobbyists.  And one of the reasons given is the concern on the part of the younger generation for damage to natural ecosystems that sometimes results from the aquarium trade.

In my experiences with aquatic wildlife conservation close to home, the youngsters seem to be coming along with as much enthusiasm as I had at their age. I continually meet recent high school and college grads who are well on their way to becoming the marine and freshwater biologists of the next generation. Virtually all enjoy aquariums, and view them as a valuable tool.

As an advocate for a greener aquarium industry for decades, I will not deny that the industry/hobby have done damage. The list of specific problems is serious:

* Overfishing, for example the Yellow Tang in Hawaii;
* Destructive fishing methods, such as collecting with cyanide;
* Targeting of non-adaptable species like Seahorses;
* and more.

Both freshwater and saltwater players have contributed their share.  Nevertheless, the trend over the past two decades has definitely been toward a more sustainable industry.

In some cases, aquatic biodiversity has been preserved only because a particular species is popular with aquarists.  The freshwater cyprinid usually known as the Redtailed Black Shark, Epalzeorhynchos bicolor, is considered extinct in the wild, but thousands are shipped to the United States from Asian hatcheries every year.  Thus, this species survives only in aquariums.  Unfortunately, we have no way of knowing whether sufficient genetic diversity has been preserved to insure its long term survival. But at least it has not yet disappeared completely.

Captive propagation has also been responsible for eliminating wild harvest of many freshwater species, and will eventually reduce the demand for some wild marine species, as well.

Marine enthusiasts will be the first to agree they have a long way to go.  Wild caught fish remain profitable to industry players at all levels, and consumer demand remains strong for many species that will probably never be produced in captivity. That said, the impact of all aquarium wild harvest is minuscule in comparison with the damage wrought by deforestation, pollution, storms, dredging and other causes.

Nevertheless, we should choose specimens wisely and avoid species that have little or no chance of adapting to captivity.  The obligately coral-feeding butterflyfishes, such as the Ornate Butterflyfish, Chaetodon ornatissimus, provide a perfect example. Catching, shipping, selling (and, for the hobbyist, buying) a fish that is going to die within weeks is wrong, and almost everyone involved knows it.

That said, home aquariums can do an enormous amount of good by bringing ordinary folks up close and personal with some of farflung tropical ecosystem’s most beautiful denizens.  A broader awareness of the fragile beauty sheltered within coral reefs and rainforest streams can only increase the desire to protect them for future generations.

This has certainly happened within the ranks of other hobbies involving nature. Tropical orchids and butterflies are produced largely in greenhouses or via special “wildcrafting” projects.

In both cases, significant technical obstacles had to be overcome in order to succeed. Orchids, for example, do not produce stored food in their seeds, and must be germinated on laboratory media in flasks. Most terrestrial butterflies feed exclusively on one or a few closely related species of plants.  Like culturing algae to feed rotifers, you have to be able to grow the plant in order to culture the butterfly. Despite such challenges, the industries that support fanciers of orchids and butterflies are thriving.

I was at my local farmer’s market recently and was stunned to find butterflies offered. We now have a butterfly farm in my town! I could, if I wanted, arrange to have native butterfly species released as part of a family celebration.

Only a few decades ago, collectors sometimes chopped down huge rainforest trees just to get the orchids.  Analogous to the poisoning of coral reefs with cyanide, such atrocious practices came to an end primarily because the ability to produce orchids from seed caused the cost of plants to plummet to levels affordable by ordinary people. When the saltwater captive propagation industry matures sufficiently, such will also be the case for it.

Saltwater breeders should look to the freshwater realm for a business model.

At the moment, saltwater breeding is focused primarily on getting any species to the stage of development where it can be maintained on artificial foods. After that, growout becomes a matter of providing enough space to accommodate the thousands of offspring.  These are really two different operations.

You might be able to spawn 20 different species with only 20,000 gallons of water, but you will need five times as much water for growout space, maybe more. In the freshwater realm, most of the labor-intensive spawning and larval culture occurs in Asia, where labor costs are lower. Maturing larvae are then shipped to the United States, often to Florida, where growout takes place in vast ponds. Florida, of course, has an abundance of level, sandy savannahs ideal for pond construction, and plenty of water (at least until recently). Something similar should work for saltwater, as well.

So, does aquarium keeping harm the environment? In localized instances, no question about it.

Overall, however, I am inclined to think the influence of aquarists and aquarium keeping on the preservation of aquatic environments is positive and becoming ever more important.

We have, over the past decades, quietly made the aquarium trade greener and greener, before “Green” was trendy. Concerned aquarists must make an effort to communicate this message to our younger generations.