An urgent rationale for captive breeding of these popular fishes 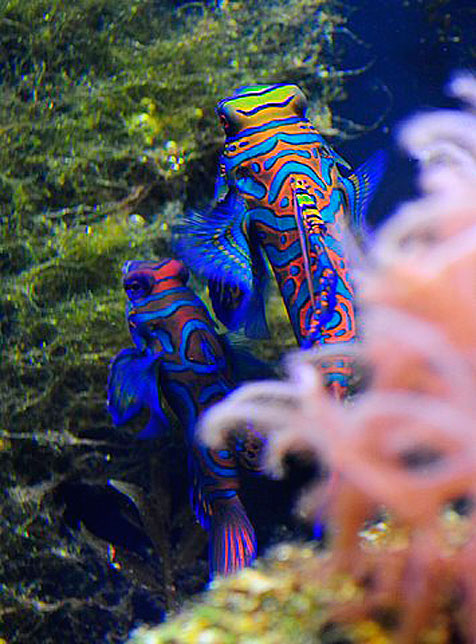 The fishery for mandarinfishes, especially the Green Mandarin and Spotted Mandarin is highly selective, targeting large males. For aquarists hoping to breed these fishes, finding a female can often be a challenge in itself. See: Breeding the Green Mandarin.

Yvonne Sadovy, a professor and scientist at the University of Hong Kong, has documented some of the effects of the selective wild fishery and its consequences on the life history of wild populations. I urge anyone interested in keeping a mandarin to read the links at the end of this article.

During my first trip to the Philippines I learned how mandarins were collected. Though I never actually saw them collected, local fisherman freely shared their techniques for capturing the various fish on the reef.

Fisherman had two opportunities to target mandarins. As a predominantly crepuscular species mandarins are highly cryptic in the wild and venture into view only during dawn on feeding forays and at dusk for spawning. Since they rarely strayed from the protection of thick coral or rock cover using common barrier net techniques was difficult.

Instead, fisherman construct a mini-spear gun to fire long, double pronged, sewing needles into the side of the fish. Common procedures tell fisherman to aim for the belly or the tail. Large male mandarins are obviously a larger target and more revered in the wholesale market.

This is a widespread technique for collecting mandarins and is not isolated to any particular region. When speared in the posterior portion of the body, and assuming the spears do not damage vertebrae, there are no long term consequences. Missing vertebrae and visceral punctures, however, create immediate or delayed risk of mortality.

According to the work of Sadovy, mandarins congregate nightly at designated spawning sites on the reef. Here, females select the largest males to mate with. As the large males are removed for the aquarium trade, females are forced to mate with smaller males. Her observations suggest that as females mate with smaller males spawning assents become awkward and prolonged which renders the pair more prone to predation.

It is also worth noting that mandarin populations have been driven to commercial extinction in some areas. Fisherman cannot find them to collect them. And where they were once plentiful are currently (2008) quite rare.

Marine Ornamental Trade in the Philippines and options for its poor stakeholders – http://www.streaminitiative.org/Library/pdf/regional/EcprepPhilippines.pdf [Update 6/4/2015 – it appears this report is no longer available online, and was not retained by Archive.org]