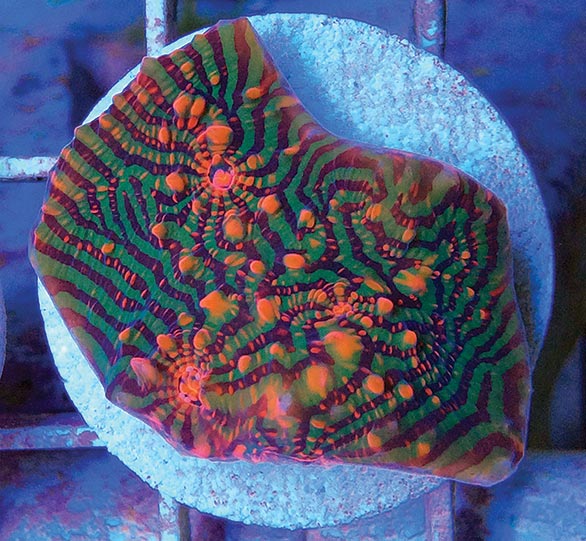 The currently unnamed Echinophyllia sp. Chalice Coral being propagated by A & M Aquatics.

The original parent colony of this gorgeous chalice coral, imported from Indonesia last year, was approximately 6 inches (15 cm) across. We immediately set it aside to let it settle in and see if it would retain its super-cool striated pattern under typical reef aquarium conditions. Frankly, it was tucked away and we forgot about it for a period of months. It thanked us by coloring up in spectacular fashion.

This chalice surprised us by not only growing exceptionally quickly and keeping the unusual color pattern, but, as the image shows, by adding an explosion of color around its many mouths. This image was taken under typical T5 lighting in a growout tank with no lighting tricks or super-blue LEDs. It has actually been cultured with relatively low levels of light and moderate to slow water flow compared to those in many of your tanks. We expect to start offering them for sale in limited numbers in the coming months, but this coral still lacks a distinctive trade name. CORAL Magazine readers are invited to post their suggestions.

The aquarist who supplies the name chosen will receive this frag, compliments of A & M. Shipping to continental (lower 48 states) U.S. addresses only.

The winner shall have his/her choice of prize, depending on prize availability based on residence restrictions.

1] Open to everyone except staff of CORAL Magazine, Reef to Rainforest Media, A & M Aquatics, and their families.

2] Live no-name chalice coral frag prize option available only to residents of the continental U.S (lower 48 states). A winner selected outside of the lower 48 states is only eligible to receive the 1-year CORAL Magazine subscription.

3] To enter, you must comment on this page with your proposed name for the no-name chalice coral cultivar.  Commenters must include a valid email address in the email field, required  for contacting the selected winner. In the event that the winner cannot be contacted, no prizes will be awarded to any other participant. CORAL / Reef2Rainforest is not responsible for entries not received / marked as spam on Reef2Rainforest.com; be sure your comment is in public view.

5] One winner will be selected from all entries by A & M Aquatics.

6] In the event that there are multiple identical / duplicate submissions, only the first person to have submitted the name will be eligible to receive the prize.

7] Shipment of the live coral prize to winner is handled by A & M Aquatics. Given the exclusive nature of this coral, no guarantees of live arrival or subsequent survival are made by CORAL, Reef To Rainforest, or A & M Aquatics.

8] In the event that the WYSIWYG prize becomes unavailable, a similar, comparable frag of the same chalice coral will be furnished by A & M Aquatics. If no other frag is available, prize of a 1 year CORAL subscription will be awarded.

9] Any and all applicable taxes are the sole responsibility of the winner.