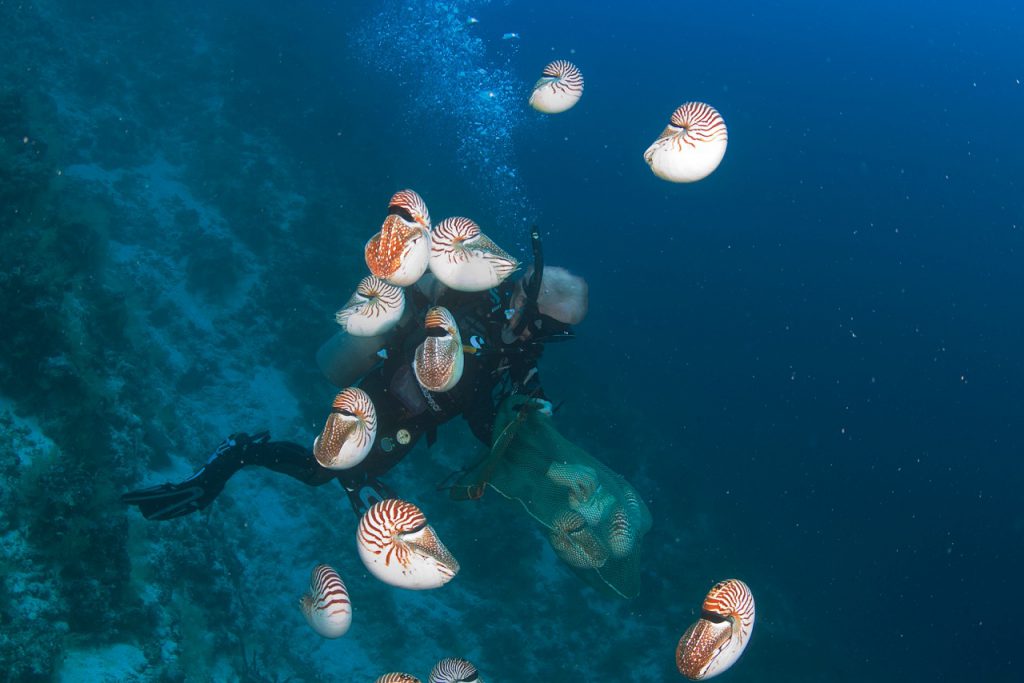 Dr. Bruce Carlson releasing Nautilus belauensis in Palau in 2015 during a research effort there to assess population changes since 1982. Image courtesy Marj Awai.

When the news came down that the Nautilidae (Allonautilus spp. and Nautilus spp.) will receive CITES Appendix II trade regulations and protections, we reached out to Dr. Bruce Carlson, a long-time Nautilus aquarist and researcher, for his opinions and insights on the conservation of nautilids. To give some perspective on his interest and background with nautilids, we asked Dr. Carlson to provide a brief biographical look at his history with the Nautilidae: 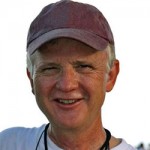 “An article about chambered nautilus in the January 1976 issue of National Geographic inspired me to attempt to collect these animals for display at the Waikiki Aquarium,” he wrote. “I accomplished this in August 1976, which was the first time these animals were displayed in a public aquarium in the United States (the Noumea Aquarium was the first in the world). In the years that followed, my team at the Waikiki Aquarium and I conducted research on nautilus in the field. We used transmitters for the first time to track their daily migrations, and eventually in 1985 we succeeded in obtaining the first nautilus embryos known to science. I’ve published numerous articles and scientific papers describing these research results.”

You can see more of Dr. Carlson’s work in a recent video we shared here on Reef2Rainforest.com, documenting the Palau Nautilus check in 2015 (shown in the image above).

Is CITES Regulation of Nautlidae a Good Idea?
By Bruce Carlson, Ph.D.

On the topic of CITES regulation for the Nautilidae:

“The effort to provide CITES protection for the family Nautilidae (all Nautilus species belong to two genera: Allonautilus and Nautilus) is warranted. Unambiguous data from the Philippines has clearly revealed that some populations have been fished nearly to extinction.

“The primary demand for Nautilus is, of course, for its shell rather than the aquarium trade, but either way, live animals have to be collected to meet demand. Unfortunately for Nautilus, it is easily captured with simple traps and bait, but due to its life history traits of slow growth, low fecundity and limited dispersal ability, it is difficult for populations to recover after intensive fishing.

“Nautilus species are distributed throughout the tropical west Pacific, and most populations are not exploited or threatened at this time, but the pattern of fishing in this region strongly suggests that more areas will be targeted in the future when present nautilus fisheries collapse. CITES designation is not a total ban on collecting and export, but it does offer a higher level of protection than currently exists.  For all these reasons, the scientific community has broadly supported this effort to have the family Nautilidae listed with CITES.”

Nautilidae – Best Left in the Ocean

We’d like to thank Dr. Carlson for his time and input on this important news story.

I’d also like to take this moment to reiterate that the keeping of Nautilus spp. in an aquarium is generally considered to be difficult, and is best left in the hands of expert aquarists, particularly the public aquarium sector (which may be better equipped to handle their care and space requirements).

Nautilus remain on TONMO’s list of Cephalopods to avoid as an aquarist as part of their Cephalopod Care Ethics statement. The requirement of large aquaria, chillers, dim lighting, and a generally inactive nature makes the Nautilus a pretty poor candidate for the home aquarium keeper. I can personally vouch for their generally boring behavior in an aquarium, having seen the Nautilus at our local public aquarium spend the vast majority of their time stuck to the aquarium walls, basically giving you a look at the backside of their shells and not much else.

I am always hesitant to lay down absolutes; if the keeping of a nautilus has been a lifelong ambition, representing the zenith of your aquarium keeping career, I wouldn’t automatically condemn your choices—although you’ll now also have to make sure your pet nautilus was collected and exported with the proper CITES permits. But I will argue that captive-bred cephalopods such as Dwarf Cuttlefish (Sepia bandensis) are likely to be far more engaging and rewarding aquarium inhabitants.

To learn more about keeping cephalopods in an aquarium, visit The Octopus News Magazine Online (TONMO), where you’ll find a vibrant community of ceph-heads waiting to answer your questions and steer you in the right direction.