The home aquarium industry is seeing a shift towards smaller “nano” exhibits that replicate complex coral reef ecosystems. As such, the market is seeing a surge in the demand for smaller fish species, such as gobies. Due to their small size, vibrant coloration, and unlikely partnership with pistol shrimps, the Yasha Goby (Stonogobiops yasha) is one of the most sought-after tropical marine gobies. However, due to the cryptic nature (cave-dwelling) of the Yasha Goby, hobbyist demand far outweighs the sporadic supply of individuals collected from the wild. Furthermore, those that do enter the trade are often emaciated and in poor physical condition.

The Marine Ornamental Aquaculture program at Roger Williams University currently maintains nine bonded pairs of yasha gobies, each in separate 10 gallon tanks within a recirculating broodstock system. The gobies were obtained last spring and over the last year, a team of undergraduate students led by Joe Szczebak, Brad Bourque, and Dr. Andy Rhyne (and funded in part by Rising Tide Conservation) has paired and conditioned the Yasha Gobies to spawn in a culture-friendly setting void of the deep sand bed and live rock habitat normally associated with these gobies and their symbiotic shrimp. 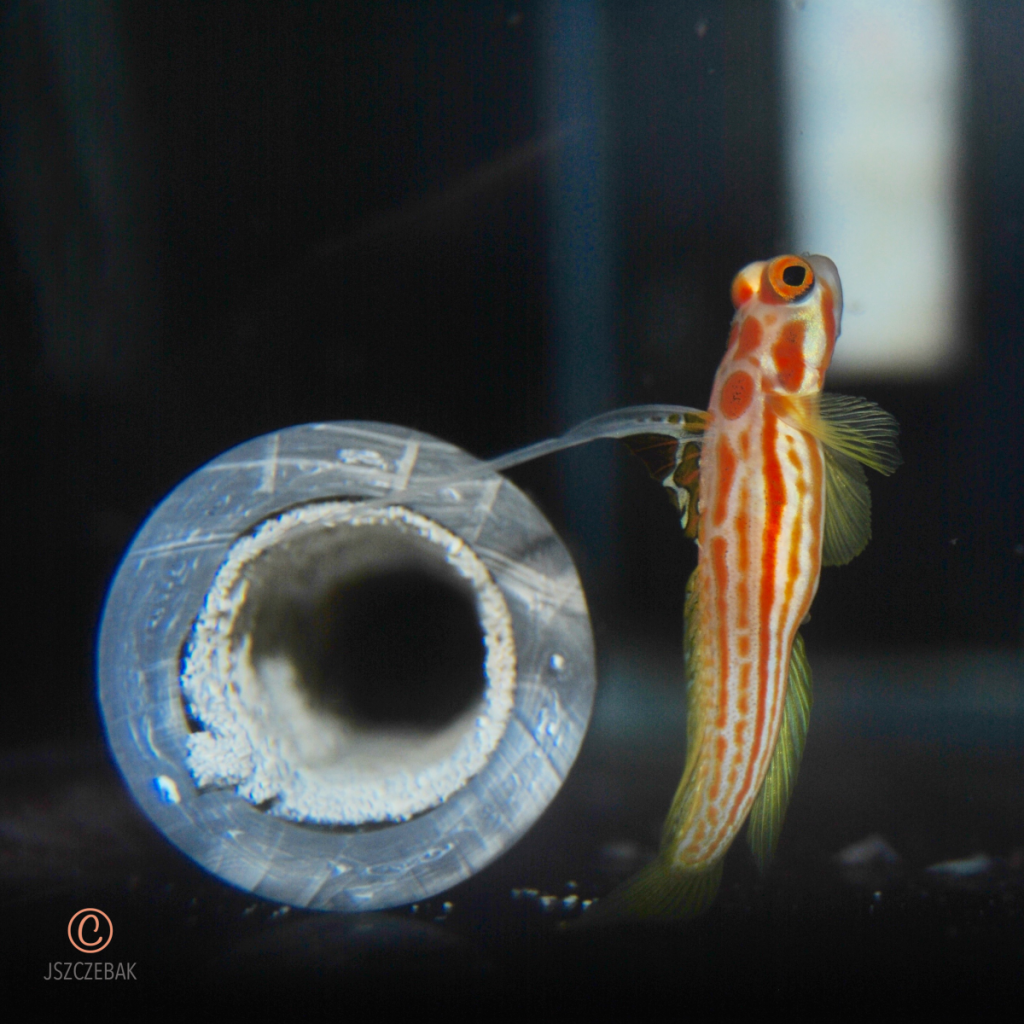 A mature female Yasha Goby Broodstock with 1″ pvc pipe as a surrogate borrow. 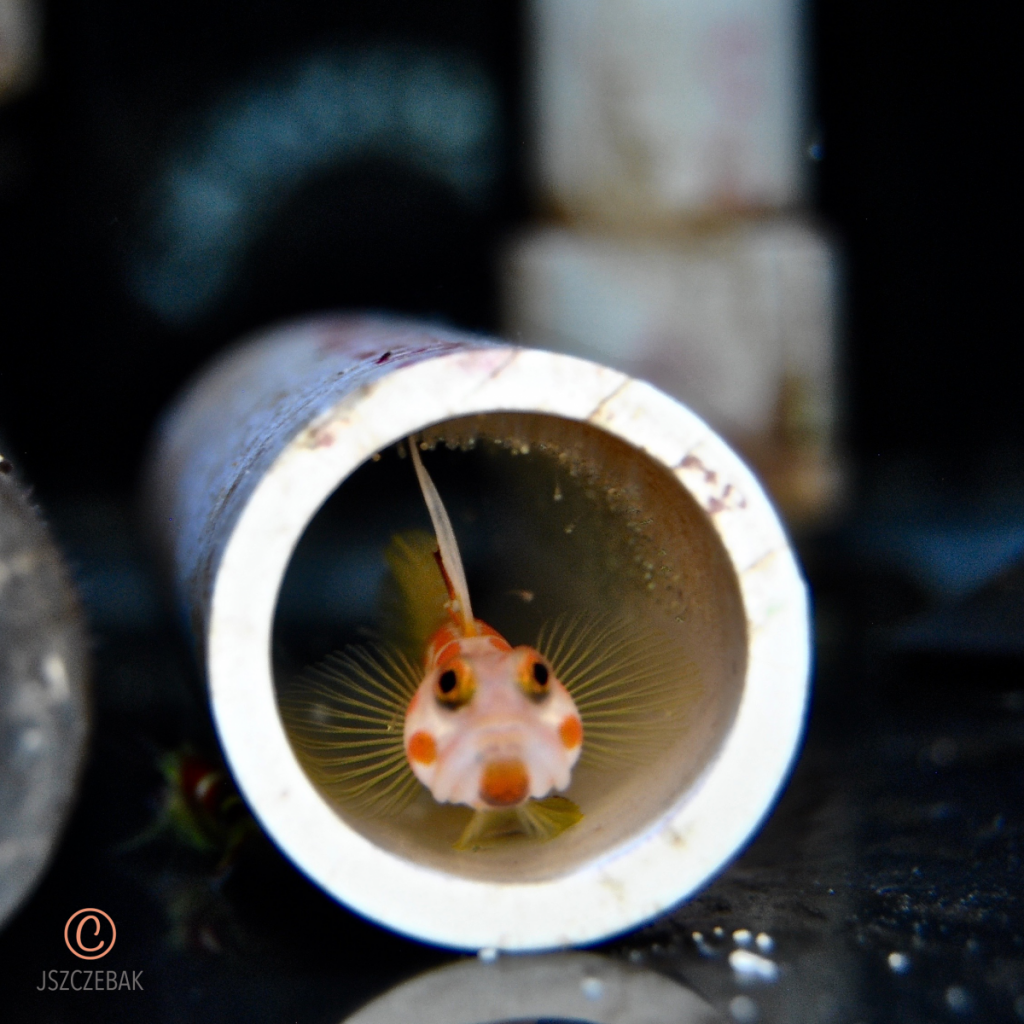 A male Yasha Goby stands guard as larvae hatch from the nest.

The broodstock system is maintained at 82°F with a salinity of 34 ppt and pH of 8.2. The gobies are fed 5+ times a day a variety of fresh and frozen seafood. Five of the Yasha Goby pairs reside with their naturally occurring symbiotic shrimp (Alpheus randalli). Each tank has two 1-inch PVC pipes as artificial burrows for the symbionts.

Over the last several months, six of the nine pairs have started regularly laying nests that hold, on average, 100-500 eggs. Recently, the team removed one of the nests and hatched it in a Modular Larval Rearing (MoLaR) system designed by RWU and the New England Aquarium. After 6 days of incubation, 75% of the nest (~100 larvae) hatched and the day 1 larvae measured 2-3 mm TL and immediately took to a diet of Parvocalanus sp. copepod nauplii. Larvae measured 3.5-4 mL by day 6 and completed flexion by day 10 at a size of 4.5-5 mm. Larvae started settling around day 30 and metamorphosis began at day 35-40 at 1-1.5 cm. By day 55, all larvae were metamorphosed. In total, 38 juveniles were reared from this first attempt. 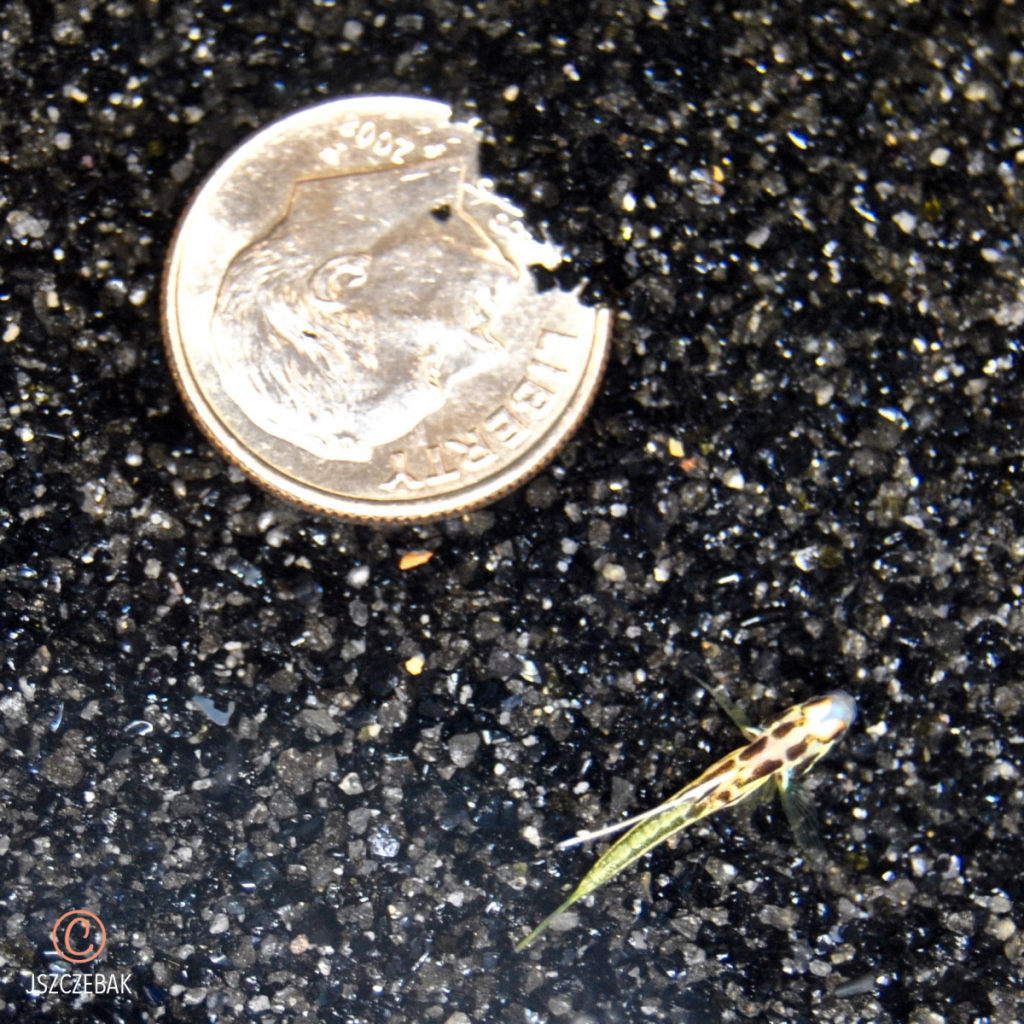 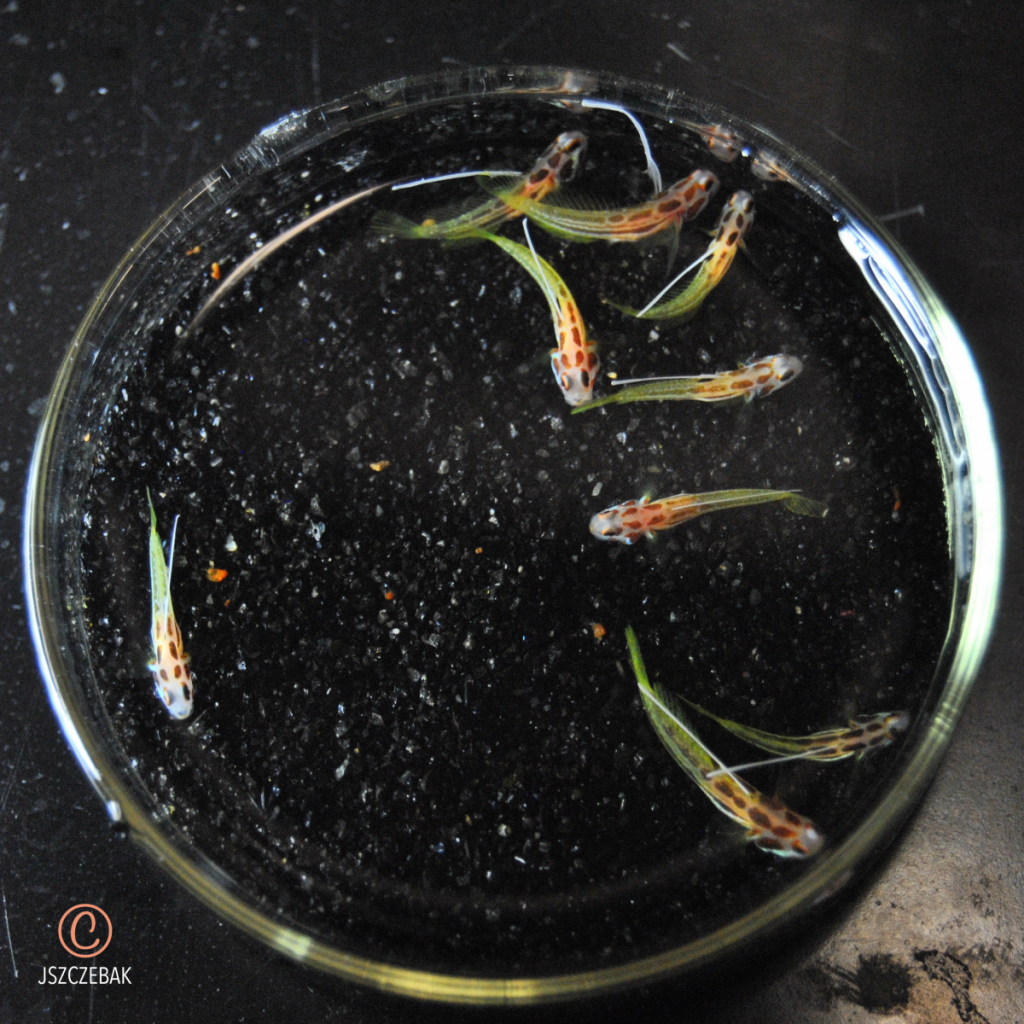 The team has numerous cohorts of larvae (larger spawns too!) in the pipeline and is attempting to answer many crucial questions about larval development (e.g., settlement cues) while fine-tuning larval rearing techniques.

Roger Williams University (RWU) is a student-centric liberal arts institution in waterfront Bristol, RI. The RWU Center for Economic and Environmental Development (CEED) offers undergraduate students the unique opportunity to conduct hands-on applied research in all aspects of aquaculture, including the culture of marine ornamentals, with an emphasis on new species and culture bottlenecks. The program offers an Aquarium Systems minor, numerous independent research opportunities, and internships with The New England Aquarium, the Audubon Society, and many more. Currently, the Marine Ornamental Aquaculture program at RWU is using, amongst other criteria, global trade data on marine ornamentals to determine suitable species for commercial-scale culture.