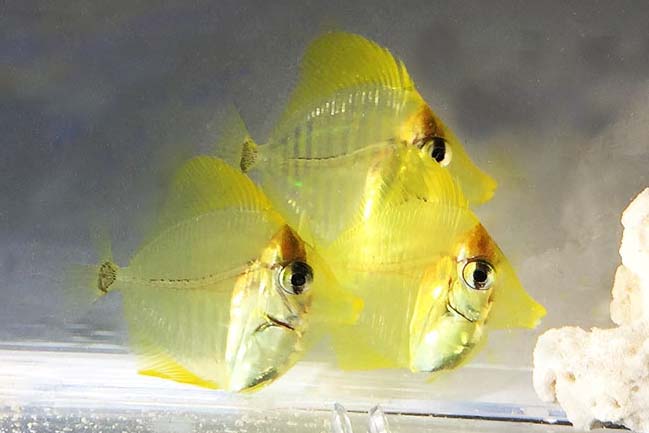 Part of the successful first batch of captive-bred Yellow Tangs to reach metamorphisis are thriving in a lab at the Oceanic Institute at Hawaii Pacific University. Image: Emma Forbes/OI.

With the aquarium world still buzzing over the October 20th announcement of the world-first success in the captive culture of Zebrasoma flavescens, researchers at the Oceanic Institute of Hawaii Pacific University tell CORAL that their historic class of juveniles are continuing to develop and thrive.

“We have between 100 and 150 juveniles,” says Dr. Chatham K. Callan, lead researcher in the multi-year project and director of the Finfish Program & Affiliate Faculty at the Oceanic Institute, located in Waimanalo on Oahu’s southeastern coast, about 16 miles east of Honolulu. “They are mostly all solid yellow now and doing very well!” 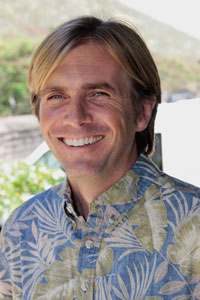 The captive culture of this species has been the focus of intense efforts by different researchers and entrepreneurs for many years, with the Yellow Tang representing one of the most popular marine reef fishes sold in the aquarium trade. It is also the one with the most-vulnerable source of supply: the Hawaiian Islands, where activists annually attempt to have the aquarium fishery shut down or severely curtailed.

According to the Oceanic Institute, Hawaii is the main supplier of Yellow Tang to the aquarium trade worldwide, with an estimated 300,000 to 400,000 individual Zebrasoma flavescens exported annually. This represents approximately 80 percent of the total aquarium trade exports from Hawaii and is the mainstay of what state resource managers and biologists say is a healthy, sustainable fishery.

Bottlenecks Overcome
Success in this project, funded in part by the Rising Tide Initiative, NOAA, and other entities, comes after years of frustration, failure and the seemingly insurmountable challenges of rearing a pelagic-spawning marine species with extremely tiny eggs and larvae. Dr. Callan, known to all as Chad, says that the work will be described and published in a scientific journal, as well as in popular articles in CORAL and other publications.

Among the hurdles overcome were the production of reliable supplies of viable eggs, with research starting at OI in 2001. Once hatched, the larval tangs proved stubbornly uninterested in feeding. In a report in Global Aquaculture Advocate in January/February 2013, Callan and others reported that a local Parvocalanus sp. copepod was found palatable by the larvae. The breakthrough came through trial and error, in which the team discovered that particularly small, early naupliar stage of the copepod was needed and that it had to be offered to the Yellow Tang larvae in carefully orchestrated water movements in their larval rearing vessels. 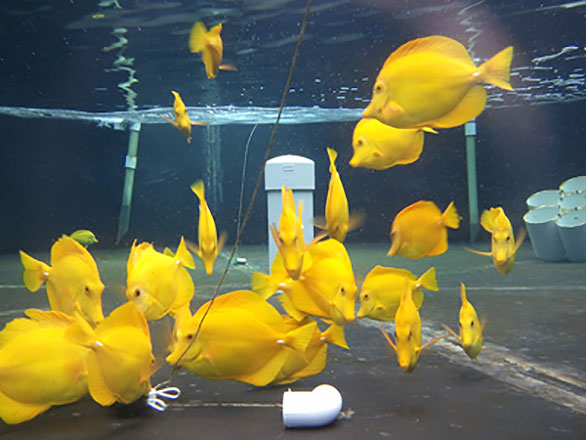 Wild-caught Yellow Tang at the OI labs. Activists are currently calling for a ban on all exports to the aquarium trade, which currently relies on Hawaii as its primary source of this species.

Commercial Production: Not Anytime Soon
Callan says that there are two more batches of young tangs in the pipeline, and that much work on production protocols remains to be done.

Survivors of the first class to reach metamorphosis have not yet had their futures decided, but some may make their way to public aquaria for display purposes.

“There are no plans with commercial operators as of now,” he says, and no one is lined up to adopt or license the culturing protocol. “Commercial feasibility is still a ways off. This is only the beginning!” says Callan. “I’m scheduled to give a talk at the Aquaculture America conference in February on Yellow Tang and hope to have something written for CORAL early in 2016.”

Go Fund Me
A crowd-funding campaign is attempting to raise $25,000 to help support ongoing research by the OI team.
https://www.gofundme.com/q87hbvaw