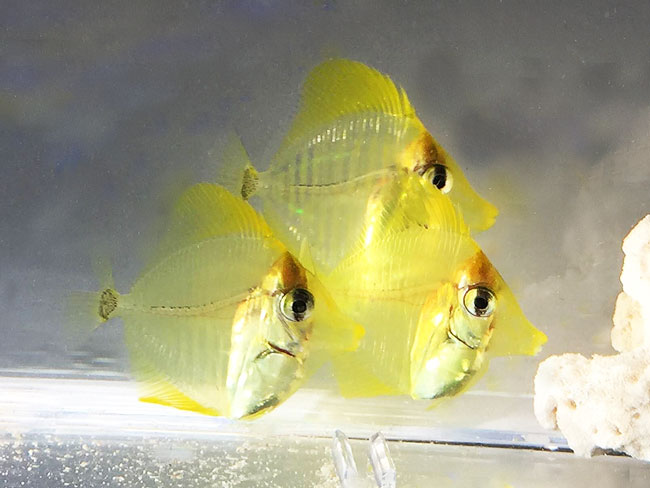 It was then that the Oceanic Institute of Hawaii Pacific University in Waimanalo, HI, dropped the big one, announcing their success with being the first in the world to achieve a long-coveted marine breeding breakthrough.

It is difficult to overstate just how big a deal this is for the aquarium industry, where there have been multiple rumors of “captive-bred” Tangs and Surgeonfishes over the years that failed to hold up under scrutiny. Most rumors confused the tank-raised Palette Surgeonfish (Paracanthurus hepatus), aka Blue Hepatus Tang, Regal Tang, Hippo Tang, aka “Dory” from the film Finding Nemo, as being captive-bred. These post-larval collected tank-reared fishes (spawned by wild parents and collected for rearing in tanks) are routinely lumped into listings featuring other captive-bred fishes, which causes added confusion between the distinct marine trade terms “tank-raised” and “captive-bred”–which many consider synonymous, when in fact they’re not.

Rumors of breeding successes with P. hepatus have arisen multiple times out of Asia, but they’ve always lacked the proof (including photographic evidence) required to validate these claims. In short, with only claims being announced, and little if any documentation to back them up, these are routinely dismissed as issues of optimism and translation woes. That is to say, a researcher’s definition of “successfully bred” might actually mean “successfully spawned” or “reared to 9 days.”

Now, all of that has changed. The ample documentation and years of work put into the culture of Zebrasoma flavescens by reasearchers in Hawaii solidifies the claims…and this is only the beginning.

The Enormous Effort to Break The Tang Breeding Barrier

Indeed, multiple aquaculture efforts in the U.S. have been chasing the captive-bred Tang Dream, some for over a decade, with Hawaii being a hotbed of focus for the culture of its favorite native reef fish, Yellow Tang, for a long time. In 2014, Callan noted that “Research on culturing Yellow Tangs began at the Oceanic Institute [OI] back in 2001 around the same time as initial, exciting breakthroughs were achieved with dwarf angelfish [by OI and others like Frank Baensch and Karen Brittain].”

Syd Kraul of Pacific Planktonics, part of that groundbreaking Hawaiian Team from the early 2000s, had reported spawning and attempting to rear the Yellow Tang as early as 2004, and held the record of survival at 42 days post-hatch since late 2005 / early 2006. That record stood for a long time, probably until 2014 when OI finally broke it.

Rising Tide Conservation made both Z. flavescens and P. hepatus prime target species since 2011, and Yellow Tangs were added to broodstock tanks at the Tropical Aquaculture Laboratory (TAL) at the University of Florida in late 2011. More recent updates suggest that the rearing of P. hepatus to 15-20 days post hatch is now almost routine at TAL.

Sustainable Aquatics has one of the larger publicly-known private efforts to culture tangs underway in Tennessee, with large broodstock aquariums housing tangs. Most notably, the Red Sea Purple Tang, Z. xanthurum, is one of their target species. They are also working with P. hepatus, and around a year ago some interesting details about larval feeding were shared by John Carberry at a local Minnesota event.

Of the private hobbyist efforts, the most notable is that of Darren Nancarrow, an Australian hobbyist and Marine Breeding Initiative (MBI) participant. He has possibly reared P. hepatus at home as far out as 60 days post hatch, all documented online at the MBI as it happened.

These are just the highlights, and MASNA’s Palette Surgeonfish Program webpage offers extensive details on the efforts of researchers, aquaculture firms, and individual hobbyists, all pursuing the same goal of culturing either Paracanthurus hepatus or Zebrasoma flavescens; it’s definitely worth a read (and now it would seem it’s definitely in need of an update, too!).

We expect more details will be coming from the Oceanic Institute, and we’ll keep you up to speed on all the latest developments in this groundbreaking project! 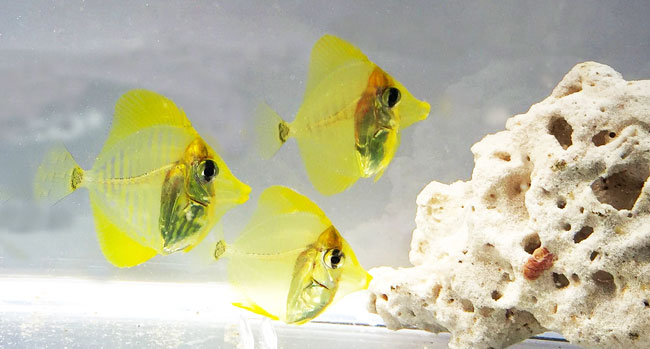