“A titan among dwarfs,” is what scientists Henrique Varella and Mark H. Sabaj Pérez are calling Apistogramma kullanderi, the newest member of a popular genus of dwarf cichlids and now the largest-known Apistogramma species. Those who have seen living specimens say it has glorious colors and is much more robust in body form than previously known “Apisto” species.

According to the authors: “A recent expedition to Serra do Cachimbo, Brazil, funded by the All Catfish Species Inventory (NSF DEB-0315963), discovered a striking new species of Apistrogramma. It was briefly noted and figured under the informal name Apistogramma “gigas” by Birindelli et al. (2009) and as Apisto­gramma sp. by Sabaj Pérez (2009), both popular articles.” 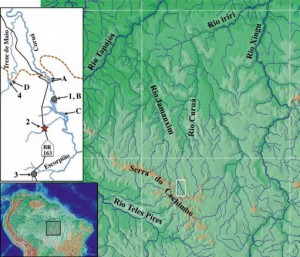 Map of the region west of Rio Xingu in a remote area of Brazil.

At a standard length of approximately 3.1 inches (8 cm) for males, this species hardly fits the usual definition of a dwarf cichlid. The authors have a theory that explains the robust scale of this species: “Apistogramma kullanderi is endemic to an upland watershed isolated by large waterfalls and depauperate of cichlid diversity. Under those conditions, we speculate that ecological opportunities, reduced competition and sexual selection contributed to the evolution of large body size in A. kullanderi.”

The species was named in honor of the influential Swedish scientist Sven O. Kullander, and comes from a geographically isolated area of the upper Rio Curuá (Rio Xingu basin) in the central Brazilian Serra do Cachimbo (state of Para). Dr. Sabaj Pérez first introduced this species to AMAZONAS readers back in 2009. 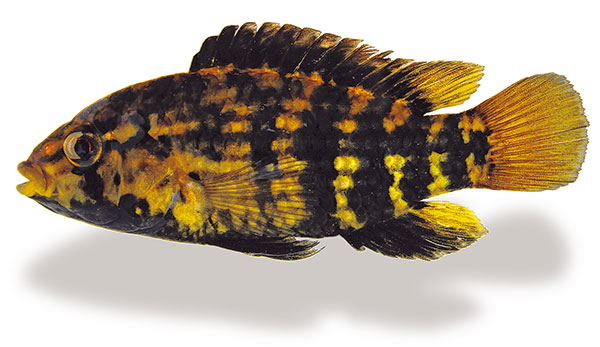 So far, it has not become available in the aquarium trade, which may be because it occurs in a very remote area, far removed from the harvest areas of aquarium-fish collectors. Both males and females of the species are gorgeous. The females in particular, with their dark vertical stripes, differ from most other species in the genus. 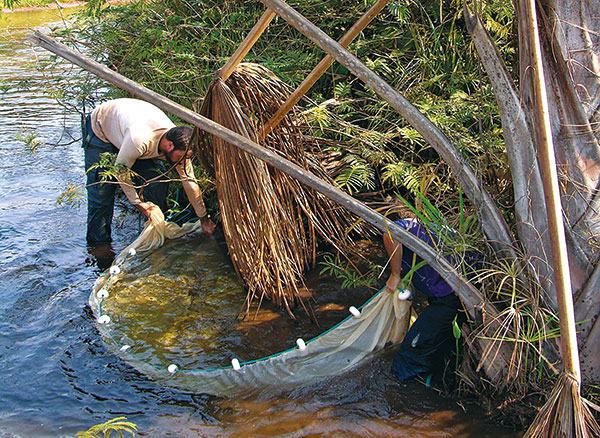 Collecting A. kullanderi specimens in a quiet pool in a nameless clearwater stream in the Serra do Cachimbo, Brazil, where they shelter under protective shoreline vegetation.

Dr. Sabaj Pérez is well-known in aquarium cichlid circles, and he is currently Interim Curator of Fishes at the Academy of Natural Sciences of Drexel University in Philadelphia. Henrique Varella is at the Museu de Zoologia da Universidade de São Paulo, São Paulo, Brazil.