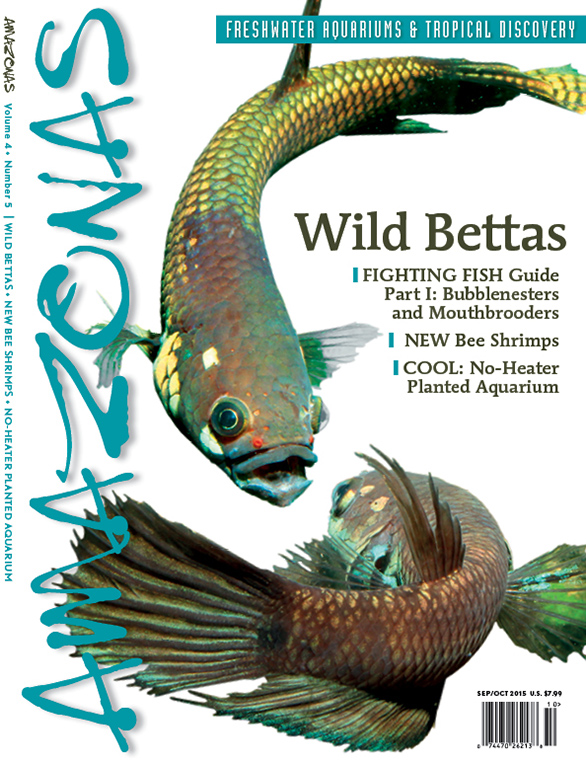 COVER THEME:  WILD BETTAS
Kids and school librarians may keep them in desktop vases, but members of the genus Betta can also be of great interest to keepers of rare fishes and, yes, an underworld of shadowy characters who carry on the ancient traditions of staging battles between highly bred fighting fish males. With this issue, AMAZONAS begins a two-part collection of articles on the genus Betta, which currently numbers some 73 diverse species.

Expert breeder Michael Schlüter covers an array of species, from Betta channoides to Betta persephone to Betta splendens in what promises to be a must-keep collection of profiles.  American aquarist Sumer Tiwari documents his experiences with the glorious Betta hendra, while Steve Waldron breeds the big, impressive Golden Dragon, Betta unimaculata.

In Part II: Matt Pedersen will a look at the thriving trade in fancy Betta splendens from Asia and from western breeders still working on varieties with mind-bogging finnage and pigmentation. He will present an exhaustive portfolio of the current forms of Betta splendens, while Mike Tuccinardi takes readers on a tour of an Asian Betta breeding farm.

Also forthcoming: Hans-Georg Evers looks at new, rare and unusual fish species coming into the aquarium trade from the Congo • Friedrich Bitter spots a number of new fancy Caridina spp. shrimps coming into the trade • George Farmer puts together a heaterless planted tank with ultra-hardy fishes, including Danios and Barbs, that is a model of simplicity • Michael Tuccinardi reports on a promising development at the IUCN, keepers of the Red List of Threatened Species, with a new initiative to work with freshwater fish collectors and the aquarium trade to protect tropical environments. And more: Lake Tanganyika Julidochromis marlieri and other African cichlids.