The Jewel of the Congo: Nanochromis splendens

One of the joys of owning an aquarium shop is having the ability to peruse the wholesale distributor’s stock lists and choosing the week’s fish inventory. Things like rare rasboras and wild Betta species from the peat swamps of Borneo, unusual cyprinids and dwarf loaches from Myanmar lakes, and dozens of desirable dwarf cichlids from Peruvian Amazon backwaters have been keeping my blood pumping lately. I have been involved with the freshwater hobby for over 30 years now and I must say, we are living in the heyday of the ornamental fish trade. The diversity of fish species that is now available to average aquarists from far-flung places around the globe is, in my opinion, unprecedented in the history of the hobby. Seeing the availability of so many obscure aquarium jewels makes me want to celebrate their beauty, and I hope to increase the awareness and appreciation of some of these rarities in future blog posts. Let’s start that celebration with a beautiful dwarf cichlid that recently graced the tanks at my shop, Aquarium Zen in Seattle:  Nanochromis splendens, a jewel of a dwarf cichlid from the Congo. 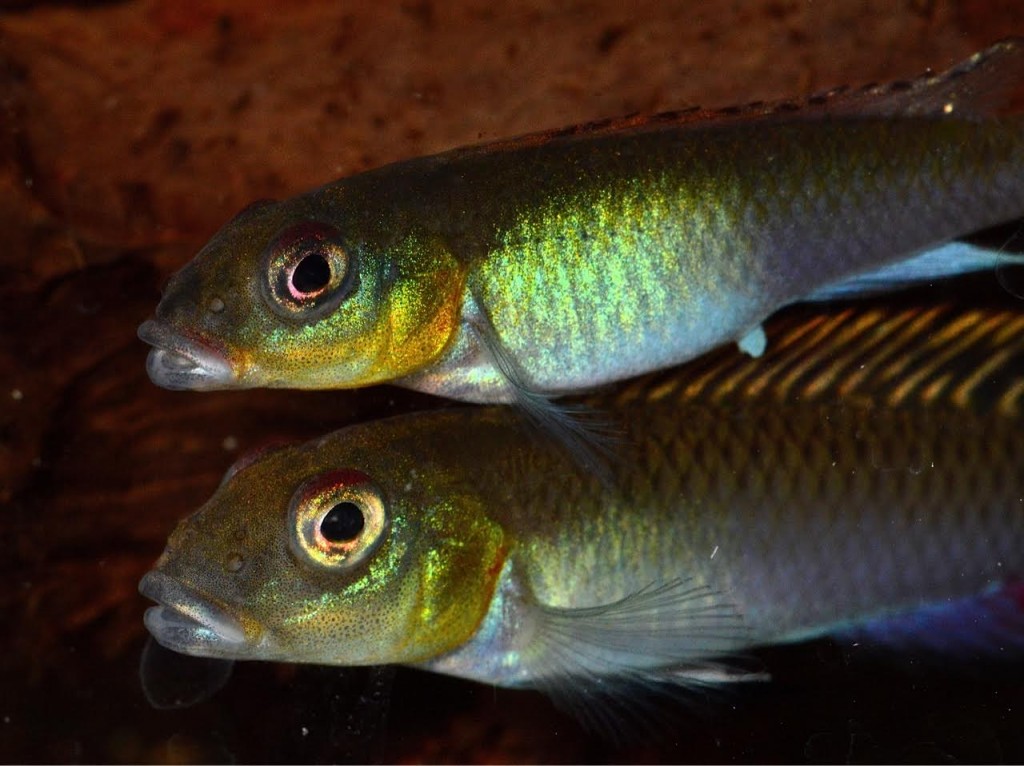 A beautiful pair of the Congo rarity, Nanochromis splendens.

As late as 2004, living specimens of Nanochromis splendens were unknown to scientists and aquarists alike. N. splendens comes from deep in the Congo where few outsiders dare to tread.  I received my first pair in the summer of 2014 through the efforts of Oliver Lucanus of Below Water and Steve Lundblad of the Cichlid Exchange. My immediate impression of the fish was that this was the most beautiful of all the Nanochromis species–a vivid swirl of iridescent pastels and emerald reflective scales dazzles the keeper of this fish. Nanochromis splendens is a wonderfully colored species that also carries a kind of elegance in its narrow body shape and overall comportment that is not obvious until you see the fish alive and in person. It is a true connoisseur’s choice. 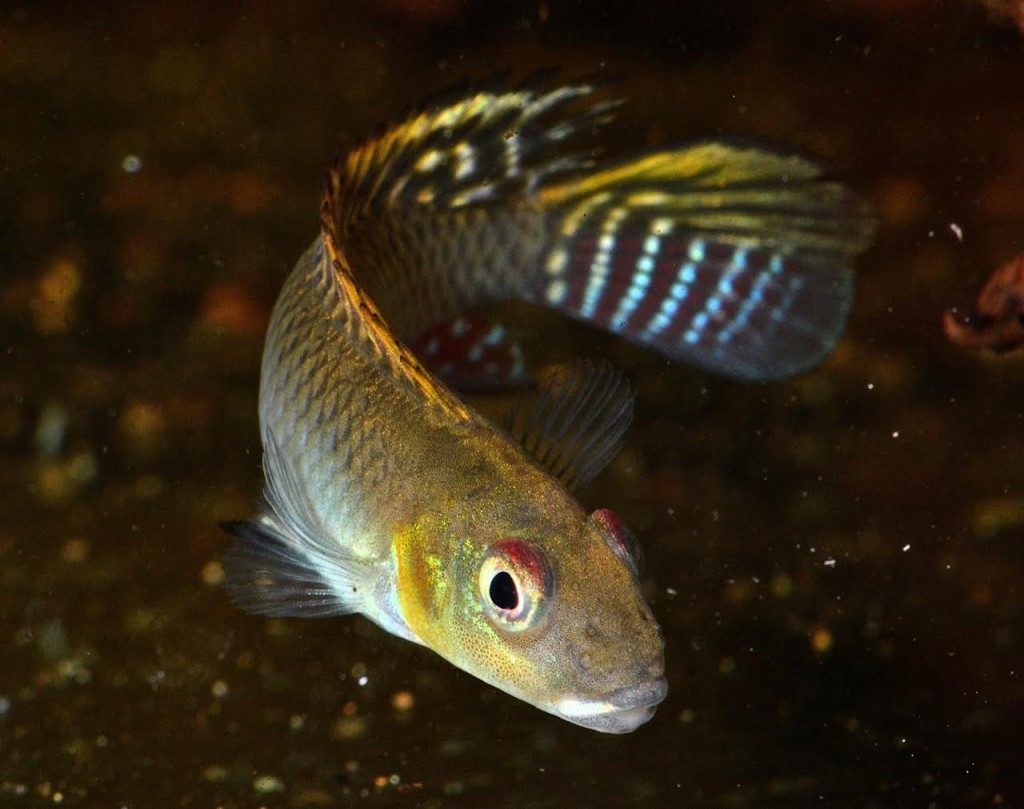 The unpaired fins of a male N. splendens are quite distinct from the female, and beautifully patterned. 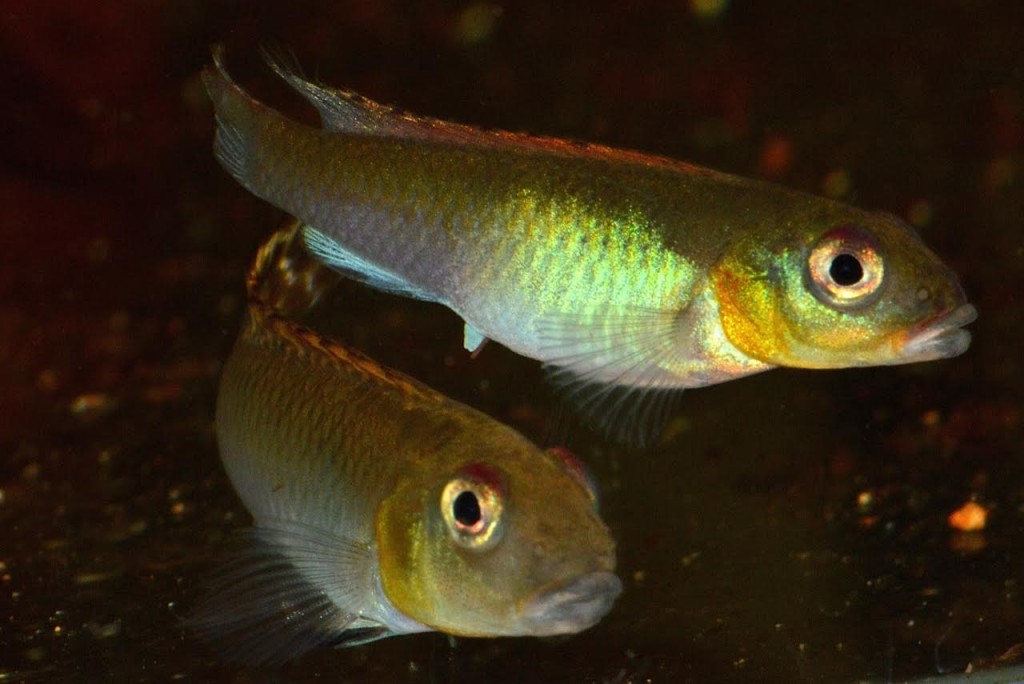 The belly of a female N. splendens is a prominent feature of the species. The belly shines in reflective green scales and her ovipositor protrudes even when not in spawning mode.

The male N. splendens is slightly larger than his mate, but both are diminutive fish, topping out at 2″.

I asked Oliver Lucanus to tell me a bit more about the fish. Here’s some highlights from our discussion:

SW: Where do Nanochromis splendens come from? Can you describe their biotope for us?

OL: “They live along the shoreline in the main stream of the middle Congo, roughly between the towns of Inga and Kiganga, together with Nanochromis parilus and downstream with Nanochromis consortus.” 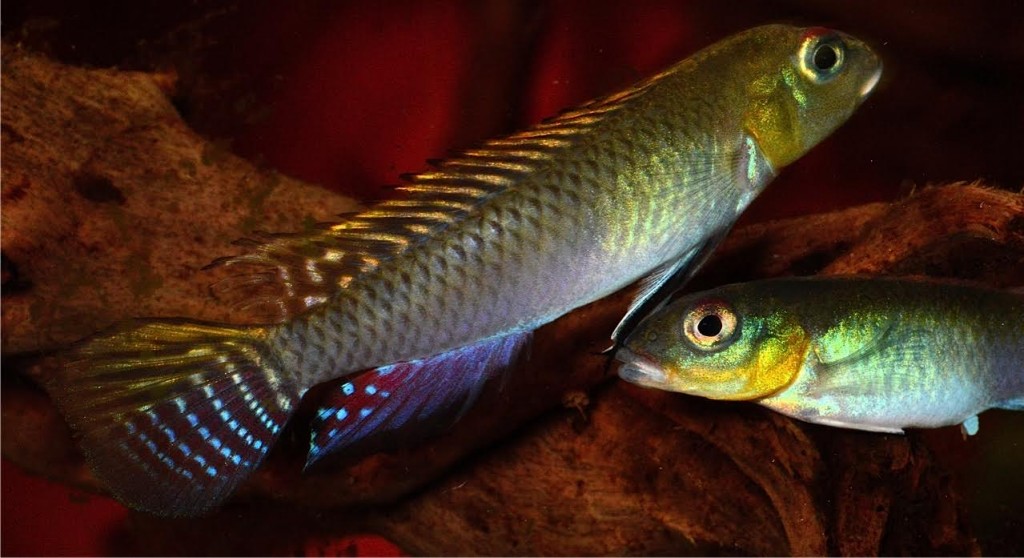 Another view of the splendid male Nanochromis splendens. 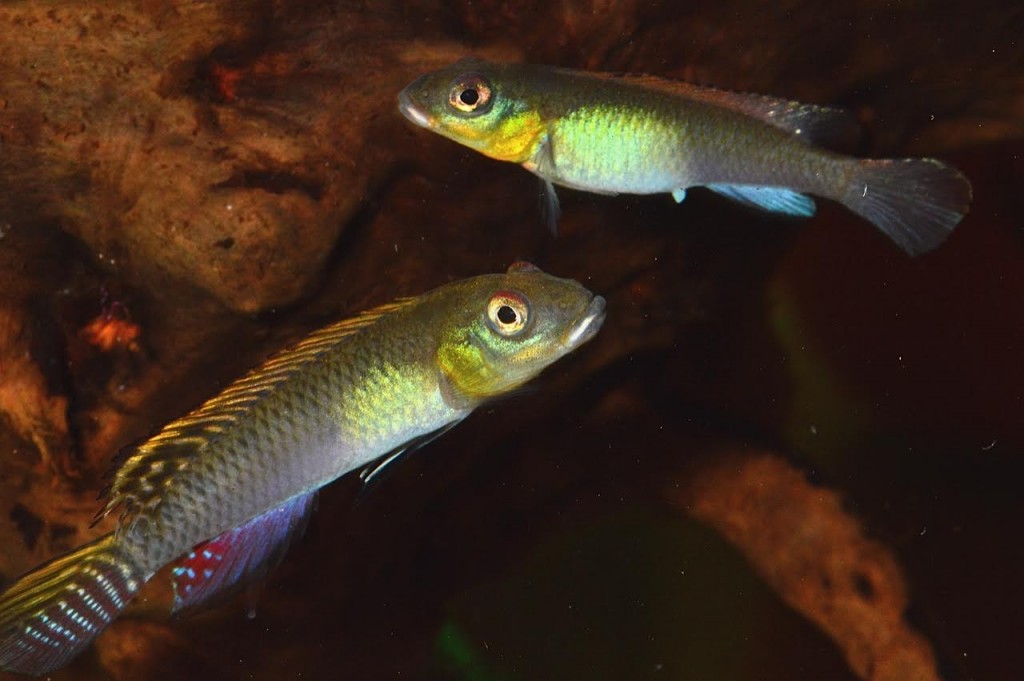 SW: Do you have any tips on breeding this fish?

OL: “Like all true Nanochromis, they should have plenty of hiding places, good current, and not-too-aggressive tank mates. They will not harm plants, but there are of course none in their habitat. As long as a pair gets high-quality food and frequent water changes, they are easy to breed. At one point, three pairs had young in a 30” cube in my office.” 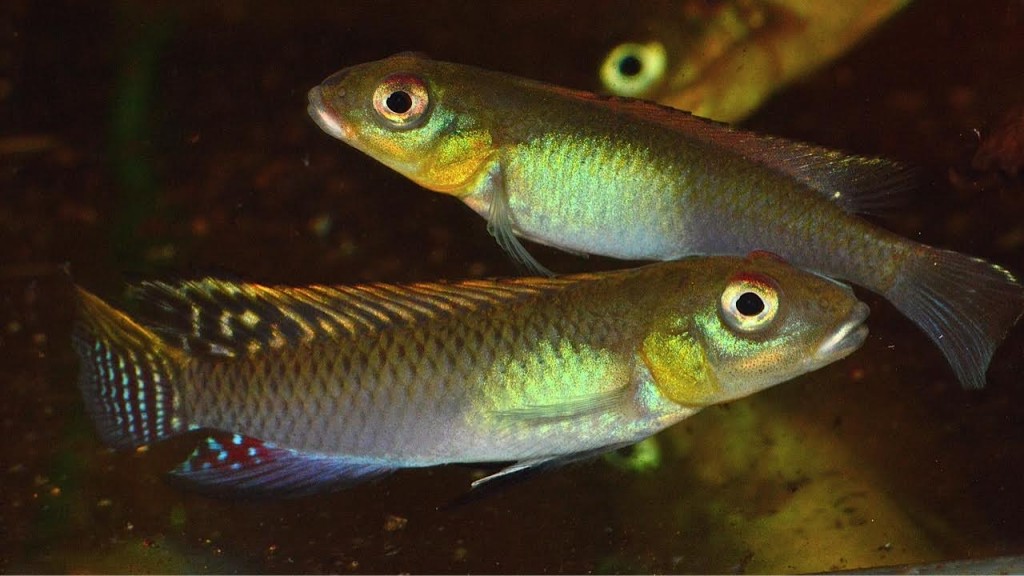 To effectively bond a male and female Nanochromis, I have found it useful to keep some other West African dwarf cichlids in the aquarium. Aggressive behavior is directed outward and the pair will work together at defending their territory, rather than squabble (or worse) with each other.

Once bonded successfully, a pair of N. splendens will always remain in close contact and parade through the aquarium together. 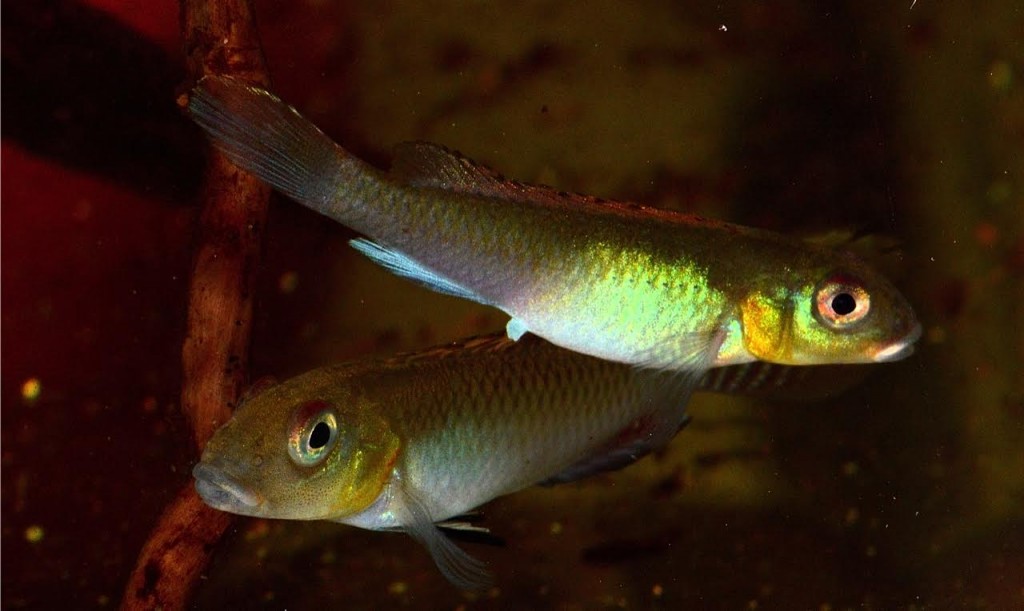 When a pair of N. splendens is ready to breed, they will retire to a cave and lay their concealed eggs. They are likely excellent parents.

I honestly didn’t have much time to work with my original pair until they found a home with one of my customers. Lately, I have been seeing lots of spawning reports of the species on Facebook groups, so it appears as Oliver suggested: that N. splendens is indeed a ready spawner. Let’s hope we see more of it in the future. Enjoy one more snapshot of this beauty: 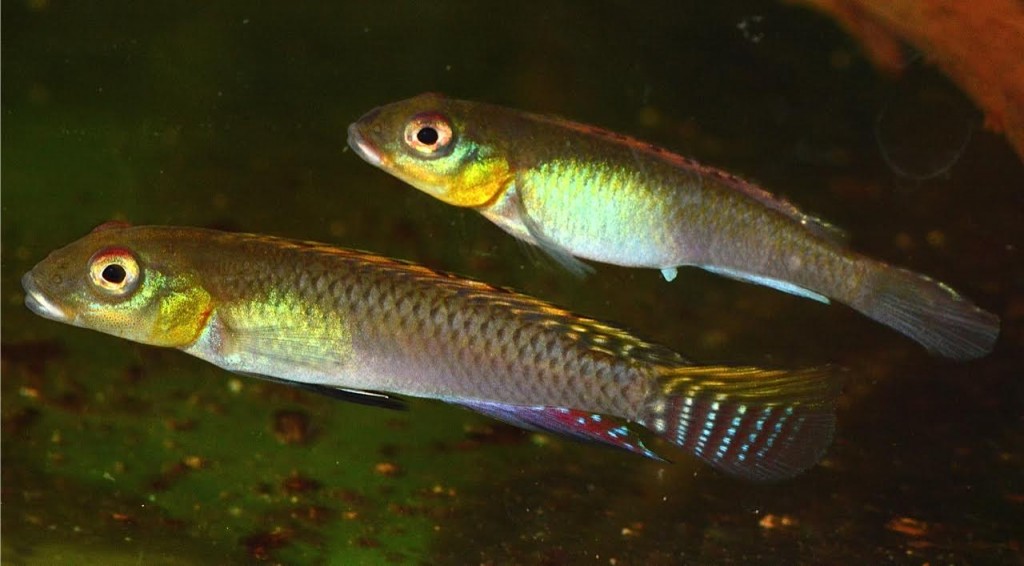 One last look at a male (bottom) and female Nanochromis splendens.