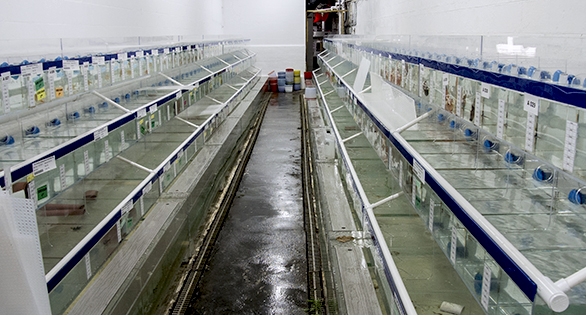 The new softwater system at Segrest Farms in Florida: hundreds of tanks and over 2,000 gallons

On my way to Brazil recently, I stopped in to visit my colleagues and former coworkers at Segrest Farms in Gibsonton, Florida. The facility is always worth checking out, but in the ten months or so since I had last been there, they have designed and constructed an impressive new system for housing freshwater fish from soft or blackwater habitats.

The new acrylic systems, roughly 1,400 gallons (5,300 L) each, span both sides of a long hallway and consist of over 260 individual tanks of various sizes. The addition of this holding area will allow the Tampa-area wholesaler to significantly expand their offerings of fish which require warm, soft water—like many popular South American species. 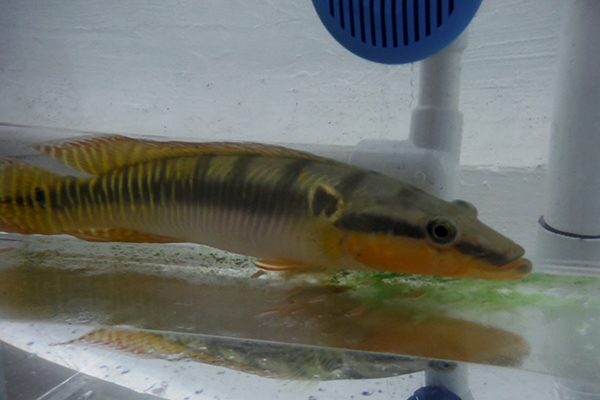 Segrest is located in the epicenter of the US tropical fish farming industry, and like most farms there relies on vast freshwater aquifers under the limestone-based Florida earth. That limestone greatly impacts the chemistry and makeup of the water that passes through it, resulting in a very alkaline end product with a profusion of dissolved minerals. This sort of water is absolutely perfect for raising and holding fish like African Cichlids, Livebearers, and Barbs—but when it comes to dealing with fish which were recently collected from a blackwater stream with a pH of 4.0, such hard water can prove very problematic. Even after careful acclimation, fish like Satanoperca, some Corydoras, and others just weren’t able to thrive given the radical shifts in pH, alkalinity, and hardness.

For a home aquarist, this has a fairly straightforward solution: use R.O. water, a softener like peat, or perhaps collect rainwater. When you’re dealing with thousands of gallons at once, however, there is no simple (or at least cheap) way to achieve this goal. The solution was to install a massive reverse osmosis system (10,000 gallons per day), which provides most of the water for this system. But with the incredibly high mineral content of the groundwater, additional work was needed to ensure that the system worked efficiently and cost effectively. According to James Collins, Fish Health Manager for Segrest, “our source well H2O is degassed, passed through an isolated fluid bed, mechanically and chemically filtered, then softened”—all before being pumped through the RO system for further purification. 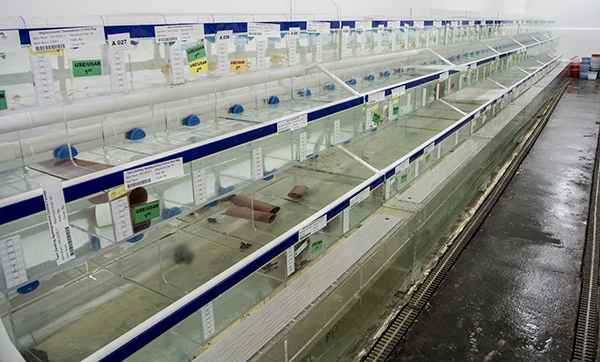 One side of the system, with three tiers of holding tanks for both isolation and group housing

After this, Collins continues, “the water used is blended. We reconstitute the water with a blend of filtered well and RO” before pumping the prepared water into the recirculating systems. The entire system is kept at a fairly low pH and higher temperatures, which presents some benefits but also potential drawbacks. With drastically reduced buffering capacity, the water in this system has the potential to experience huge swings in pH if not carefully monitored.

“Adequate aeration is key to keeping pH up and CO2 levels down”, Collins explained, adding that “many chemical treatments are actually much more effective in softened water”—one of the positives of keeping sensitive and more disease-prone fish in a system like this. 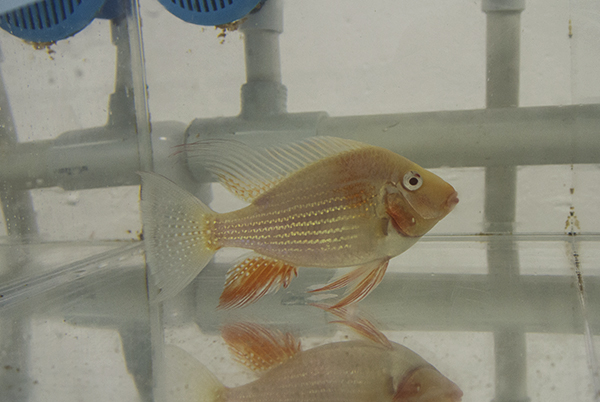 With this increased capacity, Segrest is clearly looking to improve the quality and quantity of its soft water fish offerings—but there is a very specific story as to why the company (which both farms and imports tropical fish) decided to invest in these systems. Sandy Moore, VP of Segrest Farms, explains, “we became involved with Project Piaba over two years ago, which has drawn our focus back to sustainable fisheries and the incredible diversity that the Amazon River has to offer.  By acclimating and housing these fish in softened water, we are able to improve the health and quality of the fish before they go to the retailer.  They’re conditioned long enough that they will not just survive, but thrive in the retailer and home environment.” Project Piaba is an organization dedicated to preserving and promoting the sustainable ornamental fishery on Brazil’s Rio Negro—and now many of the fish that Segrest imports from this region will receive improved acclimation and conditioning by way of this new system before making their way to local fish stores across the US. 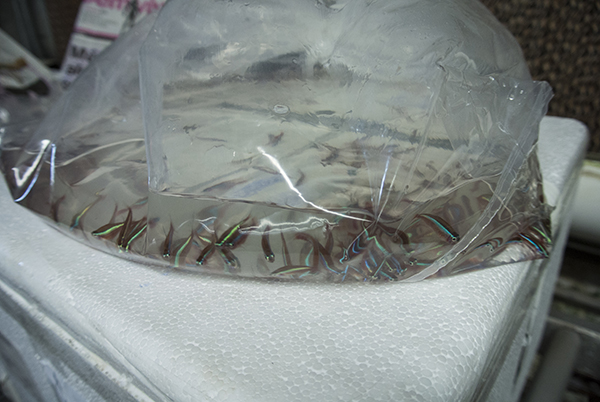 Freshly-imported wild Cardinal Tetras from the Rio Negro await acclimation and conditioning at Segrest Farms’ facility in Florida. With the help of their new holding system, blackwater fish such as these will fare much better as they make their way to retailers and home aquariums