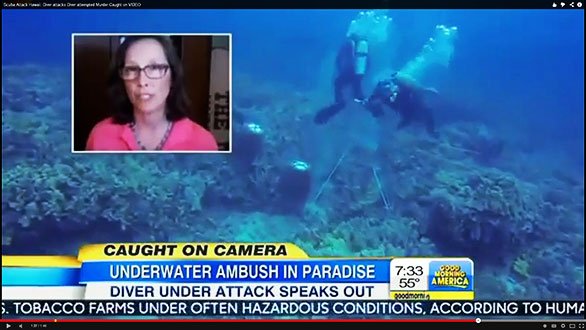 An underwater altercation between aquarium fishermen and anti-aquarium activists grabbed nationwide attention in May, 2014

House Bill 511 will likely be the second aquarium fish bill introduced to the State of Hawaii’s 28th Legislature. The Bill, which will be introduced by Representatives Cindy Evans, Nicole Lowen, Mark Nakashima, Richard Onishi and Joy San Buenaventura, would prohibit the harassment of persons marine fishing and aquarium fishing. The Bill also specifically addresses the enforcement of harassment “as a duty of a conservation and resources enforcement officer.” The first aquarium bill of 2015–SB 322, which would prohibit the sale of aquatic life for aquarium purposes–was introduced yesterday in the Senate.

HB 511 would amend the Hawaii Revised Statues to read:

In several cases, aquarium fishers have attempted to bring charges of harassment against anti-trade activists, but those cases are usually dropped because, according to state law, there is no regulation in place specifically against harassment of a fisher in the marine environment. While there is a provision for bringing harassment charges against an individual interfering with freshwater fishing, at this time, marine fishers have no such explicit protection. “There are still ways charges may be brought,” a source well-versed in state law told me last spring, “but it’s not as cut and dry as if a similar thing happened in freshwater.”

HB 511 would not “affect rights and duties that matured, penalties that were incurred, and proceedings that were begun before its effective date.” The Bill would become effective immediately upon its approval.

It is common for a number of bills relating to the aquarium fishery to be introduced each year in the Hawaii Legislature. In addition to HB 511 and SB 322, Representative Cindy Evans’s office confirmed she will be “introducing a bill that would enact a moratorium on aquarium fishing.” The cutoff date for bills to be introduced is 29 January. After a bill is introduced it will be referred to a committee or jointly referred to multiple committees. Stay informed about about the status of these bills and how interested parties can submit testimony by subscribing to The Good Catch Blog, liking The Good Catch Blog Facebook page or signing-up for the CORAL Magazine electronic newsletter and subscribing to the digital or print magazine.