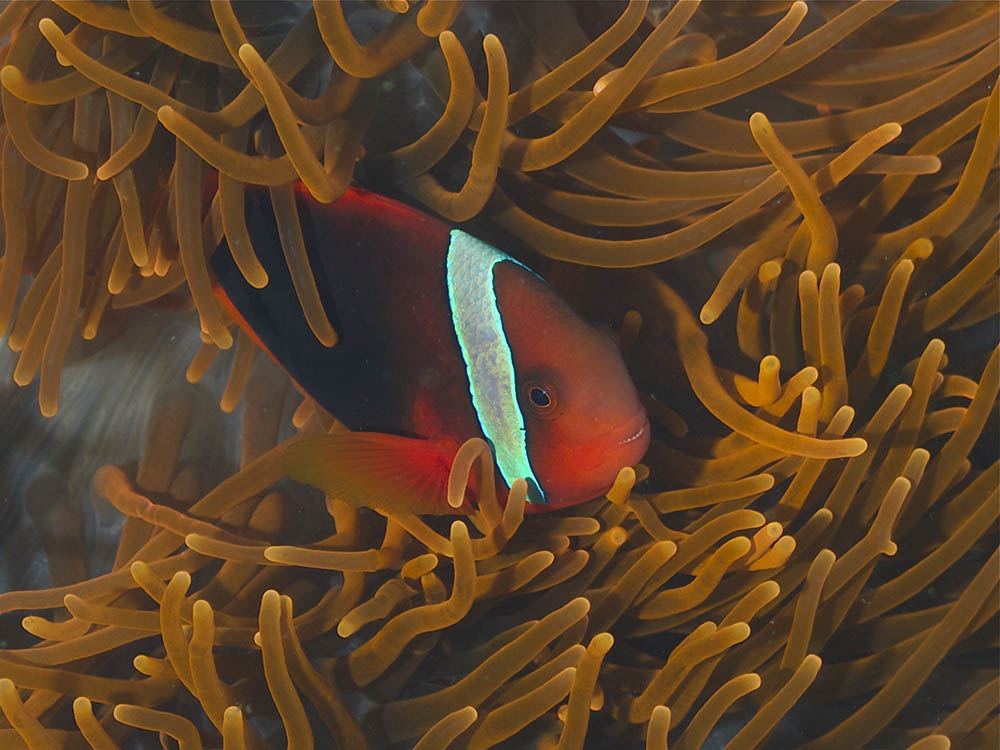 Amphiprion barberi – there is some documented variation within this fish in terms of how much brown coloration may develop, but overall this is probably more likely a function of age and/or social rank. It appears that old individuals may see a reduction/recession of the headstripe. The species has a limited range and would not be expected to have geographic variations associated with it. 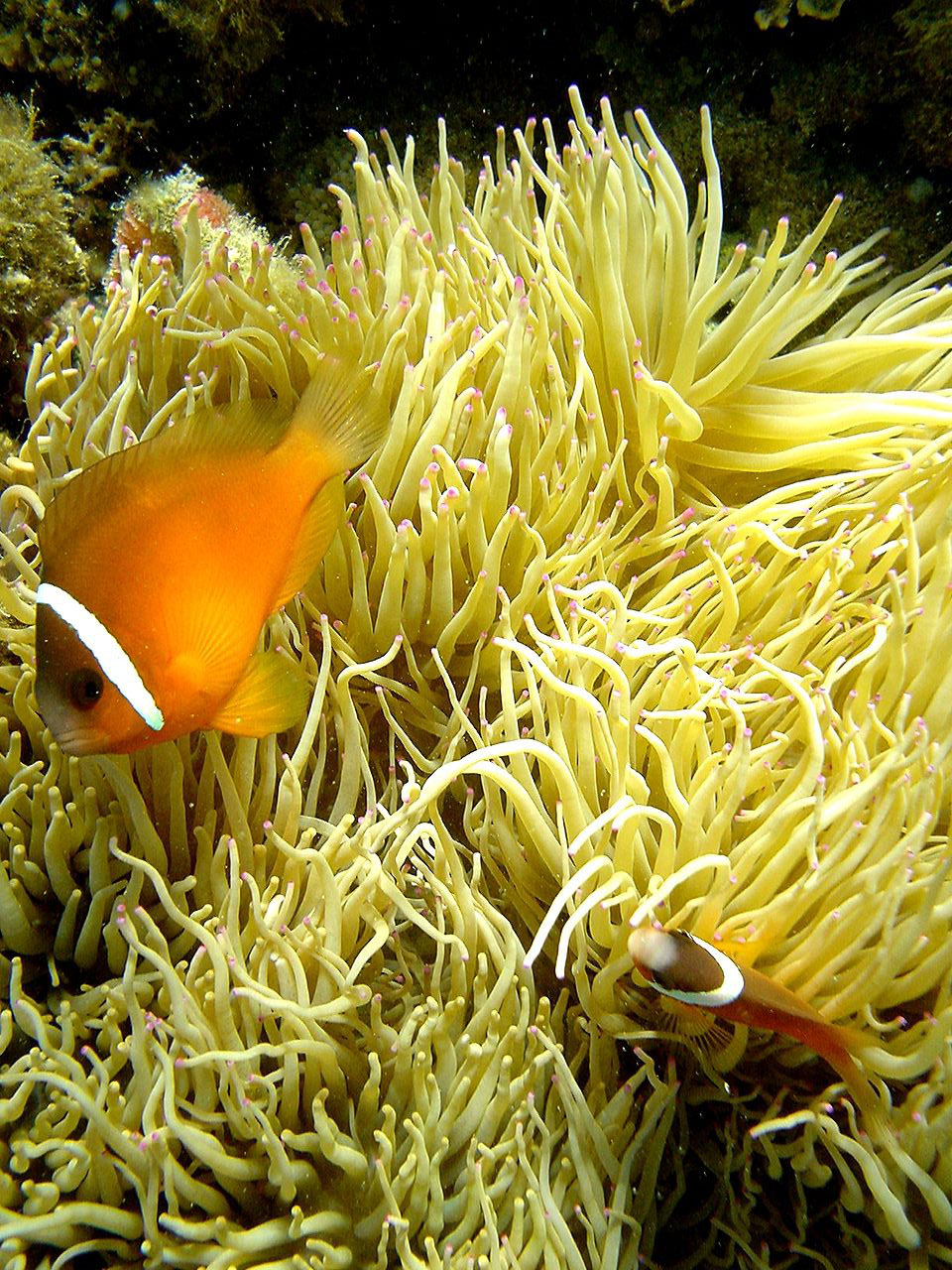 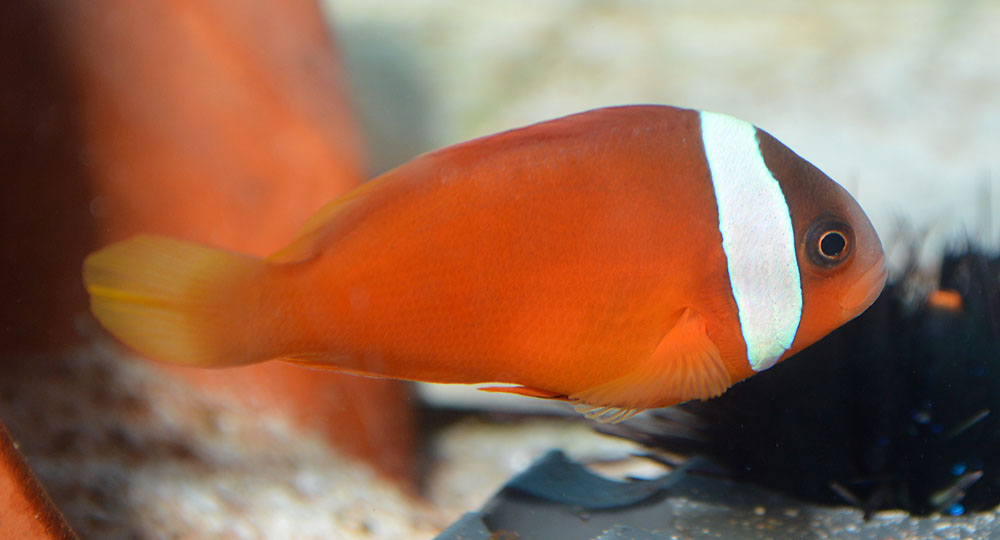 Another look at Amphiprion barberi; another specimen from Fiji, here in an aquarium. Image by Matt Pedersen

Amphiprion ephippium – the Red Saddleback or Fire Clown’s coloration varies wildly throughout its life, and individuals in captivity seem to often lack the well-defined black saddle mark seen in wild individuals. There are no known geographic variations or races within this species. 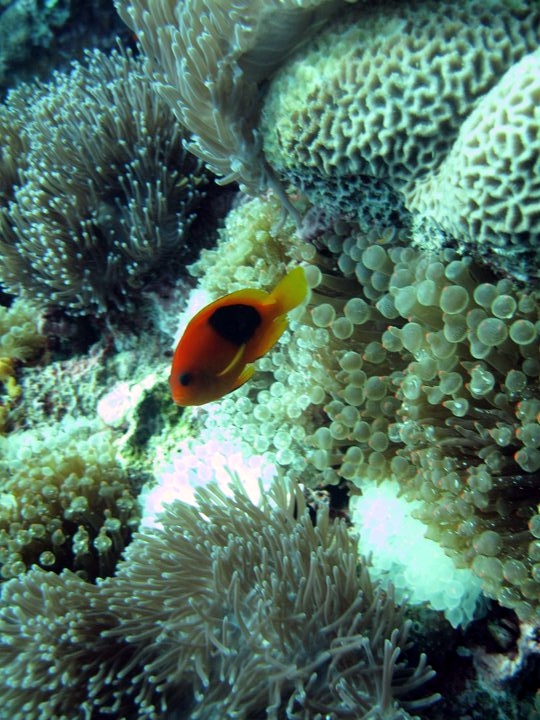 The Red Saddleback, or Fire Clownfish, A. ephippium, here in the wild at Thai Mueang, Phangnga, Thailand. Image by Flickr user hasteyr | CC BY 2.0 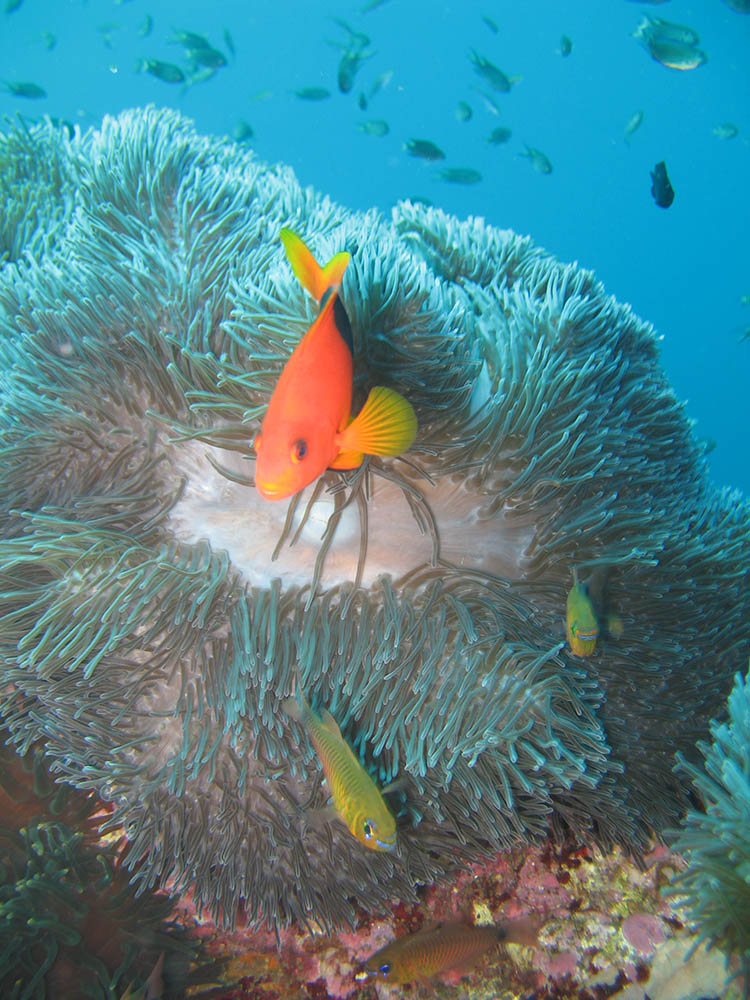 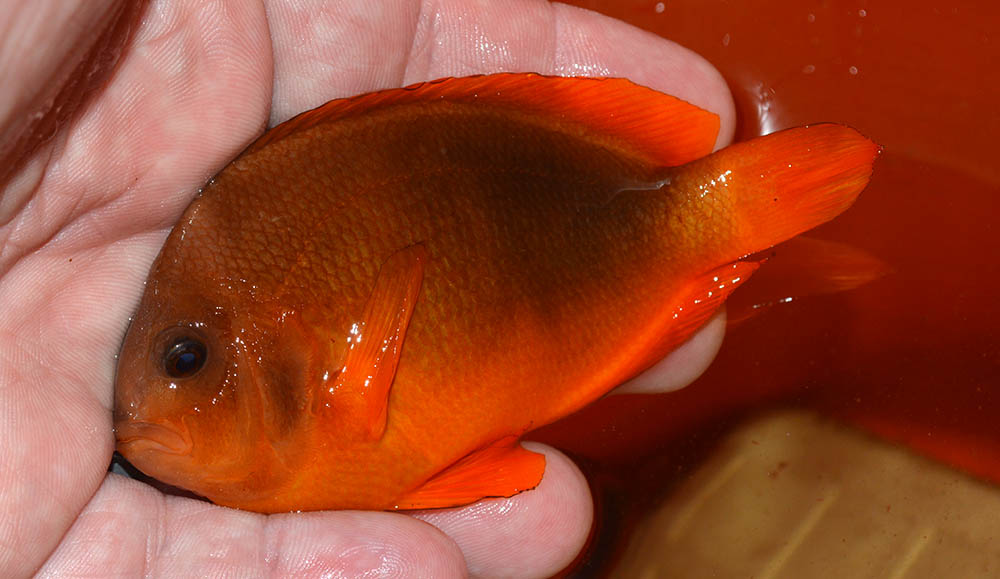 A large, mature female A. ephippium from Sumatra, in my fishroom, in captivity 4 years at the time of this photograph. Notice the lack of a high-contrast black saddle mark. Photo by Matt Pedersen 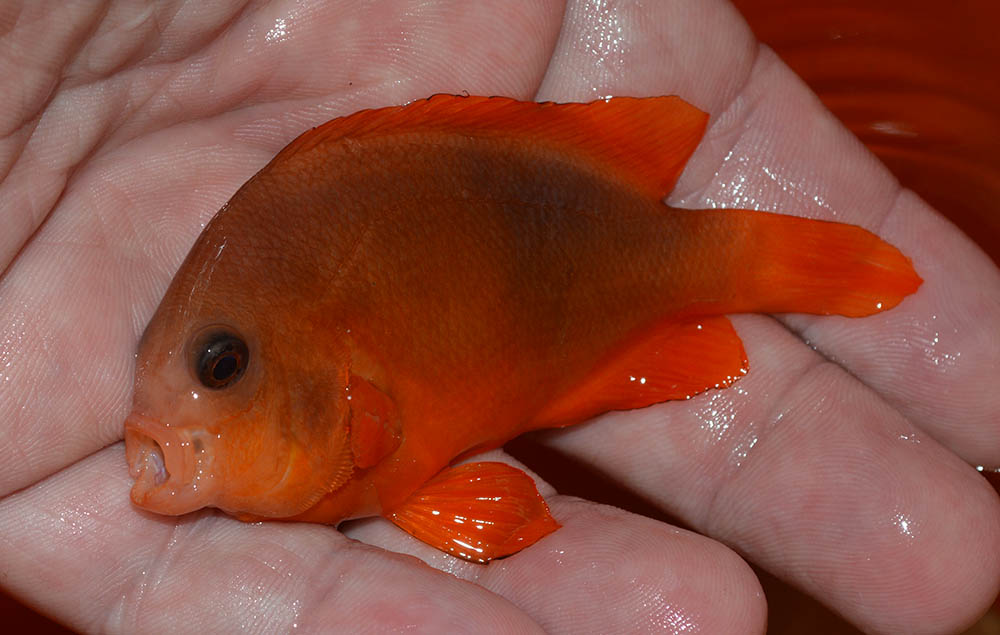 The male Sumatran Fire Clownfish to go with the above female; again, it lacks a crisp, defined saddle which is generally seen in fresh wild fish – it had it when young. Photo by Matt Pedersen

Amphiprion frenatus – A. frenatus is often confused with A. melanopus; it bears mentioning that their ranges don’t overlap, so if you know where your fish was truly collected, you’d be able to determine the species name quite readily.

#1. Tomato clownfish vary in coloration with age and social role; juveniles and males remain solid bright red and will have a black leading edge on their ventral fins, while females can turn almost solid black with red fins, often being confused for A. melanopus. Very rarely, Tomatos can have black ventral fins, but this has only been seen in old, large fish. Tomatos can have a blue-sheen to their headstripe, but this is not tied to geography. Red coloration can also vary, and some individuals have been shown that are more “maroon” in coloration. Tomatos are also known to potentially hold their early juvenile mid-stripe longer than other members of the complex; sadly, a Tomato Clownfish with two stripes should ultimately outgrow the extra. Furthermore, Tomatos have shown an uncanny ability to alter their coloration based on mood. 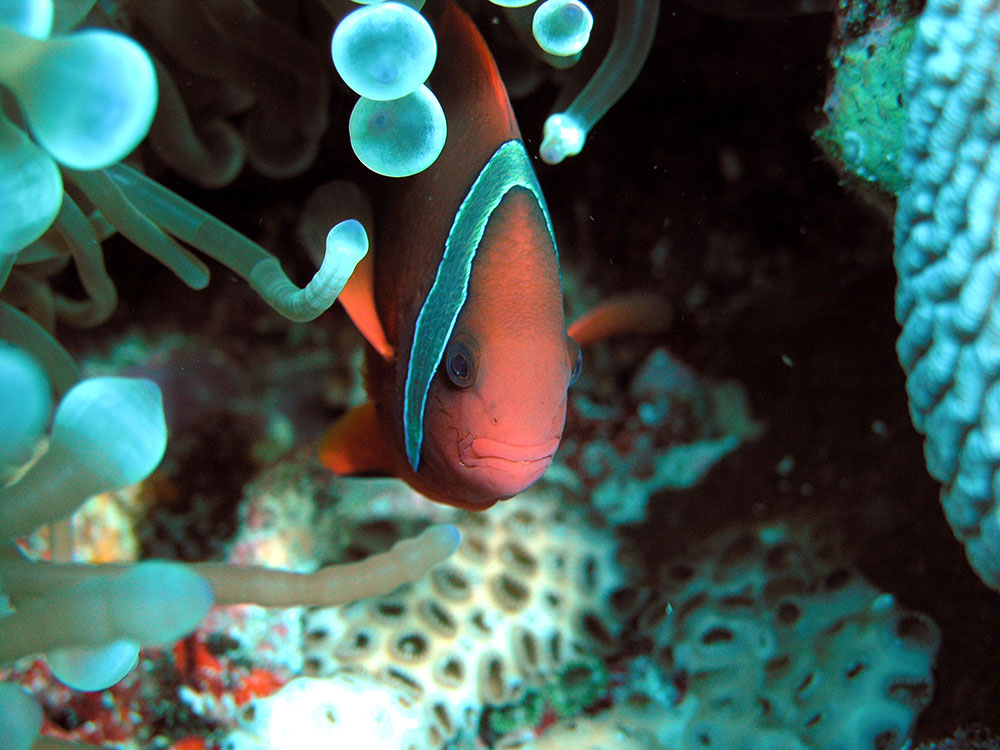 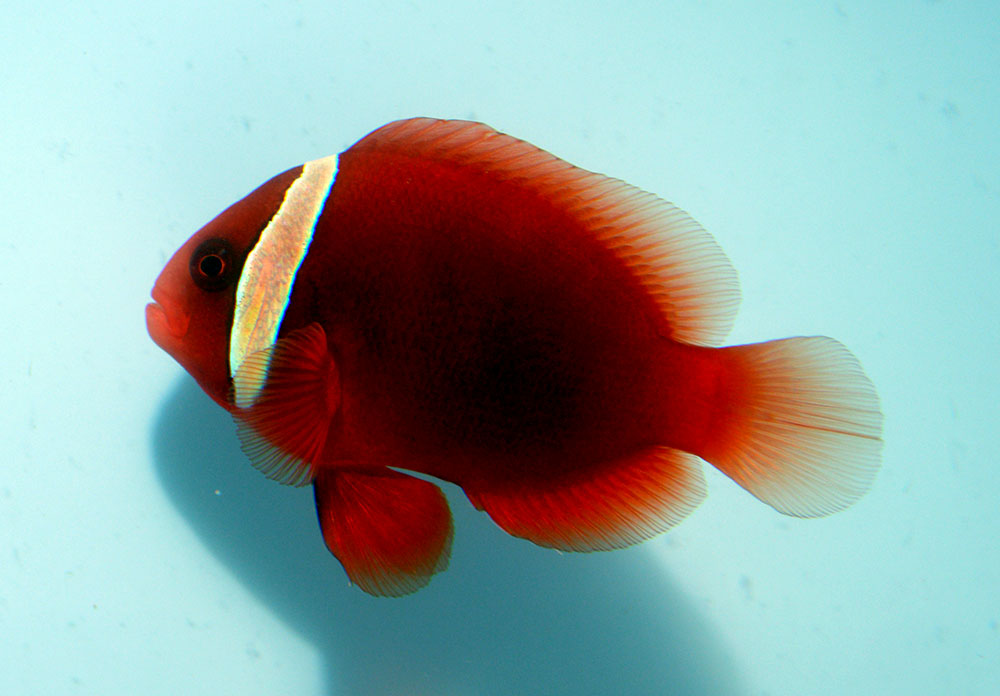 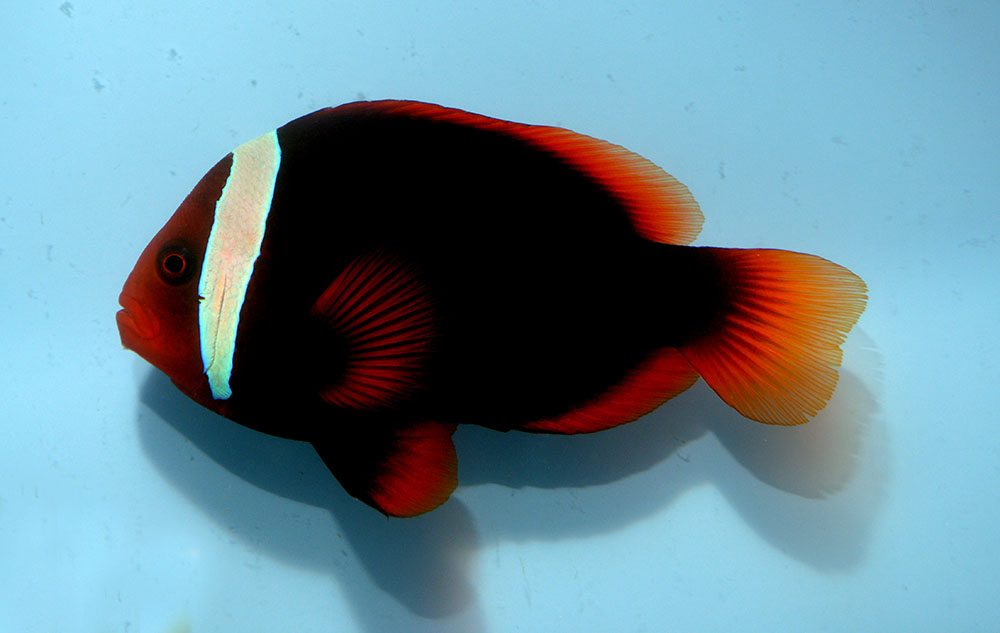 A large female Tomato Clownfish, A. frenatus, from the Philippines. Presumably, these large, dark females are part of the reason why confusion exists to this day between A. frenatus and A. melanopus – image by Matt Pedersen

#2. There appears to be one notable variation in A. frenatus – some individuals from Okinawa, Japan, appear to have a delightfully stunning yellow border to all their fins, adding a truly new dimension to this bread & butter species (see example #1, #2, #3, #4, #5, #6). 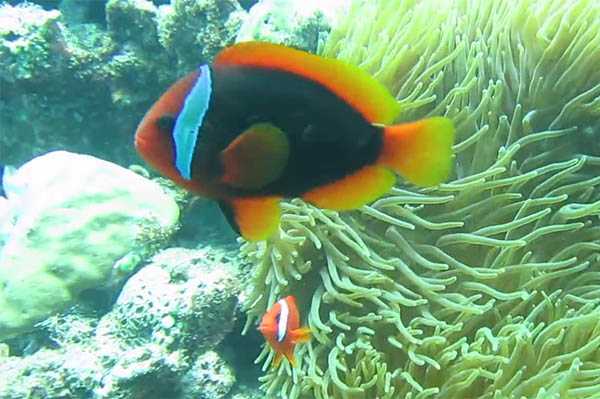 A screenshot of the Okinawa Yellow-finned Tomato Clownfish from the Youtube video below by Evan Natwick filmed at Maeda Point.

Additionally, this video which, with the translation help of Lemon Yi Ti Kai, appears to be from Kenting National Park in Taiwan, also shows a yellow-finned form of A. frenatus. So perhaps this form is not limited strictly to Okinawa, Japan.

Amphrion mccullochi – with such a narrow distribution limited to Lord Howe and reported Norfolk Island, there just isn’t any room for geographic variations to being with! 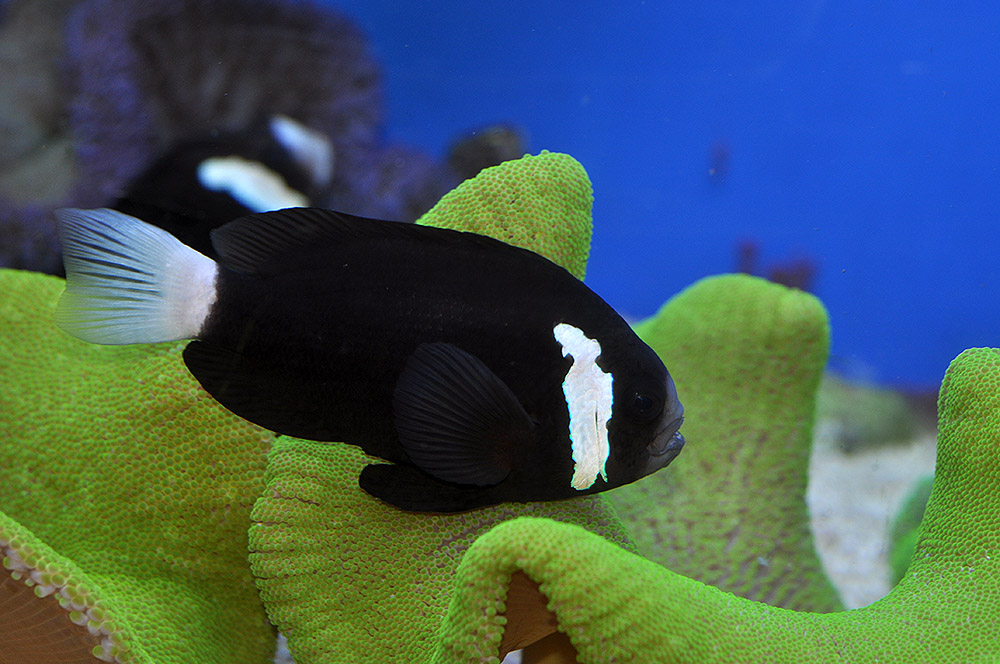 A first generation (F1) captive-bred Mccullochi pair, whose parents were collected in Lorde Howe Island. These offspring were imported from Australia to the US and housed at the LiveAquaria.com facility in Rhinelander, WI, ca. 2011. Just a handful of fish like this are responsible for all the Muccollochi clownfish in the aquarium trade today. Image by Matt Pedersen.

Amphiprion melanopus – The Cinnamon Clown (also known as the “Fire Clown” in some regions, but see A. ephippium above) is the main species showing substantial variations within the Tomato complex. There are at least a few known forms, all tied to geography and a few are in cultivation at this time. 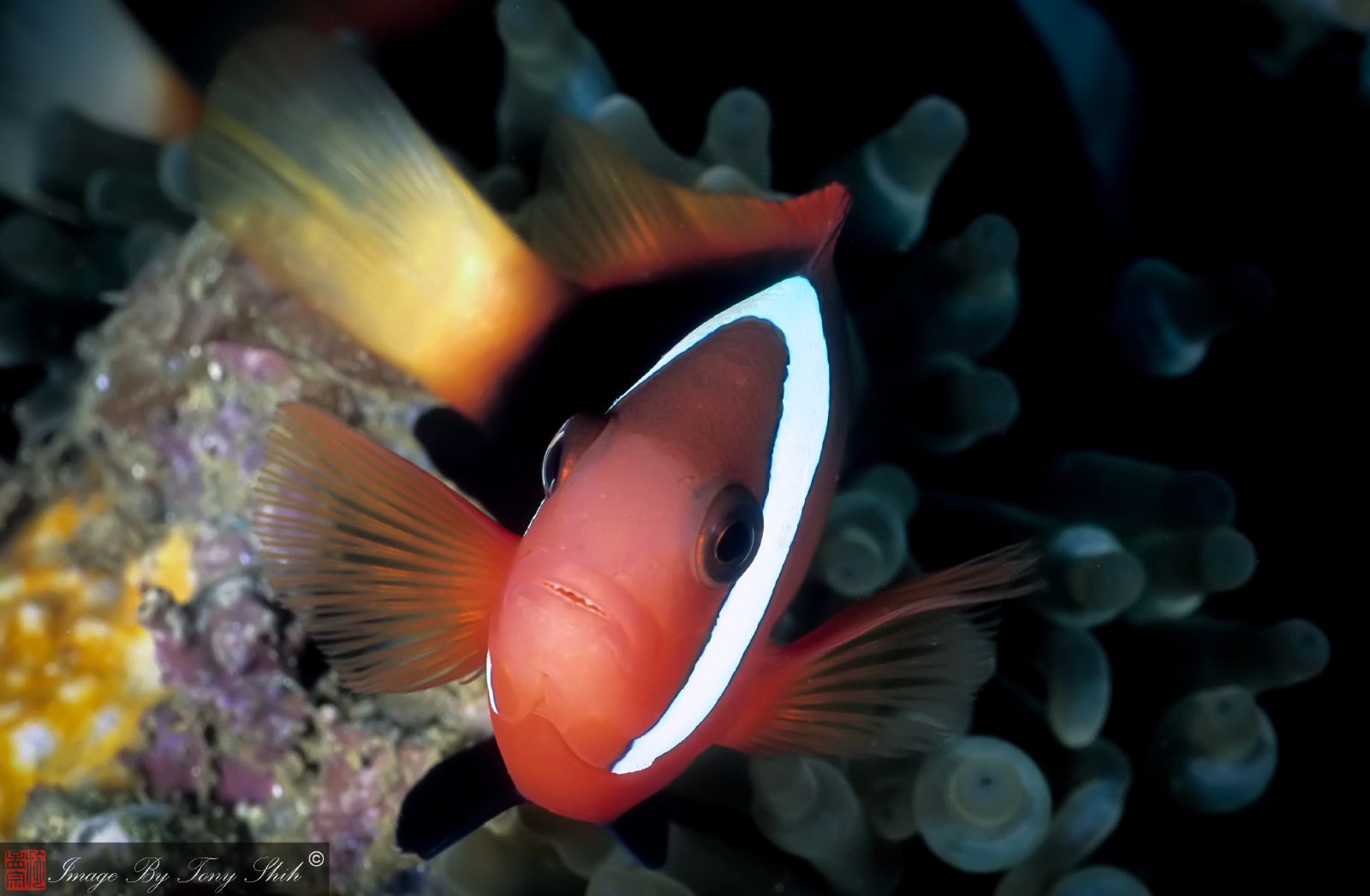 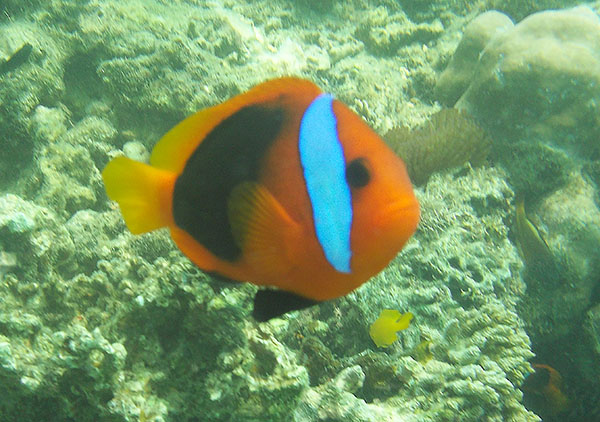 #4. A very similar geographic variant, and arguably one of the most extreme, comes from the neighboring Coral Sea although a precise location is not know to me. This population is polymorphic, containing individuals that lack headstripes, living side-by-side with normally patterned forms (an image of this population in the wild can be seen in Fautin & Allen, page 121). These “Stripeless Cinnamons”, when bred, produce both striped and stripeless offspring according to Matthew Carberry of Sustainable Aquatics – this is truly a remarkable variation of A. melanopus that deserves wider understanding and appreciation. 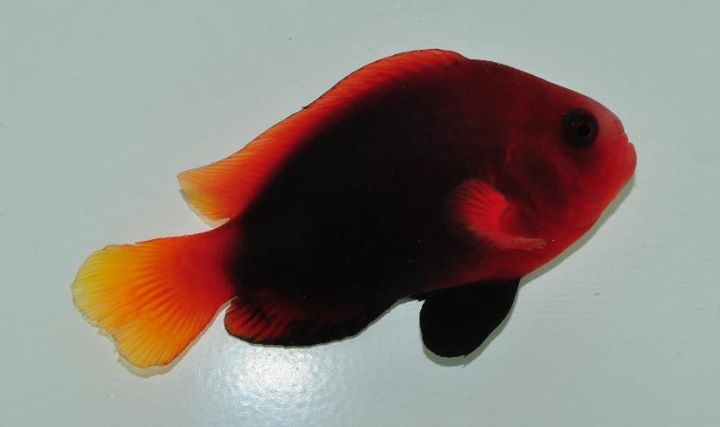 The “Stripeless” Cinnamon Clownfish, this one shown by Sustainable Aquatics, is one of the most unusual clownfish variants that stand out in my mind.

Amphiprion rubrocinctus – coming from the relatively geographically-isolated northwestern coast of Australia, Rubrocinctus Clownfish appear remarkably similar to the Tomato Clownfish upon close inspection. One of the cited distinctions between the species is supposedly that the Tomato, A. frenatus, has a headstripe that is normally bordered in black, whereas A. rubrocinctus lacks this subtle difference. In observing photos, it would seem that A. rubrocinctus may be more likely to have black tips on the ends of the spiney portion of the anal fin. Neither of these characteristics are reliable diagnostic traits in my opinion. Additionally, Rubrocinctus males do not appear to be remain “red” like A. frenatus males; both sexes appear to darken and turn brown along the flank and back with maturity. It also appears that individuals can lose their headstripes almost completely; one wild photograph shows a fish with nothing more than a red slash on the head of an otherwise dark-bodied fish.

Pragmatically, the only real way to know that you have the true Australian Amphiprion rubrocintus is to know exactly where the fish was collected from, brought to you by a source you can completely trust. Here in the US, after exhaustive research and investigation, I am firmly convinced that no one has the true Amphiprion rubrocinctus in their possession, and it is certainly not being propagated in my opinion. I welcome any US-based aquarists with the known, true fish, to approach me! 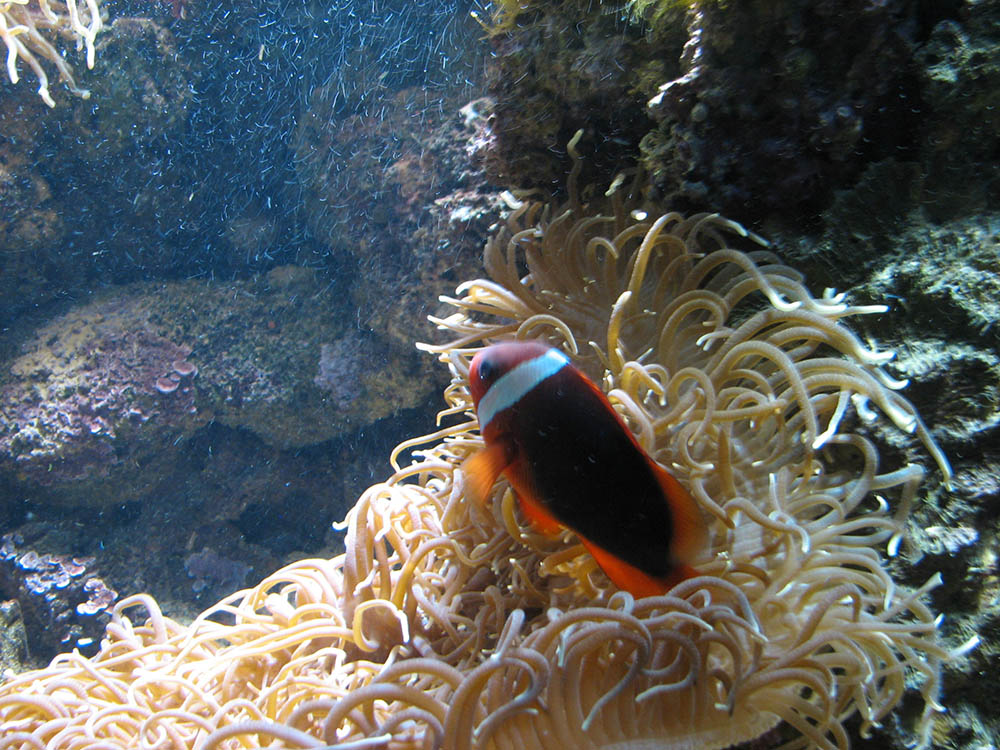 Literally the only fully available creative commons image of a LIKELY A. rubrocinctus I could find, shown here in an aquarium at Litchfield National Park in Australia, photographed by Flickr user vaca0627 | CC BY 2.0

Continue to the next segment; Geographic Variants of Clownfishes in the Clarkii Species Complex