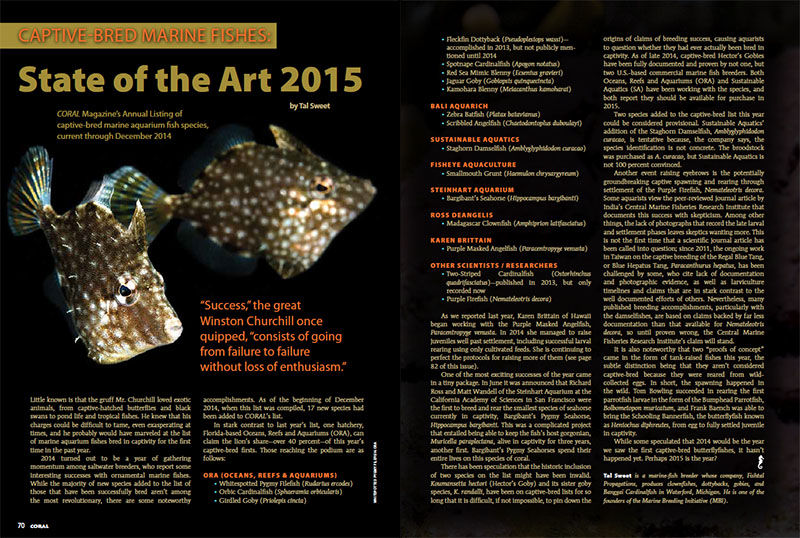 “Success,” the great Winston Churchill once quipped, “consists of going from failure to failure without loss of enthusiasm.”

Little known is that the gruff Mr. Churchill loved exotic animals, from captive-hatched butterflies and black swans to pond life and tropical fishes. He knew that his charges could be difficult to tame, even exasperating at times, and he probably would have marveled at the list of marine aquarium fishes bred in captivity for the first time in the past year.

2014 turned out to be a year of gathering momentum among saltwater breeders, who report some interesting successes with ornamental marine fishes. While the majority of new species added to the list of those that have been successfully bred aren’t among the most revolutionary, there are some noteworthy accomplishments. As of the beginning of December 2014, when this list was compiled, 17 new species had been added to CORAL’s list.

In stark contrast to last year’s list, one hatchery, Florida-based Oceans, Reefs and Aquariums (ORA), can claim the lion’s share—over 40 percent—of this year’s captive-bred firsts. Those reaching the podium are as follows:

As we reported last year, Karen Brittain of Hawaii began working with the Purple Masked Angelfish, Paracentropyge venusta. In 2014 she managed to raise juveniles well past settlement, including successful larval rearing using only cultivated feeds. She is continuing to perfect the protocols for raising more of them (see page 82 of this issue).

One of the most exciting successes of the year came in a tiny package. In June it was announced that Richard Ross and Matt Wandell of the Steinhart Aquarium at the California Academy of Sciences in San Francisco were the first to breed and rear the smallest species of seahorse currently in captivity, Bargibant’s Pygmy Seahorse, Hippocampus bargibanti. This was a complicated project that entailed being able to keep the fish’s host gorgonian, Muricella paraplectana, alive in captivity for three years, another first. Bargibant’s Pygmy Seahorses spend their entire lives on this species of coral.

There has been speculation that the historic inclusion of two species on the list might have been invalid. Koumansetta hectori (Hector’s Goby) and its sister goby species, K. randalli, have been on captive-bred lists for so long that it is difficult, if not impossible, to pin down the origins of claims of breeding success, causing aquarists to question whether they had ever actually been bred in captivity. As of late 2014, captive-bred Hector’s Gobies have been fully documented and proven by not one, but two U.S.-based commercial marine fish breeders. Both Oceans, Reefs and Aquariums (ORA) and Sustainable Aquatics (SA) have been working with the species, and both report they should be available for purchase in 2015.

Two species added to the captive-bred list this year could be considered provisional. Sustainable Aquatics’ addition of the Staghorn Damselfish, Amblyglyphidodon curacao, is tentative because, the company says, the species identification is not concrete. The broodstock was purchased as A. curacao, but Sustainable Aquatics is not 100 percent convinced.

Another event raising eyebrows is the potentially groundbreaking captive spawning and rearing through settlement of the Purple Firefish, Nemateleotris decora. Some aquarists view the peer-reviewed journal article by India’s Central Marine Fisheries Research Institute that documents this success with skepticism. Among other things, the lack of photographs that record the late larval and settlement phases leaves skeptics wanting more.

This is not the first time that a scientific journal article has been called into question; since 2011, the ongoing work in Taiwan on the captive breeding of the Regal Blue Tang, or Blue Hepatus Tang, Paracanthurus hepatus, has been challenged by some, who cite lack of documentation and photographic evidence, as well as larviculture timelines and claims that are in stark contrast to the well documented efforts of others. Nevertheless, many published breeding accomplishments, particularly with the damselfishes, are based on claims backed by far less documentation than that available for Nemateleotris decora, so until proven wrong, the Central Marine Fisheries Research Institute’s claim will stand.

It is also noteworthy that two “proofs of concept” came in the form of tank-raised fishes this year, the subtle distinction being that they aren’t considered captive-bred because they were reared from wild-collected eggs. In short, the spawning happened in the wild. Tom Bowling succeeded in rearing the first parrotfish larvae in the form of the Bumphead Parrotfish, Bolbometopon muricatum, and Frank Baench was able to bring the Schooling Bannerfish, the butterflyfish known as Heniochus diphreutes, from egg to fully settled juvenile in captivity. While some speculated that 2014 would be the year we saw the first captive-bred butterflyfishes, it hasn’t happened yet. Perhaps 2015 is the year?

Orange  Common Name = new to the list this year.

Green = Commonly Available. Easy to find as a captive-bred fish, often from more than one source, throughout 2014 and/or into 2015.

Blue – Moderate to Low. Might have taken some searching, and availability may have been limited, but was reasonably obtainable as a captive-bred fish in 2014.

Purple = Scarce. Generally only one source or breeder is known, and potentially only a handful of specimens may have been available. You may have “had to know someone” or even know the breeder directly in order to obtain them as captive-bred fish during 2014.

Black = None. The authors and consulted parties were unaware of any retail availability of this species from a captive-bred source during 2014.