CORAL BONUS: It Was Always the Red Clownfish from Fiji: Amphiprion barberi (Part 3) 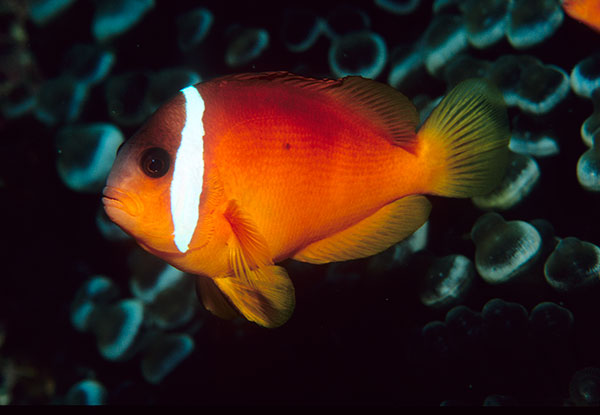 The Red Clownfish from Fiji (and Tonga, and Samoa) has gone by three different scientific names in 42 years. Image by Scott Michael

It Was Always the Red Clownfish from Fiji (and Tonga, and Samoa): Amphiprion barberi

This is the story of an orange-red clownfish that first entered the trade as Amphiprion rubrocinctus. It was worth noting that A. rubrocinctus was known from the northwestern coast of Australia, but back in 1972, noted anemonefish expert Dr. Gerald R. Allen had believed that a Red Clownfish from the Tomato Complex, found in Fiji, fit the mold for A. rubrocinctus.

Commercial breeders picked up the species and started breeding, and selling, A. rubrocinctus, at least 16 years ago. ORA (Oceans Reefs And Aquariums) has the longest history working with the species, and their history, as documented through the internet archive, makes a compelling tale. 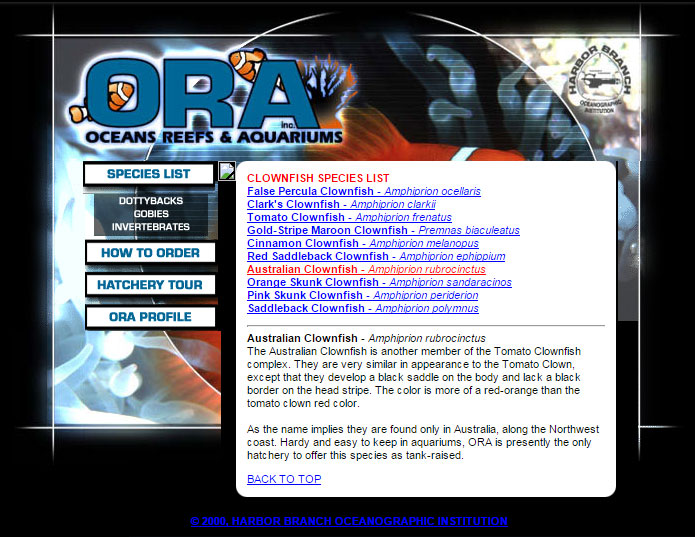 The earliest accessible historical reference to “A. rubrocinctus” at ORA, June 2, 2001, composite recreation, via materials accessed via Archive.org

By 1980, Allen had already recognized that these Fijian fish were not A. rubrocinctus, and suggested that this was an all-red color variant of A. melanopus. A few books get published calling it A. melanopus, but importers and breeders were still offering this fish as A. rubrocinctus, including ORA, who didn’t have the fish in active production in 2005, but re-listed it for sale in limited production by October, 2007. 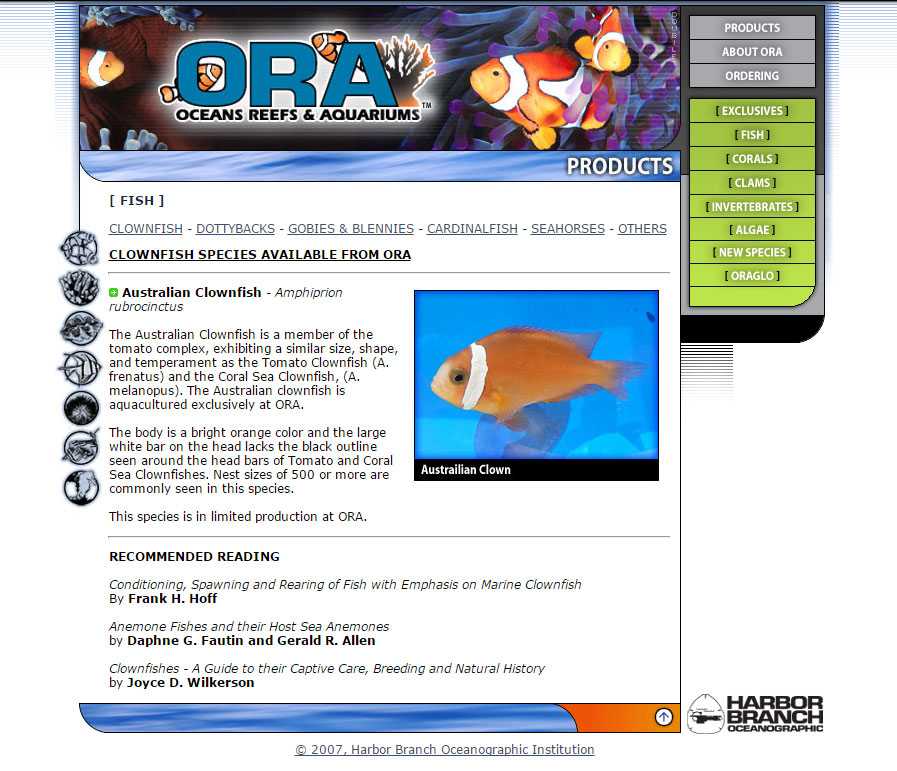 “A. rubrocinctus” goes back into limited production around October, 2007, composite recreation, via materials accessed via Archive.org

It wasn’t until 2008 that Allen (along with two additional authors) once again changed their minds, and said no, this Red Clownfish we see in Fiji (and Tonga, and Samoa) is not in fact A. melanopus after all.  It’s a new species; we’ll call it A. barberi.  Yet, at that point in time, it was still being produced, and sold by commercial breeders including ORA, as A. rubrocinctus. 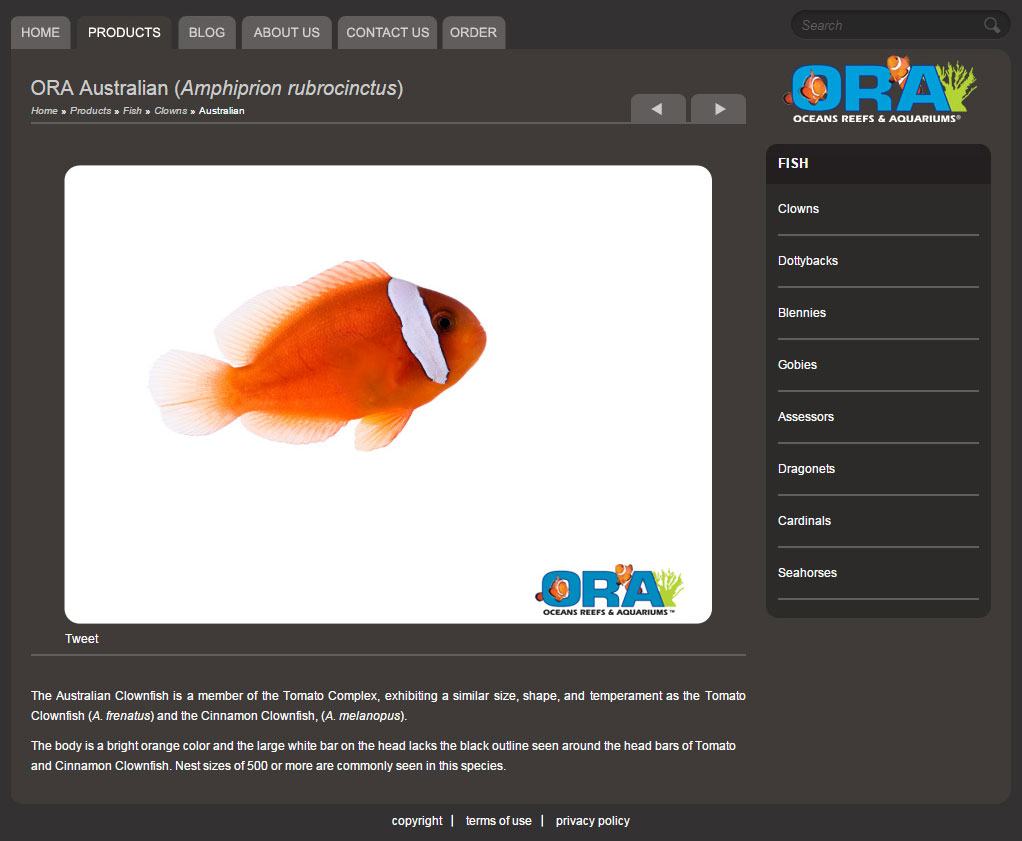 As late as September 3rd, 2012, ORA still listed and offered “A. rubrocinctus”, captured screenshot via Archive.org

It continued that way for 5 more years before ORA had their own stock reevaluated and determined that yes, in fact, their fish were A. barberi, as announced on April 3rd, 2013.

To date, ORA is the only company to have reexamined specific stocks of “A. rubrocinctus” to reconfirm them as verifiable A. barberi. Typically, when these sort of name changes and ID mishaps occur in the freshwater hobby or trade, breeders simply opt to start over (with new broodstock vs. continuing to propagate suspect lines)! 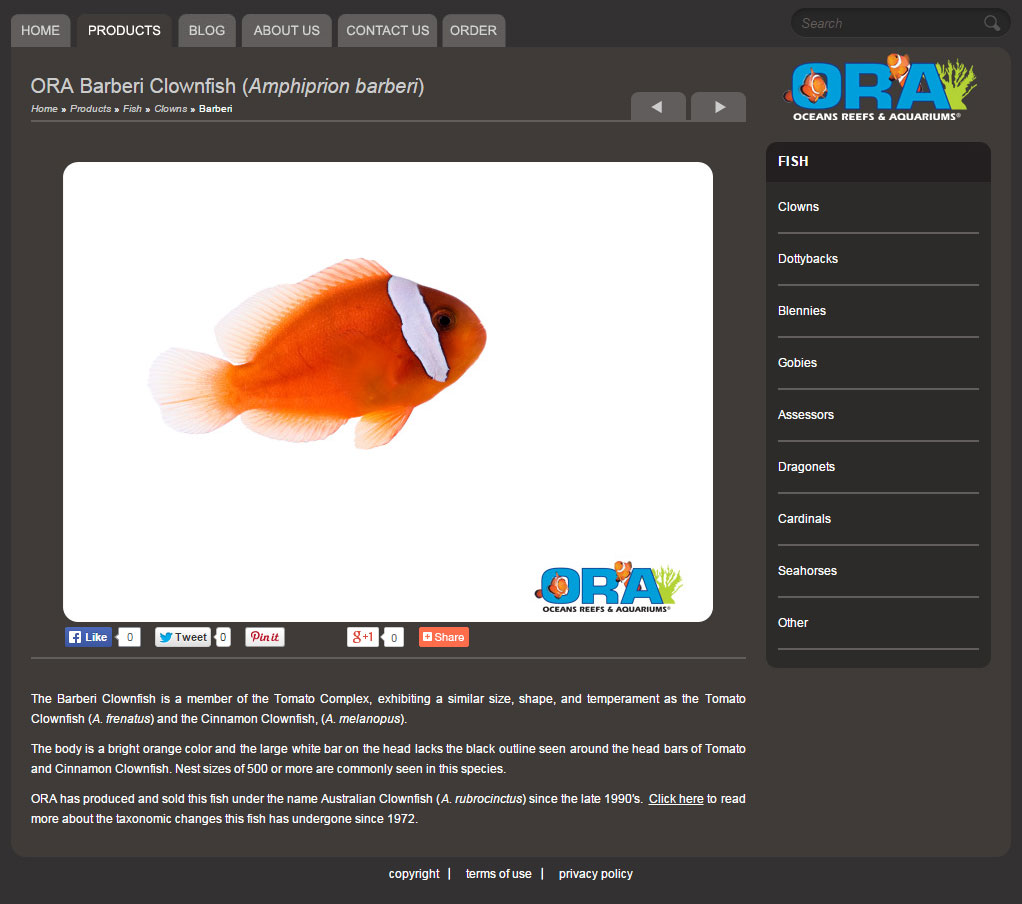 ORA’s current listing for A. barberi as of November, 2014

Breeders should take note of the lengths ORA went through to reevaluate their own broodstock. ORA was forced to dig deep, given that provenance data on fish they’d have for over a decade wasn’t exactly easy to track down.

Like ORA, breeders working with these Fijian fish in the past were probably thinking of them as either A. rubrocintus if coming from captive-bred sources, as well as any  Fijian, Tongan or Samoan exports coming in under the entrenched trade name of Rubrocinctus. Savvy breeders getting wild stock from a known location (Fiji) back in the day *might* have know this all-red fish was considered a variation of A. melanopus, and not the name the trade was applying to it.

Either way, breeders working with these fish, under these names, could have potentially hybridized A. barberi with either with the true  A. rubrocinctus (if any real A. rubrocinctus ever made it to the trade) or more classic forms of the Cinnamon Clownfish, A. melanopus. Given our historical past loathing of any non-natural Clownfish, so much so that a misbarred fish was an automatic cull and aberrant fish were left in the wild when found, the taxonomic understanding of the day would have treated A. barberi as either A. rubrocinctus or A. melanopus, depending largely on “who got the memo from 1980”! In the minds of the breeders of the day such mismatched and currently known interspecific hybrid pairings would have been completely acceptable.

This of course means that, from a species purity standpoint, any long standing lines of “Rubrocinctus” could in fact be A. barberi, A. rubrocinctus, or hybrids between the two, or even hybrids with A. melanopus. Who knows how pure a long standing line of Cinnamon clownfish might be? In a message I’ll come back to time and again throughout this series, breeding with consideration for maintaining pure biogeographic provenance, and not taxonomy, would have created more trustworthy older captive lines.

To this day, I am suspect of clownfishes sold as “Rubrocinctus”; short of a import coming in from western Australia via a trusted source, I’d have my doubts about the voracity and purity of a fish with the Rubrocinctus name. Producers are recognizing the new species, A. barberi, and they are plentiful as wild caught imports, so we have this species covered. But if we want to have the “real” or “true” A. rubrocinctus in the hobby (it’s an interesting fish) we’re going to need to start over with fresh broodstock from the wild, which isn’t easy given the relative scarcity of imports from western Australia.

The moral of the story is simply this – had ORA known that their solid red Tomato-Complex clowns had come from Fiji from the start, then the scientific name, the “taxonomically valid name”, wouldn’t have much mattered. It certainly never mattered to the fish living on the reefs in Fiji; they have been, and will continue to be, the Red Clownfish from Fiji (and Tonga, and Samoa).

Continue to the next section – “Clownfish Species Hiding in Plain Sight?”