CORAL Excerpt – Clownfish Diversity: A Treasure and A Challenge (Part 1) 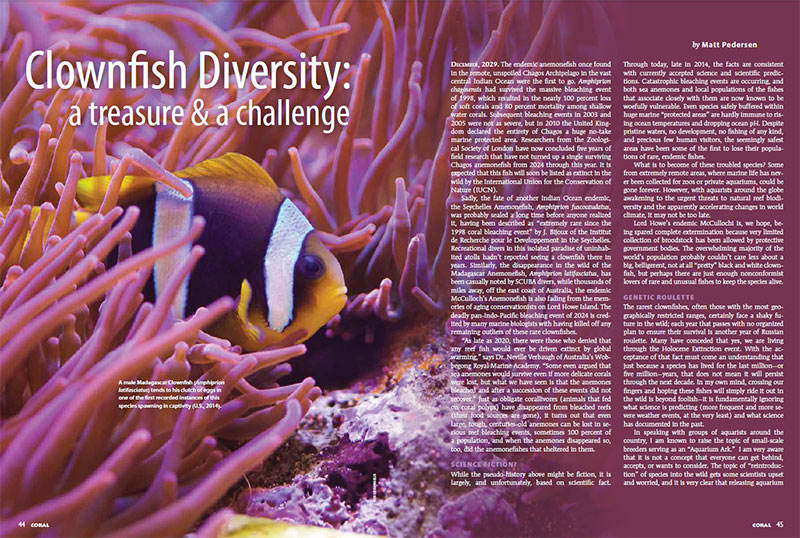 The following excerpt is a selection from “Clownfish Diversity: A Treasure and A Challenge” by Matt Pedersen, published November/December 2014 issue of CORAL Magazine, with expanded digital bonus content online at Reef2Rainforest.com

Clownfish Diversity: A Treasure & A Challenge

The endemic anemonefish once found in the remote, unspoiled Chagos Archipelago in the vast central Indian Ocean were the first to go. Amphiprion chagosensis had survived the massive bleaching event of 1998, which resulted in the nearly 100 percent loss of soft corals and 80 percent mortality among shallow water corals. Subsequent bleaching events in 2003 and 2005 were not as severe, but in 2010 the United Kingdom declared the entirety of Chagos a huge no-take marine protected area. Researchers from the Zoological Society of London have now concluded five years of field research that have not turned up a single surviving Chagos anemonefish from 2024 through this year. It is expected that this fish will soon be listed as extinct in the wild by the International Union for the Conservation of Nature (IUCN).

Sadly, the fate of another Indian Ocean endemic, the Seychelles Amenonefish, Amphiprion fuscocaudatus, was probably sealed a long time before anyone realized it, having been described as “extremely rare since the 1998 coral bleaching event” by J. Bijoux of the Institut de Recherche pour le Developpement in the Seychelles. Recreational divers in this isolated paradise of uninhabited atolls hadn’t reported seeing a clownfish there in years. Similarly, the disappearance in the wild of the Madagascar Anemonefish, Amphiprion latifasciatus, has been casually noted by SCUBA divers, while thousands of miles away, off the east coast of Australia, the endemic McCulloch’s Anemonefish is also fading from the memories of aging conservationists on Lord Howe Island. The deadly pan-Indo-Pacific bleaching event of 2024 is credited by many marine biologists with having killed off any remaining outliers of these rare clownfishes.

“As late as 2020, there were those who denied that any reef fish would ever be driven extinct by global warming,” says Dr. Neville Verbaugh of Australia’s Wobbegong Royal Marine Academy. “Some even argued that sea anemones would survive even if more delicate corals were lost, but what we have seen is that the anemones bleached and after a succession of these events did not recover.” Just as obligate corallivores (animals that fed on coral polyps) have disappeared from bleached reefs (their food sources are gone), it turns out that even large, tough, centuries-old anemones can be lost in serious reef bleaching events, sometimes 100 percent of a population, and when the anemones disappeared so, too, did the anemonefishes that sheltered in them.

While the pseudo-history above might be fiction, it is largely, and unfortunately, based on scientific fact. Through today, late in 2014, the facts are consistent with currently accepted science and scientific predictions. Catastrophic bleaching events are occurring, and both sea anemones and local populations of the fishes that associate closely with them are now known to be woefully vulnerable. Even species safely buffered within huge marine “protected areas” are hardly immune to rising ocean temperatures and dropping ocean pH. Despite pristine waters, no development, no fishing of any kind, and precious few human visitors, the seemingly safest areas could be some of the first to lose their populations of rare, endemic fishes.

What is to become of these troubled species? Some from extremely remote areas, where marine life has never been collected for zoos or private aquariums, could be gone forever. However, with aquarists around the globe awakening to the urgent threats to natural reef biodiversity and the apparently accelerating changes in world climate, it may not be too late.

Lord Howe’s endemic McCullochi is, we hope, being spared complete extermination because very limited collection of broodstock has been allowed by protective government bodies. The overwhelming majority of the world’s population probably couldn’t care less about a big, belligerent, not at all “pretty” black and white clownfish, but perhaps there are just enough nonconformist lovers of rare and unusual fishes to keep the species alive.

The rarest clownfishes, often those with the most geographically restricted ranges, certainly face a shaky future in the wild; each year that passes with no organized plan to ensure their survival is another year of Russian roulette. Many have conceded that yes, we are living through the Holocene Extinction event. With the acceptance of that fact must come an understanding that just because a species has lived for the last million—or five million—years, that does not mean it will persist through the next decade. In my own mind, crossing our fingers and hoping these fishes will simply ride it out in the wild is beyond foolish—it is fundamentally ignoring what science is predicting (more frequent and more severe weather events, at the very least) and what science has documented in the past.

In speaking with groups of aquarists around the country, I am known to raise the topic of small-scale breeders serving as an “Aquarium Ark.” I am very aware that it is not a concept that everyone can get behind, accepts, or wants to consider. The topic of “reintroduction” of species into the wild gets some scientists upset and worried, and it is very clear that releasing aquarium species into nature is not for amateurs—it would have to be done by trained biologists with great care. However, if the day ever comes when humans do want to restore a fish species to a wild area where it has become locally extinct, we are not going to be able to do it if no one has bothered to preserve the species in the first place. This debate can, and should, continue elsewhere, but for the aquarist in search of a fish worthy of his or her special attention, a fish rare in the trade and uncommon in nature, I believe the subfamily Amphiprioninae (clownfishes) offers many species, subspecies, and geographic variants to consider.

Aquarists who specialize in keeping and breeding pure strains of wild-type clownfishes, either classic examples of the species or geographic or morphological variants, are doing a potentially valuable service to the future of our hobby—and possibly preserving the genetic heritage of the fishes themselves.

In a CORAL anemonefish feature back in 2005, Frank Schniedewind said, “There is very little variation between the species in each subgenus and species complex…The decision whether to classify a certain animal as a species, subspecies, or color variant is often highly subjective on the part of the scientist.” I am here to disagree.

It turns out that clownfishes, with their shorter larval durations, have evolved a number of geographic variations within what we currently consider to be a single species. This is perhaps atypical for most other marine fishes that are pelagic spawners with long larval phases.

It is because of these geographic variations, and the fluidity of taxonomy, that obtaining fishes with known provenance is of the highest importance for anyone planning on breeding clownfishes. In other words, know where your fishes come from and keep a record of it. If you know you have a Whitetailed Cinnamon Clownfish from the Solomon Islands, it won’t matter if we call it Amphiprion melanopus today and A. frenatus tomorrow, because regardless of the name, that unique form is quite possibly found nowhere else.

In an effort to bring some order to the chaos of so many clownfish variants in nature, I hope to see responsible publishers work toward including both the species name and the known geographic location with any clownfish image published. It is only through ongoing exposure and education that we’ll come to appreciate the hidden gems when they appear.

Continue to the next section – “Anemonefishes and Their 2014 Taxonomic State”

Taxonomic, Spatial and Temporal Patterns of Bleaching in Anemones Inhabited by Anemonefishes, by Jean-Paul A. Hobbs et. al. – http://www.plosone.org/article/info:doi/10.1371/journal.pone.0070966 – Full Article as PDF