The National Oceanic and Atmospheric Administration‘s (NOAA) National Marine Fisheries Service (NMFS) found that the orange clownfish (also commonly called the percula clownfish and bearing the scientific name Amphiprion percula) may warrant protection under the Endangered Species Act (ESA). NMFS cited major anthropogenic stressors such as global climate change and ocean acidification as the primary basis for the finding. The action is the result of a September 2012 petition from the Centers for Biological Diversity (CBD) to list eight species of pomacentrid reef fishes under the ESA. NMFS will now undertake a status review of A. percula and will then present it’s findings based on the scientific literature and public comment. 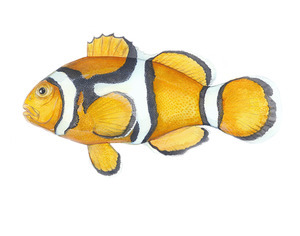 As with other NMFS findings regarding listings of species under the ESA, the so-called “substantial finding” is, in the words of a NMFS biologist, “a very low bar.” What NMFS is saying at this point is that the petition itself presents substantial information indicating that ESA listing may be warranted. Up until this point in the process, NMFS does not seek information from outside sources but instead relies on what the petitioner included, as well as any in-house documents already in NMFS files. An NMFS source explains that this procedure is meant to put the onus on the petitioner and help prevent frivolous petitions.

As such, NMFS cautions that a positive 90-day finding such as this one is not a strong indication that a species is likely to become listed. Instead, it simply indicates the petitioner included substantial enough information in the petition for the Service to determine they need to take a closer look. As Therese Conant, a biologist for NMFS Endangered Species Conservation Division, said in an interview I conducted for an article regarding another species currently in status review (Banggai cardinalfsh), “We just look at the information and see if it’s sufficient enough that it would lead a reasonable person to believe that further review of the species is needed.”

The CBD petition states that the primary threats to the petitioned species include loss of coral reef habitat due to climate change, overharvest for the marine aquarium fish trade, inadequate regulatory mechanisms, and direct harm to essential biological functions from ocean acidification and ocean warming. Regarding the aquarium trade threat, the petition states: “United States and international regulations are inadequate to protect the petitioned pomacentrids from threats from the global marine aquarium trade.” NMFS found that the petition “does not provide substantial information to suggest existing regulatory mechanisms are inadequate and may be causing an extinction risk” for any of the Indo-Pacific species except Amphiprion percula. Regarding A. percula, NMFS found the following:

[W]e are unable to estimate the magnitude of impact that the marine aquarium trade may be having on A. percula’s population, because we have inadequate information to estimate population size for this species.

In short, NMFS feels a reasonable person would agree that more data is necessary before making a decision, which is not surprising given extant data regarding the trade in the species.

While species being considered for ESA listing is generally well-received news by the general public, groups directly affected by a listing often represent a vocal minority in opposition to such listings. In the case of A. percula, the marine aquarium trade is generally opposed to listing the species because it contends that the species’ population levels in the wild are “in good shape” and that “most of the aquarium clownfish are now captive bred.” Neither claim by aquarium trade advocates can be confirmed by the extant data, but neither can the claim of “overharvest” levied by the petitioner be confirmed. In other words, it’s the same old lament: more data are needed.

The aquarium trade has vowed to fight popular aquarium species being listed under the ESA. That fight is currently being led by the Marine Ornamental Defense Committee of the Pet Industry Joint Advisory Council (PIJAC). The impending fight between PIJAC and NMFS seems a bit strange to some, however, because, while PIJAC is “fight[ing] for the long-term viability of having fish as pets,” NMFS is considering listing many of these species primarily for reasons having little to do with the aquarium trade.

As NMFS stated in their 90-day finding, “A. percula may be warranted for listing due to species specific threats identified under listing Factor A.” Factor A is defined as “Present or Threatened Destruction, Modification, or Curtailment of Habitat or Range,” and really concerns “bleaching and subsequent loss of anemone habitat resulting from ocean warming.” The overharvesting claim is included as Factor B, and to that point, NMFS says they simply don’t have the data to assess the claim of overharvest at this point. “In the absence of information on abundance,” NMFS says, “we are unable to determine how the harvest of up to 200,000 individuals annually may impact the status of A. percula.”

While large anthropogenic stressors having little if anything to do with the aquarium trade are the primary drivers behind this proposed listing, it should be clear NMFS does not have a wholly positive impression of the aquarium trade. For example, in the recently released final rule document concerning the newly listed coral species, NMFS states: “As it currently stands, the amount of unreported, illegal, and unregulated collection, combined with the large amount of biomass loss along the supply chain raises serious questions as to the sustainability of the ornamental trade.” In the current finding regarding A. percula, NMFS states they will be “seeking additional information on all threats to A. percula [emphasis mine] and conducting a full status review for this species.”

Given NMFS opinions regarding the marine aquarium trade, and knowing that “all threats” are currently on the table during the status review, it makes sense why PIJAC is engaged on behalf of the hobby. Rather than setting this up as a fight of aquarium trade versus NMFS, however, perhaps PIJAC could be even more effective by playing an instrumental role in:
1) publicizing the facts (and making sure the data is heard, as it did in the case of the coral listings) concerning NMFS’s action and encouraging public comment as part of the status review process,
2) taking concrete steps toward comprehensive reform of the trade so that the trade is not as open to allegations regarding lack of transparency, lack of regulation and illegality , and
3) ensuring that the aquarium hobby and trade are increasingly a measurable part of a broader solution to reef conservation. Rather than setting this up as an Us versus Them battle, perhaps PIJAC could take a leadership role in promoting a constructive, fact-based dialog that will lead to a truly sustainable and robust marine aquarium trade that will be seen by government agencies and environmental groups alike as a partner in reef conservation.