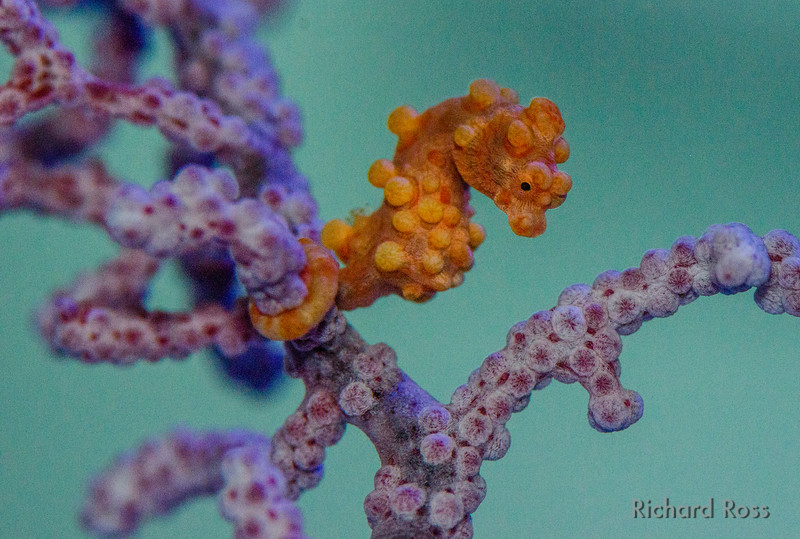 An adult Bargibant’s Pygmy Seahorse, behind the scenes at the Steinhart Aquarium at the California Academy of Sciences – Image courtesy Richard Ross.

Matt Wandell and Richard Ross are two professional aquarists who need no introduction to serious marine aquarium audiences. This dynamic duo of public aquarists has the kind of job most all of us would gladly commit manslaughter to have, working for the Stienhart Aquarium at the California Academy of Sciences. Wandell and Ross get to work on the type of aquarium systems most of us can only dream of and certainly will never afford.  As if that wasn’t enough, they get to galavant around the globe on expeditions looking for new and interesting animals and husbandry challenges that many of us will never have the opportunity to tackle – like keeping and breeding Hippocampus bargibanti, Bargibant’s Pygmy Seahorse. Can you smell, can you taste, the envy? 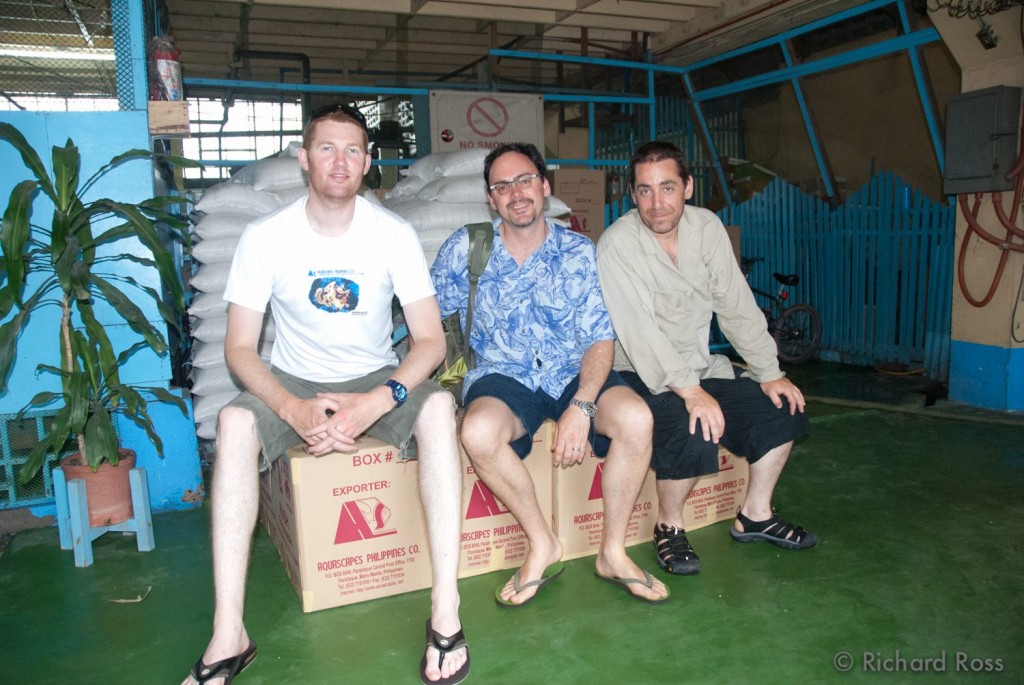 Three of Steinhart’s key players behind this project – (left to right) Matt Wandell, Bart Sheperd, and Richard Ross, photographed in Manilla in 2011.

The news that the Steinhart Aquarium has successfully bred and reared the smallest species of seahorse currently in captivity was released today in an online article by Nick Stockton for Wired Magazine. Stockton’s article tells the three-year back story behind this project (it’s quite humorous, we encourage you to read it), culminating in a world-wide first.

Apparently Wandell and Ross first had to prove their convince the Steinhart’s director, Bart Sheperd, that the ambitious project was feasible: before pushing forward into breeding attempts, they needed to successfully keep the seahorse’s host, a gorgonian species, Muricella paraplectana, that has proven difficult to sustain in captivity.

This sea fan is one of two known hosts for Bargibant’s Seahorse; wild photos and Fishbase records also document Muricella plectana as a host for the species. Interestingly, Fishbase suggests that “two color morphs [of H. bargibanti] are known: (a) pale grey or purple with pink or red tubercles (found on gorgonian coral Muricella plectana) and (b) yellow with orange tubercles (found on gorgonian coral Muricella paraplectana).”

Needless to say, Wandell and Ross succeeded with the gorgonian care and held Sheperd to his promise. During the 2014 Philippines Biodiversity Expedition, Wandell collected a single pair of H. bargibanti, on the night of May 18th, 2014, which arrived at the Steinhart Aquarium only 2 days later on May 20th. When asked why biologists only collected a single male/female pair, Ross replied, “We want to have the least impact on the natural environment as possible, especially for an experiment…We were thrilled just to have them alive in captivity.”

Ross has been observing these fish like an annoying, micromanaging boss. Such extreme focus has already allows Ross to document behavior including courtship and mating. Check out this newly released footage of the daily, morning bonding ritual that occurs between the pair.

Female in front, male behind from Richard Ross on Vimeo.

Wandell and Ross’s new charges did a whole lot more than just live in captivity, they have already produced 2 broods of captive-bred offspring, with a third birth expected this weekend. Estimates suggest as many as 70 offspring are produced in each breeding cycle. 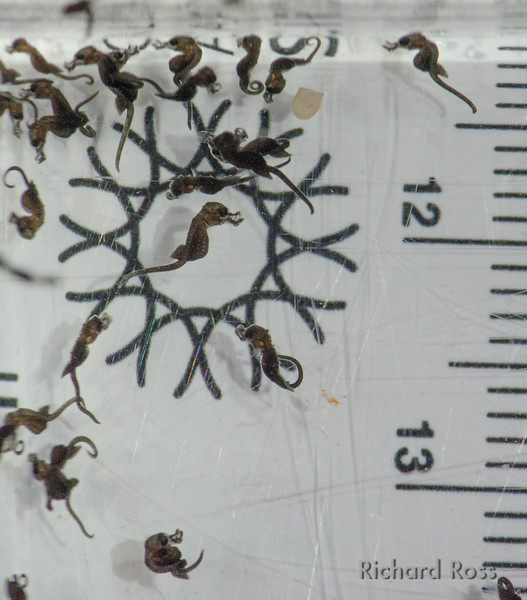 Details on larval rearing are understandably scarce at this time, but what can be revealed is that copepods provided by Algagen played an integral role in nourishing the pelagic offspring. Baby Brine shrimp, aka. Artemia nauplii, were also shown to be used as a larval feed. 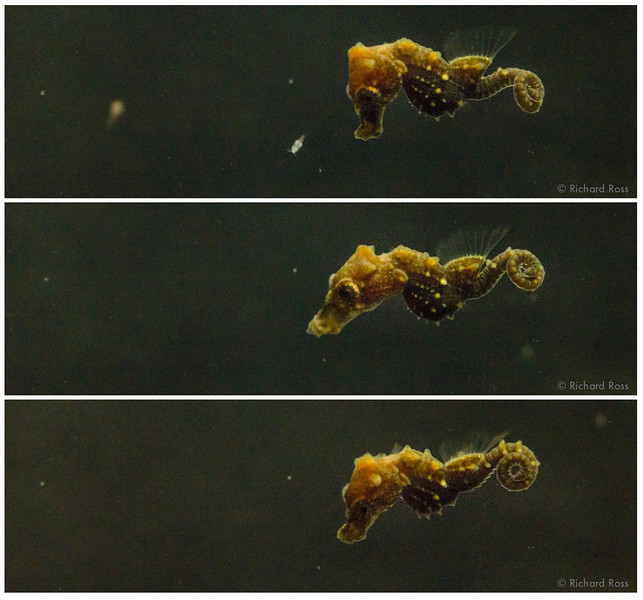 A larval Bargibanti Seahorse, at 6 days post birth, feeding on a copepod.

Yes, while we might have hoped that this species was similar in reproduction to the “breed-like-rabbits” Dwarf Seahorse, Hippocampus zosterae, there are already some noteworthy differences between the two species. H. zosterae are one of the few seahorses known to feature direct-development of their offspring; in seahorse breeder jargon, they “hitch” immediately upon birth. Wandell and Ross  shared that the offspring of H. bargibanti don’t settle and assume a benthic lifestyle (start hitching) until 18 days post release. 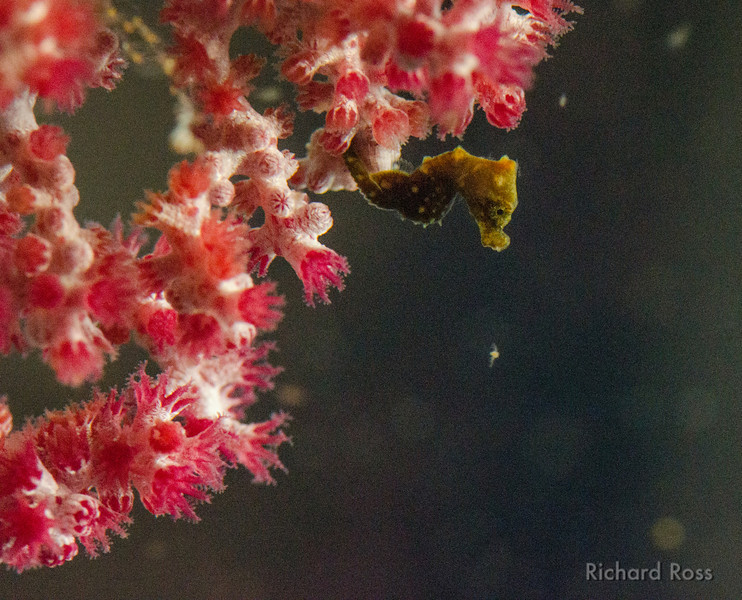 One of the big questions, of course, is whether the color morphs are genetic or caused environmentally (One theory: a seahorse doesn’t know which gorgonian it’s going to settle out onto, so perhaps it changes post-settlement to match its host’s coloration). Perhaps Wandell and Ross will be doing more experimentation that could reveal an answer to this very intriguing question.

For those aquarists who’ve been pining for H. bargibanti, sadly this news doesn’t translate into instant availability for this species within the aquarium trade. We’ve followed up with another article that investigates exactly why you haven’t seen this pygmy seahorse available to date, and why you probably won’t see them anytime soon.

Little else has been written yet about the husbandry methods and breeding protocols for the species at this time. We look forward to this information being made available as this project progresses. CORAL Magazine will be publishing more about this, as the details of the story are revealed by Wandell and Ross. Our hearty congratulations to the team at Steinhart for breaking down yet another captive-breeding barrier.