MACNA ISSUE: Will be included in all attendee Welcome Bags and Kits at the Marine Aquarium Conference of North America, August 29-31, Denver.

Exciting and sure to be one of the most-talked-about issues ever, CORAL Magazine will give readers an inside look at new Florida regulations that are expected to ban the importation of lionfishes in the aquarium trade. 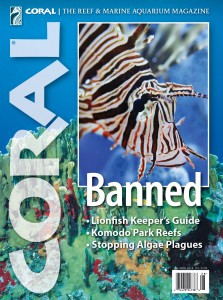 This landmark ruling could have profound effects on the marine aquarium hobby, says CORAL Senior Editor Ret Talbot, who has been following the situation for many months. “A precedent of banning the importation and sale of Indo-Pacific species that might become invasive could ripple through the entire aquarium world,” says one insider who believes the decision is “all politics and bad science.”

Look to CORAL for an investigation of the origins of the disastrous Pterois spp. lionfish invasion that has spread around Florida, the Bahamas and the entire Caribbean. (It’s not as simple as the media has portrayed it.) “There is some good news,” reports Talbot, who describes successful efforts to eradicate the pestilential lionfish in some island areas and urges CORAL readers to be ready to cook and eat lionfish as supplies of the delicious exotic reef fish become more widely available.

• Tunicates: Once thought impossible to keep in captive systems, these beautiful and enigmatic organisms are thriving under the care of KORALLE editor Daniel Knop, who shares the hard-earned secrets of his success.

• Breeding Urchins: Martin Moe, godfather of the modern marine aquarium hobby, is still very much a pioneer, and in an exclusive report he documents an amazing “first”—spawning and rearing the West Indian Sea Egg, Tripneustes ventricosus.

• Smarter Cleanup Crews: Dr. Ron Shimek offers a critical look at the myriad snails, worms, echinoderms, and crustaceans offered to aquarists as living maintenance helpers. Some are winners and …. some have no place in your aquarium.

• And much more: Werner Fiedler takes the reader underwater on the reefs of the Komodo National Park, land of dragons and a fabled destination for serious divers;

DEADLINE for materials to be included in this issue: June 19th.  The issue will reach homes and stores in the first week July, 2014.