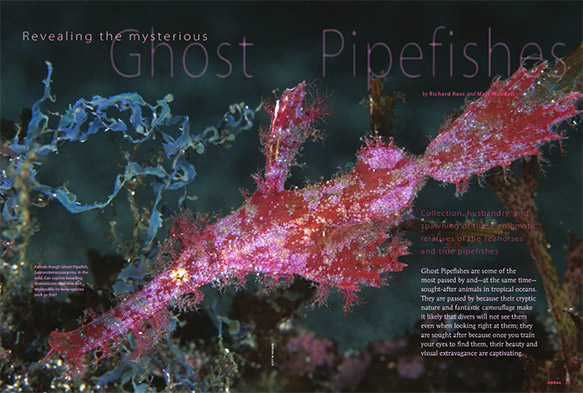 The following excerpt is a selection from “Revealing the Mysterious Ghost Pipefishes” by Richard Ross and Matt Wandell. Get the full article in the January/February 2013 issue of CORAL Magazine

Revealing the Mysterious Ghost Pipefish: Collection, husbandry, and spawning of these enigmatic relatives of the seahorses and true pipefishes

by Richard Ross and Matt Wandell

Ghost Pipefishes are some of the most passed by and—at the same time— sought-after animals in tropical oceans. They are passed by because their cryptic nature and fantastic camouflage make it likely that divers will not see them even when looking right at them; they are sought after because once you train your eyes to find them, their beauty and visual extravagance are captivating.

The track record of these intriguing and delicate fishes in aquariums has been less than stellar. However, recent advances in the collection, husbandry, and display of “hard to keep” fishes by aquarists the world over (and specifically by our team of biologists at the Steinhart Aquarium in the California Academy of Sciences, San Francisco) may help to make not only the routine keeping, but also the captive breeding of these amazing Ghost Pipefishes a reality… 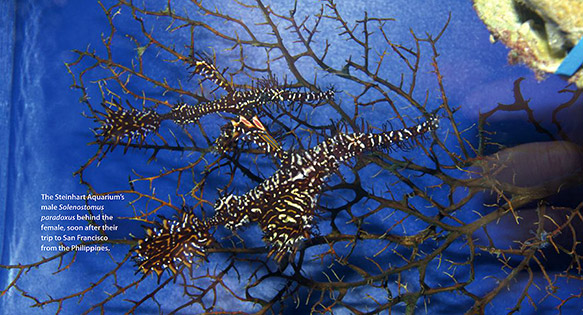 The Steinhart Aquarium’s male Solenostomus paradoxus behind the female, soon after their trip to San Francisco from the Philippines.

The overwhelming consensus among saltwater aquarium keepers is that Ghost Pipefishes are impossible to keep in captivity. Over the years we have developed a healthy sense of skepticism when it comes to the old warnings about animals that should simply be “left in the ocean.” This skepticism stems from an understanding that much of the time these animals are simply not given the specialized care they need to survive. Of course, a shy, difficult-to-feed fish placed in a well-stocked reef aquarium will fail to thrive. However, recent work with the Orangespot or Harlequin Filefish (Oxymonocanthus longistrosis), Purple Queen Anthias (Pseudanthias tuka), octopus, cuttlefish, Acropora, and a whole host of non-photosynthetic corals has shown that, although they require a bit of specialized work, these once seemingly impossible animals can not only live but thrive, and sometimes even reproduce, in captivity. Why should the Ghost Pipefishes be any different? There are three criteria needed for success with “difficult to keep” animals, though satisfying all three can be easier said than done.

Like what you read so far? What are Ross and Wandell’s three criteria for successfully keeping difficult marine aquarium fish and coral? What special shipping methods were vital to increasing success with transporting the delicate Ghost Pipefish from the wild to the aquarium? Do you have what it takes to culture the live foods necessary to keep a fish like this alive? Ross and Wandell show you how, with a primer on small-scale mysis shrimp culture. How successful were the aquarists at the Steinhart Aquarium with breeding Ghost Pipefish?  How long did the babies live and grow? The full article is available in the January/February 2014 issue of CORAL Magazine