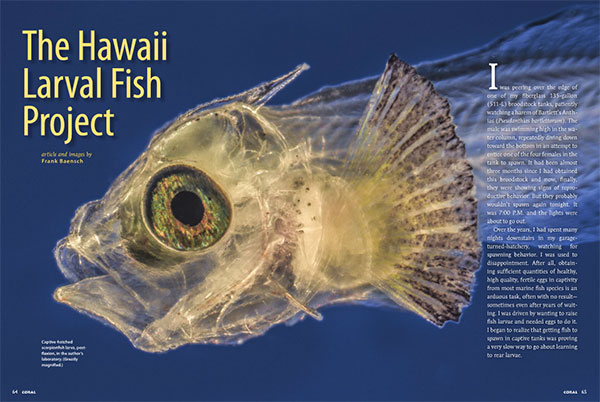 The following excerpt is a selection from “The Hawaii Larval Fish Project” by Frank Baensch. Get it now in the March/April 2014 issue of CORAL Magazine

Almost two years after starting this project my plane touched down at the Honolulu airport. Claudia had spent the past 2 weeks tending to the needs of my ﬁshes. I had been off-island on a boat with no phone contact, and was very eager to ﬁnd out how the little ones were doing—especially Sunny. Like Jack, Sunny was a very special ﬁsh.

As the plane’s wheels hit the tarmac I dialed Claudia’s number. She picked up and after a short greeting I quickly got to the point. “So, how’s Sunny doing?” There was silence on the other end. Then she responded in a triumphant voice: “He’s racing around the tank eating like a champ.” 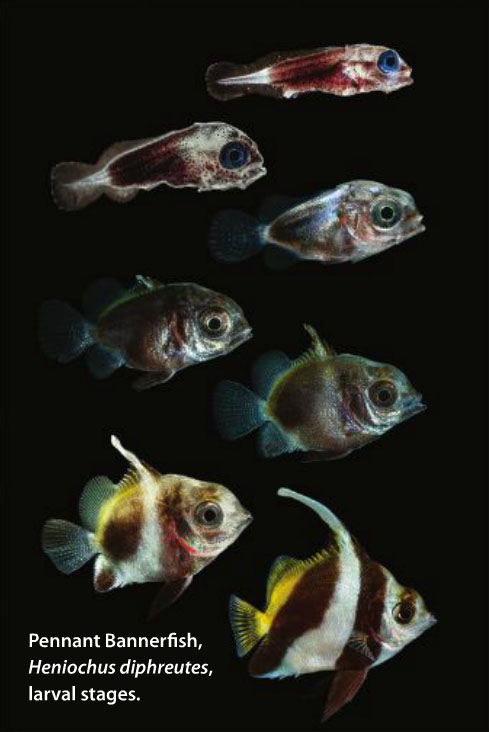 The larval development of the Schooling Bannerfish, Heniochus diphreutes, as documented by Frank Baensch

Sunny was 92 days old. He had been collected in the 60th egg tow of the project and belonged to one of the ﬁsh families I’d been working on since this project started. Normally I would never have left such an important ﬁsh, but the long duration of the larval stage had been a surprise. During my 2-week absence Sunny had started his transition into a juvenile…a juvenile Pennant Bannerﬁsh (Heniochus diphreutes). Sometimes called the False Moorish Idol, this species is actually a butterﬂyﬁsh and a member of the Chaetodontidae.

Butterﬂyﬁsh larvae had been identiﬁed in my rearing tanks many times throughout the project. Fortunately, the larvae were quite easy for me to distinguish early on from other families (within the ﬁrst 10 days after hatching), because their morphology and behavior were similar to those of marine angelﬁsh larvae (Centropyge). Further, the body color of Chaetodon larvae is yellow and that of Heniochus diphreutes larvae is very dark. Unlike the surgeonﬁsh, triggerﬁsh, wrasse, and scorpionﬁsh larvae I’d worked on, which require tiny foods (50–60 microns in size) at ﬁrst feeding, ﬁrst-feeding butterﬂyﬁsh larvae can capture 60–80-micron nauplii. They also survive quite well in small rearing systems. In fact, their rearing requirements appear similar to those of Centropyge.

Unfortunately, chaetodontid larvae become more fragile and undergo critical periods of high mortality in the later stages. Heniochus diphreutes, Forcipiger ﬂavissimus, and several Chaetodon spp. were all reared up to 7–8 weeks numerous times, but never beyond. This changed with the 60th tow of the project (and the last tow of 2013), when I ﬁnally collected enough eggs to bring 10 Heniochus larvae through ﬂexion (20–25 dph). Sunny survived the 100-plus-day larval period. As of January 1, 2014, he (actually, she) is a beautiful 125-day juvenile thriving on pellets and newly hatched brine shrimp in my grow-out system.

Like what you read so far?  The full article is available in the March/April 2014 issue of CORAL Magazine

Keep up with the future advances at The Hawaii Larval Fish Project Blog.