The common bristle worms seen in aquaria are fireworms.  Categorized by scientists as worms in the Family Amphinomidae of the Annelid Class Polychaeta, fireworms are easily recognized by their possession of groups of white defensive bristles located on both sides of the body.  These defensive chaetae, which are adapted to easily break off and stick in the mouth of any potential predator, are also the reason that these worms are also found frequently crawling around on the sediment surface, while most polychaetes remain hidden away inside the live rock, or in burrows in the sediments.  One mouthful of painful bristles is a memorable deterrent for most predators.  These chaetae are very effective at deterring predation, and not only in aquaria, their protection extends to nature; fireworms are some of the very few polychaetes seen crawling around on the surface of coral reefs, or any other tropical benthic habitats. 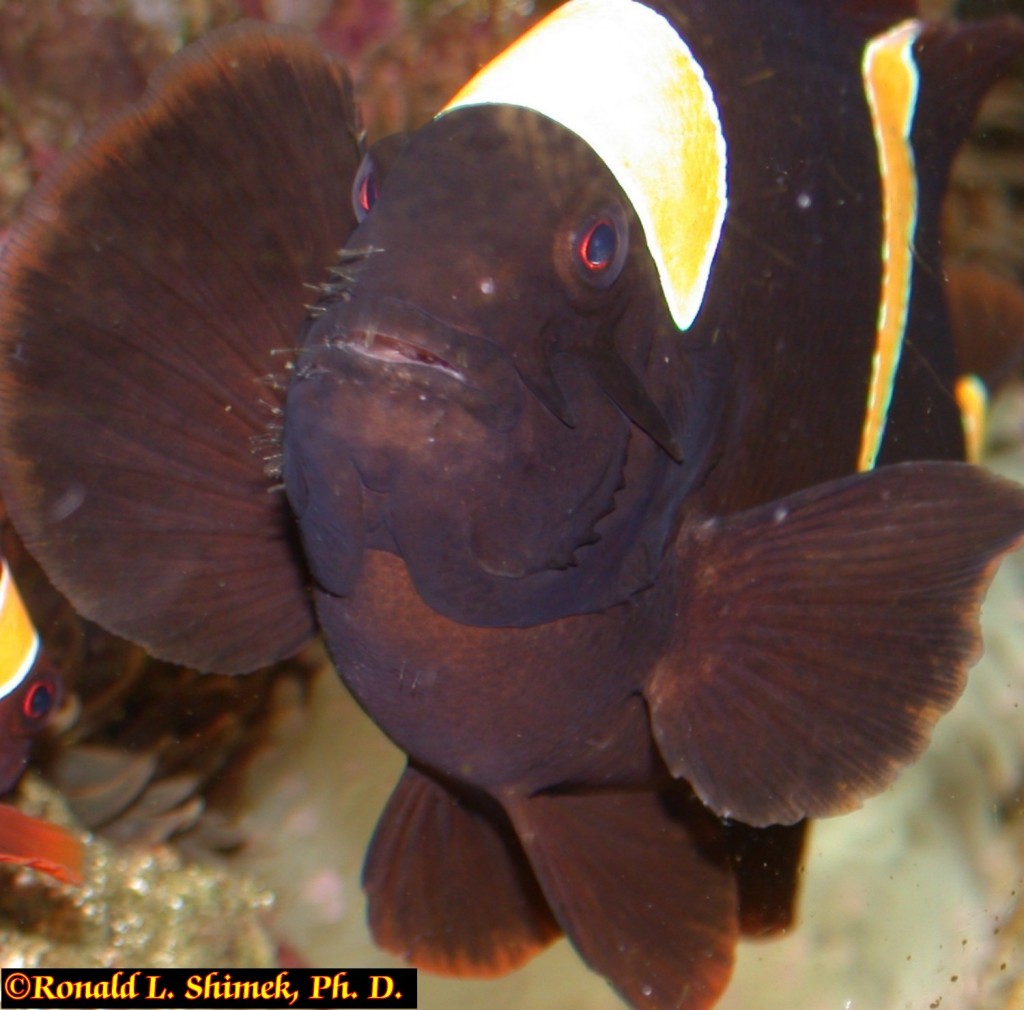 “Big Mama”, A Premnas that graced one of my tanks for several years. She never did learn that biting a fire worm always would lead to a cheek full of spines.

In contrast to their abundance in the tropics, there are no fireworms visible in the habitats in the Pacific Northwest where I did most of my research diving.  As a result, I saw few worms exposed on the sediments in my sandy or muddy study areas. Only in a few somewhat peculiar areas did I see a lot of worms crawling around, and these areas, for reasons I never tried to ascertain, also lacked many animals that would eat the worms.  Additionally, these were areas that were amongst the most unphotogenic – actually downright ugly and visually unpleasant – natural habitats where I had the dubious pleasure of working.  Fortunately, I didn’t have to get out in them very often.

Most of the muddy areas where I worked were not spectacularly beautiful; in fact, it would be a stretch to call them any degree of beautiful, but they did have the advantage of having some relatively interesting animals living in them.  Very few of those interesting animals, however, were bristle worms that crawled on their surface, although some large nemertean or ribbon worms were present (see my earlier blog post detailing the exploits of Prince Marvin).  Rather, if there were interesting worms present, such animals lived within the sediments, most often inside tubes, or galleries of interconnected tubes, the worms constructed in the sediments.  Any research done on them was done following sediment sampling which ultimately destroys all evidence of any behavior but also does separate the dead and preserved worms from the substrate.  Although providing numerical population data, worms collected in this manner definitely lacked aesthetic appeal and their behavior left a lot to be desired.

In a very few areas, however, populations of some relatively uncommon, but quite interesting worm species were revealed to research divers like myself by their odd tubes projecting several centimeters out of the sediments.  Made of sediment particles cemented to some hardened mucus and about 5 or 6 mm (about 1/4th inch) in diameter, the tubes extended some distance vertically above the surface before they bent, in some cases, to end horizontally.  The tube’s opening often faced down-current, and from it, projecting like the spokes of a wheel, were from 6 to 12 thin projections about 2½ cm (1 inch) long. 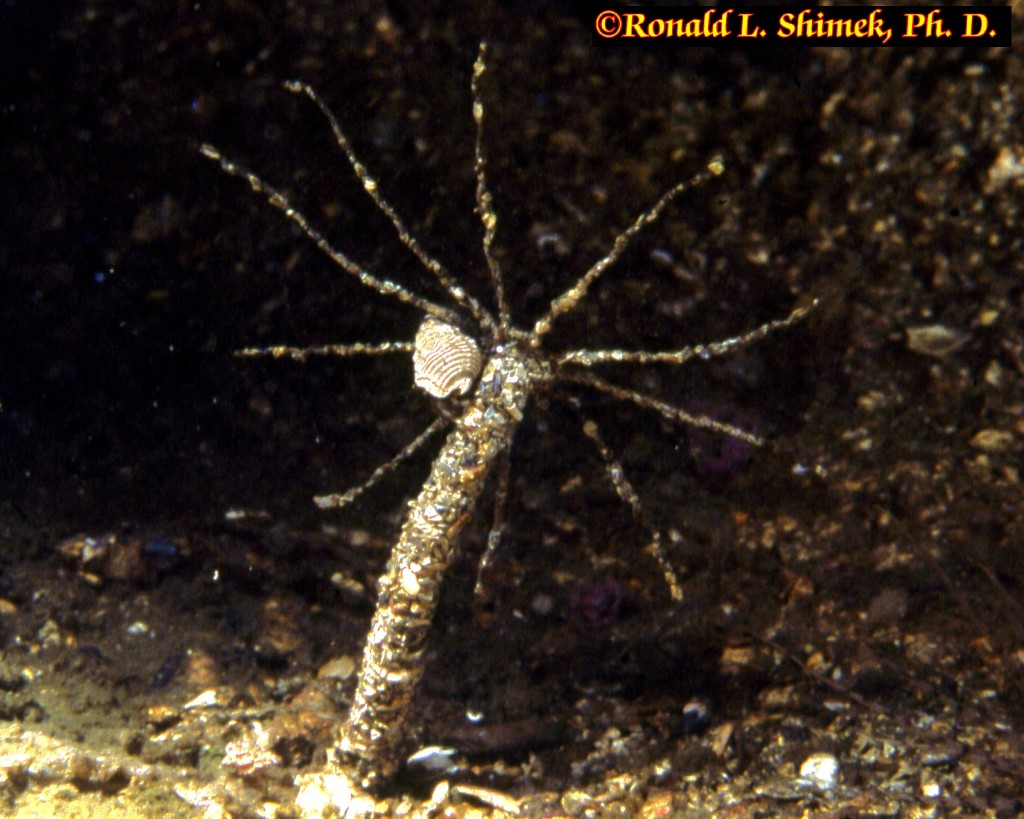 A Praxillura maculata tube from the rear. The worm’s mucus net is up, but has caught relatively few planktonic particles. 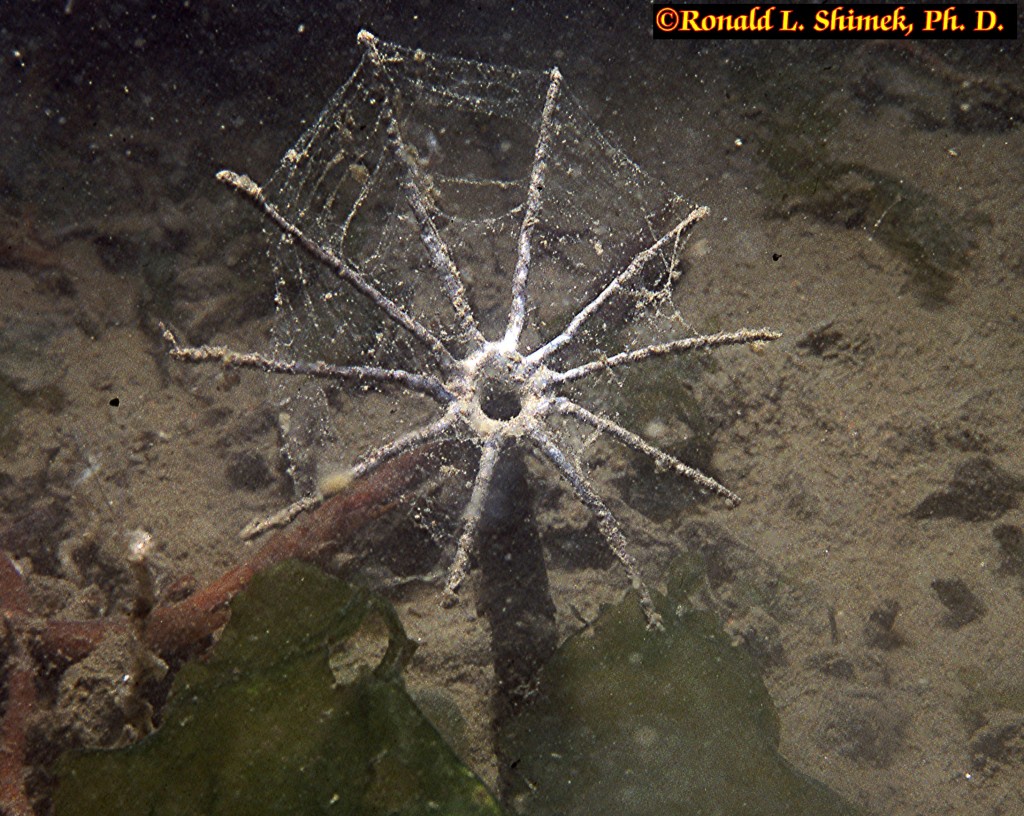 A Praxillura maculata tube showing the mucus between the spokes.  Here the mucus is loaded with particulates for the worm to feed on.

Examining the tubes typically showed mucous strands draped between the spokes.  Collecting the tubes and examining the worms therein, showed them to be Praxillura maculata, a species placed in the Family Maldanidae within the Annelid Class Polychaeta.  Maldanids are often referred to as “bamboo” worms by people working with sediments.  Neither “bamboo worms” nor the term “maldanid” are true vernacular or, common, names as nobody with any sense sees these worms frequently enough to need a “common” name.  Nonetheless, as a descriptive name, “bamboo worms” does the job.  Being constructed of a series of long cylindrical segments does give the worms an appearance of a small piece of miniature bamboo.  The surfaces of the first couple of segments and the last one are often elaborated into grooves, or ridges, but otherwise these species of relatively featureless worms typically lack discriminating characters such as appendages and are, generally, quite difficult to identify, even by a researcher with a lot of experience. 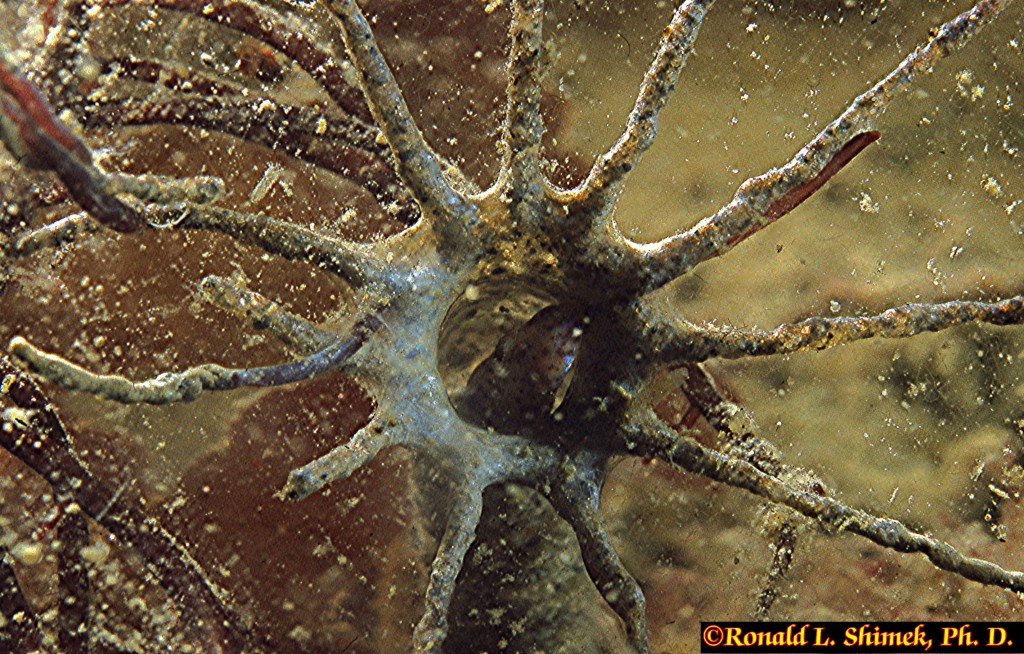 A worm its tube. 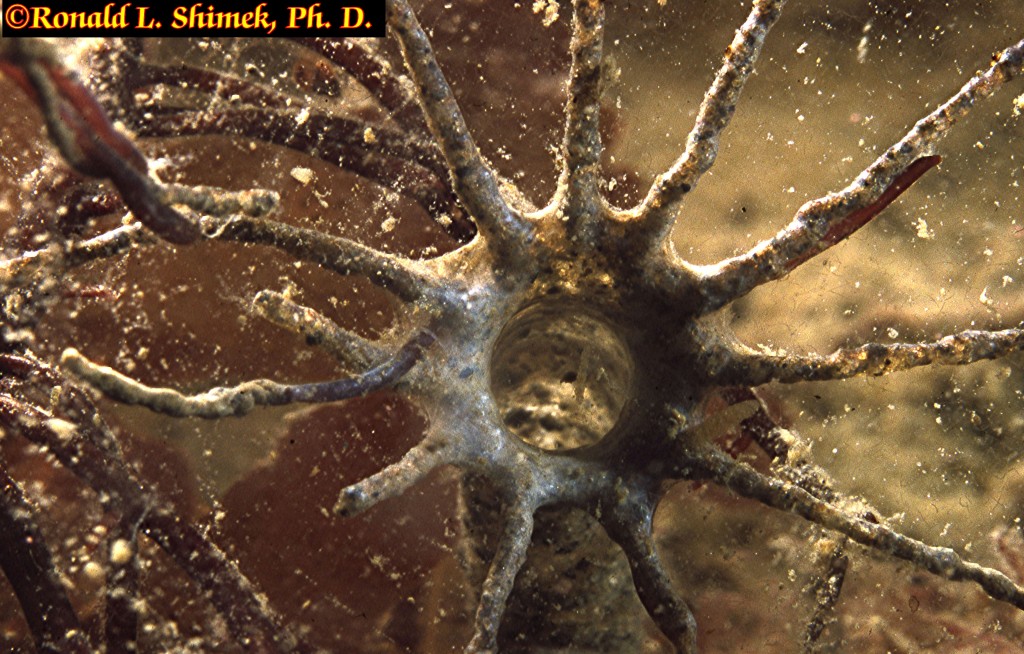 Same tube as the one illustrated above.   The worm retracted back in the tube in response to my strobes.

Early diving observations revealed that P. maculata uses a net it constructs between the spokes of its tube to collect the zooplankton it eats.  It was possible to carefully approach the tubes and get some images of the worms within them actually feeding.   The worm extends from the mouth of its tube and spreads mucus between adjacent spokes.  It continues this process until the mucus net is spread between all the spokes.  Later, it again emerges from the tube and eats the mucus, thus salvaging the glycoproteins in the mucus it secreted earlier as well as any particulate material that has been caught in the net. 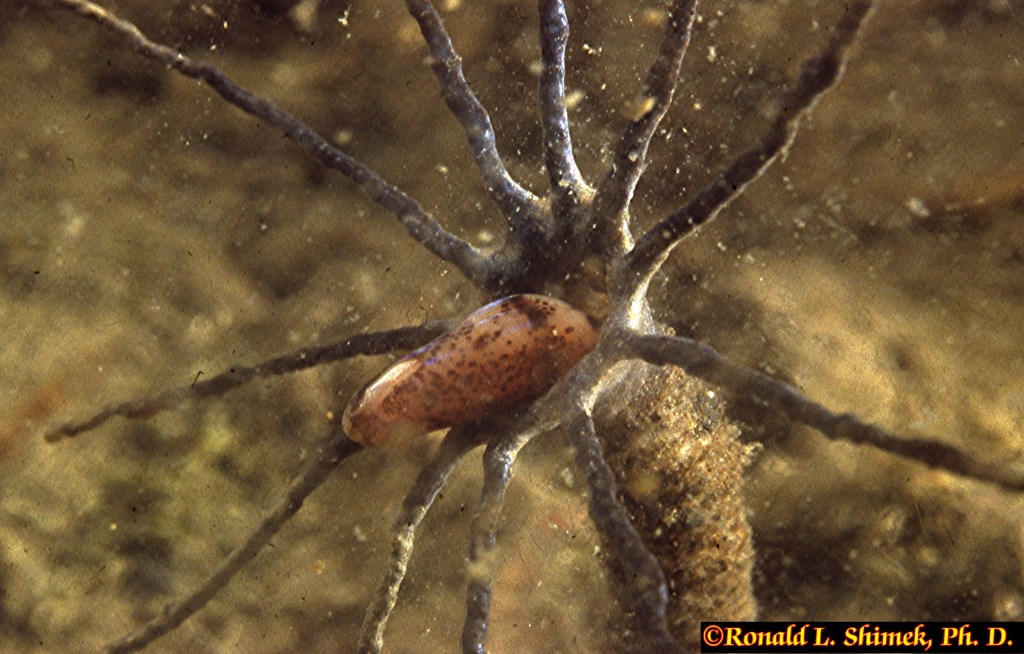 The head of a Praxillura maculata individual extending out along a spoke of it’s tube. Particles are visible in the mucus between spokes. 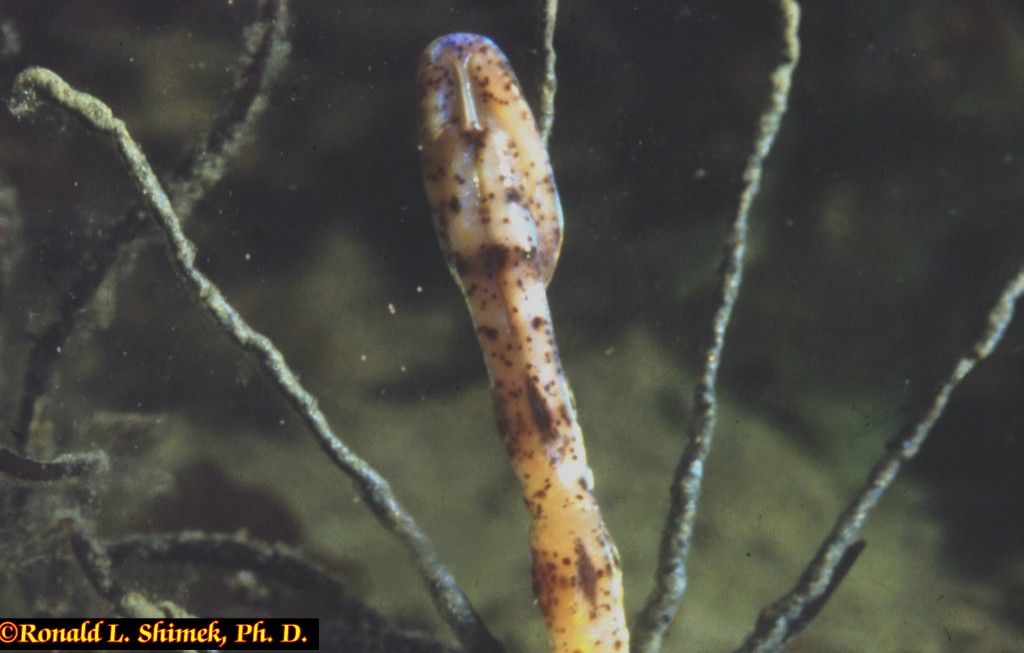 A Praxillura maculata individual extending out along a spoke of it’s tube.  Particles are visible in the mucus between spokes.

I can pretend I used to know a lot about polychaetes from the areas where I did my piddling amount of research, after all, some polychaetes were the prey of the snails I focused my efforts on, and to know a predator, it is absolutely imperative to know as much as possible about its prey.  I did what, at the time, was considered to be a lot of sampling and analysis; the results filled up several boxes of clay tablets and wore out bunches upon bunches of cuneiform reeds.  This all gave me a reasonably good working field knowledge of polychaete biology, at least as it was understood way back then.  Nonetheless, about 40 years has elapsed since those studies, and a lot can happen in that amount of time.  Still, Praxillura maculata appears to be unique; no other polychaete, including no other Praxillura species is recorded to feed in this manner.  Normally, maldanids are considered to be detritus swallowers that live in tubes.  They extend from the tubes to gather for consumption detritus found in their neighborhoods.  That is a feeding mode that is so far from seining or netting, it is hard to conceive of a way that one could get from that to this.  Although some terebellids use a feeding web that is somewhat similar, they don’t use the spoked support for their feeding device. 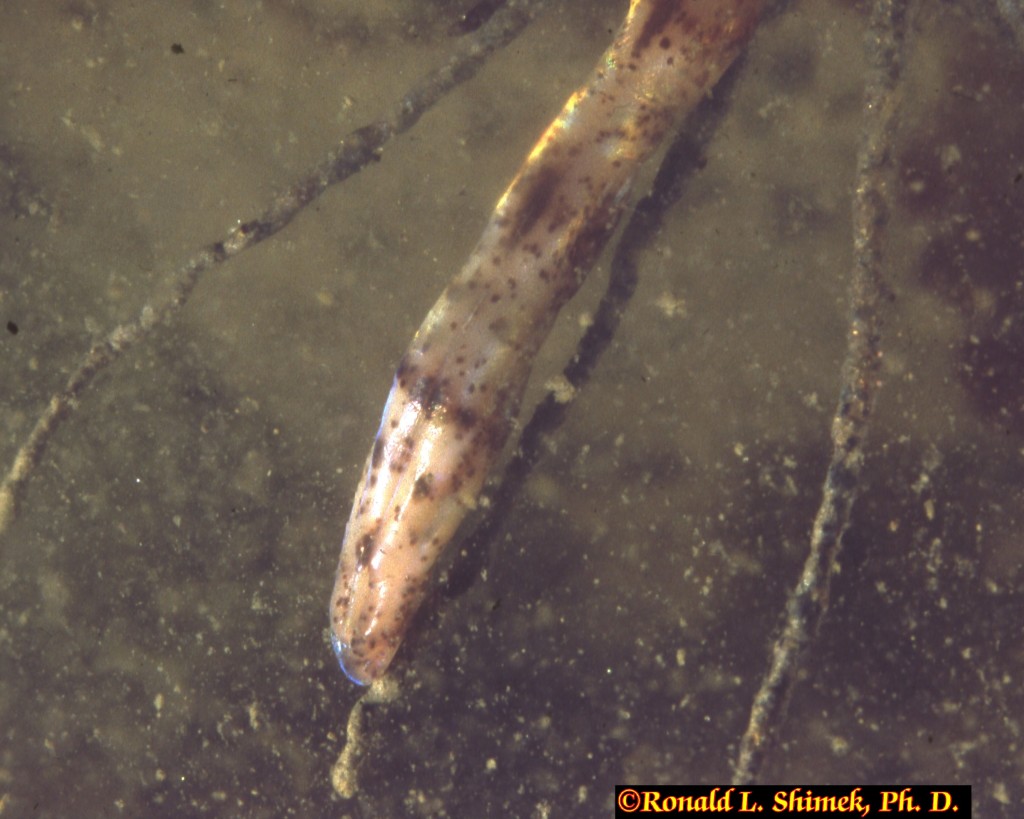 A Praxillura maculata individual extending out along a spoke of it’s tube. Particles are visible in the mucus between spokes. 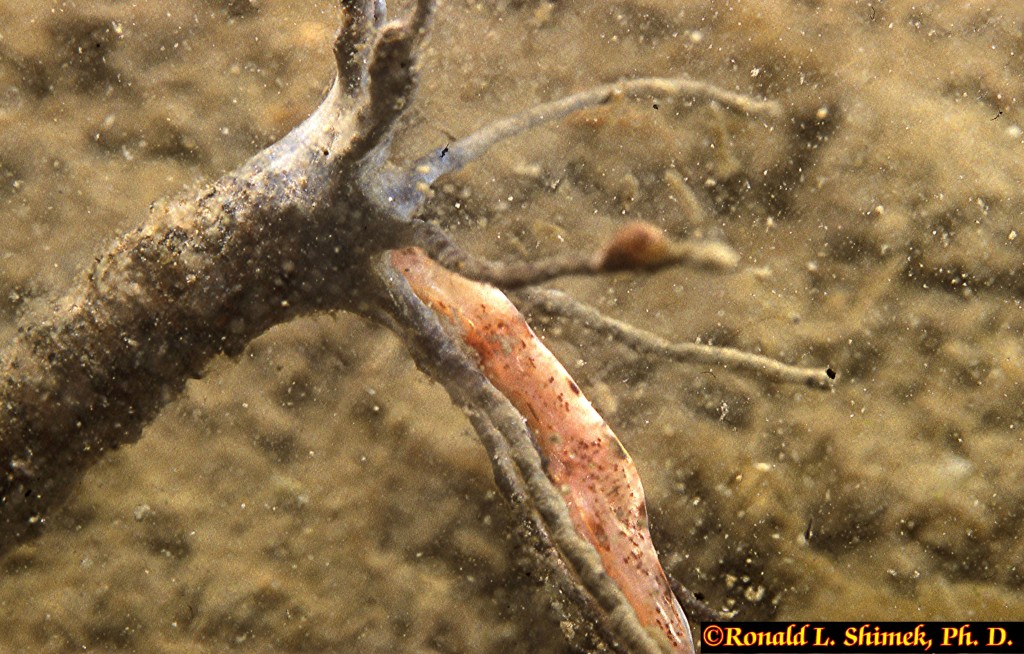 A lateral view of a Praxillura maculata individual extending out along a spoke of it’s tube. Particles are visible in the mucus between spokes.

There are some images taken from the tropics that show something similar, although it differs in specific details, and is unlikely to be the same sort of thing.  The net result is that this really is a unique feeding method.