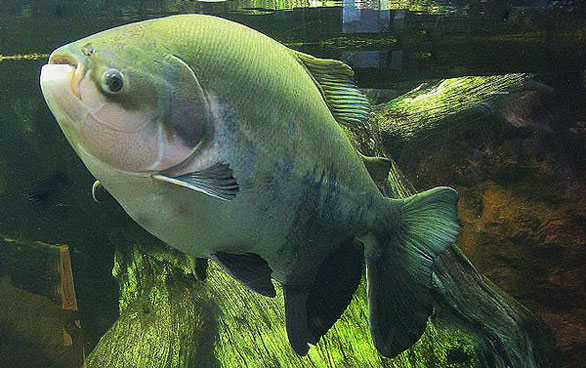 Overview: Pacus are vegetarian cousins of the notorious piranhas, but, despite a superficial resemblance, are generally considered gentle giants and quite harmless. (See Behavior, below.) There are several genera, with Piaractus and Colossoma being the best known. They are gentle, schooling giants—some grow to 40 in (100 cm) long—and are valuable food fishes in their native lands. Think of them as the elephants of the fish world—you would not keep a herd of those in the back yard, and similarly, pacus have no place in the aquarium, although they are available. Public aquariums are already full of unwanted adult pacus.

Behavior & Care: Pacu require a huge tank with powerful filtration to process the vast amounts of waste generated. They have formidable teeth and there are reports of aquarists being bitten while cleaning their aquaria. There are anecdotal reports of pacu artificially introduced into waters in Papua New Guinea attacking humans, specifically targeting the unprotected genitals of men bathing in shallow water. See MAWS: Beware the Fishy Herbivore.

Conservation Status: Pacu are prized for their eating qualities and are considered overfished in many parts of their native range in South America. They are successfully aquacultured to supply food markets and have been introduced in Papua New Guinea, where they are reported to have had a negative impact on native species. They are notorious for outgrowing home aquaria, and feral pacu have been caught in many places after being  released by irresponsible tropical fish hobbyists.