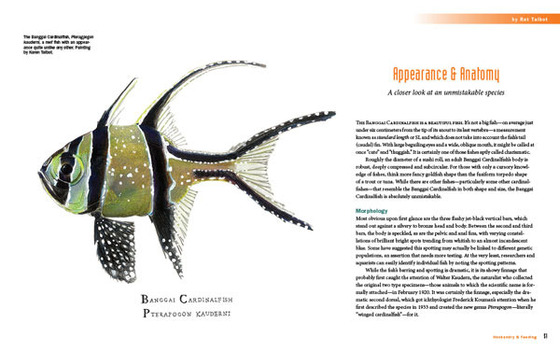 Books will be exclusively distributed by Two Little Fishies, who will have copies on hand for purchase and to present to Banggai Rescue Project Kickstarter Backers who are getting copies as part of the rewards program.

Individual copies may be ordered directly from the publisher.  Click to be notified when books are available to order.

A year ago, I was preparing for a trip to Indonesia to immerse myself in the world of a small reef fish called the Banggai cardinalfish with the intent of contributing to an important book on the species. Editor James Lawrence recently sent me a revised copy of the manuscript (including some absolutely stunning layouts shown here), and it has me thinking back over the past year and the places this project has taken me both physically and intellectually. It also has me thinking about getting the book into your hands!

Taking the Time to Get it Right

While travelling halfway around the world to better understand a fish and its relationship to its environment and the fishers who interact with it is something to which I am not unaccustomed in my line of work, there was (and remains) something different—something very special—about the Banngai cardinalfish project. For one, it has been a much larger project than any of us anticipated, and the challenges along the way have been significant.

From lengthy delays in getting the science done right to dealing with our own losses of broodstock secondary to the very virus about which we were writing, everything seemed to take twice as long as expected. Having said that, what we have learned has reinforced the importance of embarking on the Project in the first place. We have made the internal decision to take the time to do it right, and while we know the delay is frustrating, we think the final product (which is now over 300 pages–about 35% more than projected!) will more than justify our decision.

As you know, we had originally planned on having the book signed, sealed and delivered last September, a timeline that, with hindsight, seems absurd. Speaking for myself, I thought I had a pretty good handle on the species and the fishery. After all, I have been covering it since 2008. I knew I needed to get up to speed on the virus impacting the species and the current fisheries data, and I knew I’d need to dig a little deeper into the species-specific physiology (with the help of my scientific illustrator wife and her microscope, of course), but that wouldn’t take that long, would it?

It did…and it has…and it continues to. Take a lot of time, that is.

A Deep Sense of Responsibility to the Reader

When I work on any project, be it a blog entry, a feature magazine article or a book, I feel a deep sense of responsibility to give the reader as full a picture as possible, not because I want to tell the reader what to think, but rather because I want the reader to have enough information on board to engage intelligently in the dialog. To me, promoting discussion on topics I think are important is my number one job as a writer. 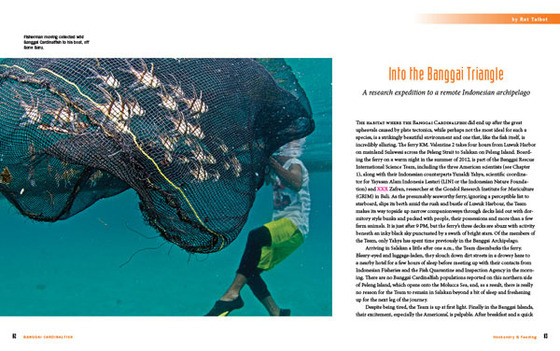 When it comes to the Banggai project, we have found a space full of controversy and politics, conflicting information and strong emotions. Capturing the many facets of this story, while also trying to work with divergent groups and navigate a geopolitical minefield inhabited by NGOs, international fisheries managers and a marine ornamental trade dealing with a host of its own controversial issues (many of which are both directly and indirectly tied to the Banggai cardinalfish) has been one of the most complex assignments I have undertaken. Collaborating with international partners has proved logistically challenging but essential. Dealing with a story that keeps evolving (I just got a call last week that could have major implications on several key aspects of the book), can be exasperating. Following each twist and turn has meant travelling thousands of miles, reading countless pages, taking multiple notebooks full of notes, and shooting more images than I care to edit. In all this, I want you, the reader, to know you have been on my shoulder.

Whether you are an aquarist, a diver, a biologist, a fisheries manager, an aquaculturist, or any number of other epitaphs of potential readers of this book, I have tried to keep you in mind—and my responsibility to you—throughout the process. All of us who have worked on the Project have gone way beyond the work for which we knew we would be compensated, because the work has become a passion—because we care so much about the role this book can play in promoting critical conversations.

Attempting to package all of this into a book that will encourage intelligent and essential dialog about the species and its future has been an extremely difficult and yet an infinitely rewarding experience. As I work my way through the draft manuscript James sent me, I am growing increasingly excited to get this book—and more importantly—this information out into the world. As I look at the layouts the team at Reef to Rainforest in Vermont has put together, I become more and more enthused about what we have accomplished and how that will soon be handed over to you so you can take the next step.

So what does this all look like in pragmatic terms? It means we are woefully behind our original timeline, but it also means we are rapidly closing in on a publication date of a book about which we are very proud. As we have asked already, we continue to request that you indulge us. Those of you who subscribe to CORAL and AMAZONAS know the very high quality of production for which Reef to Rainforest is known, and producing a book of equal quality and beauty takes time, but we think it’s worth it. 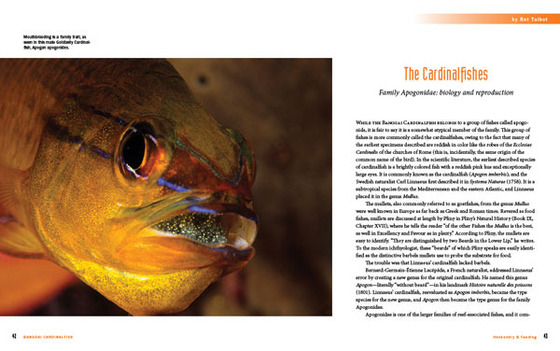 As much of the work has now shifted to production and moving quickly toward presses running, Karen and I here in Maine are freed up to get the next set of rewards into the mail. Most of you should either have some of your rewards already in hand or have a tracking number that was emailed to you. For the higher-level donors, we need to hold off just a little bit longer (sorry!), as some of you are receiving original artwork that is also appearing in the book. We decided to send everyone who made any contribution to the project, a notecard set, including three notecards featuring a scientific illustration by Karen and three notecards featuring a photograph by me. Those will be coming via USPS in the next two weeks, so be on the lookout.

If you have any questions about any of these rewards (or anything else), please feel free to email me directly at Ret@RetTalbot.com. While we are eager to get these tokens of appreciation of your support into your hands, we want you to know we are also keeping our eyes on the prize and getting the best possible book published as soon as we are able.