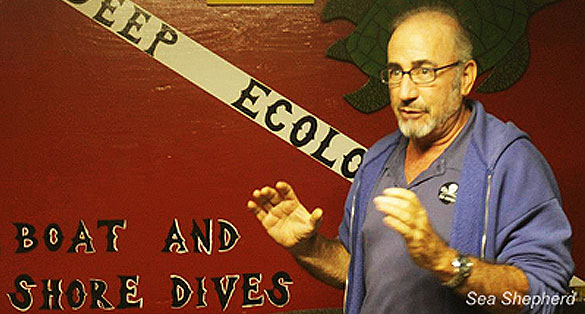 Today the Sea Shepherd Conservation Society launched Operation Reef Defense, a campaign spearheaded by Sea Shepherd Vice-President Robert Wintner to shut down marine aquarium fisheries. In the Jan/Feb 2011 issue of Coral Magazine, I wrote an article called “Postcards from Hawaii” in which I looked at the past, present and future of Hawaii’s marine aquarium fisheries. In researching the article, I sat down with a lot of people, including Wintner. The Sea Shepherd website had recently published his essay entitled “The Dark Hobby; Can We Stop the Devastating Impact of Home Aquaria on Reefs Worldwide?” on its website, and this single action, especially given the popularity of Sea Shepherd’s “Whale Wars” television series with aquarists, made Wintner a household name with many on the mainland. I wrote:

When the anti-whaling Sea Shepherd Society published his essay…it was greeted with perfunctory expletives by many in the Hawaiian Islands familiar with his crusade. More than a few concerned aquarists, on the other hand, wanted to know if Wintner’s claim that the aquarium trade aggressively and irresponsibly overharvests fish in Hawaii was factual. More than one asked questions in this vein: “If the trade isn’t sustainable in Hawaii, how can it be sustainable in developing island nations where oversight and regulation is not what it is in the U.S.?”

My interview with Wintner was enlightening. Through it, I came to realize that, when pushed, Wintner was not really interested in looking at the data and discussing the sustainability of the marine aquarium fishery in Hawaii because, quite simply, he refuses to view it as a fishery. Here’s the way I summed up my exchange with Wintner in the article in Coral:

Wintner and I sat down at a Starbucks on the Dairy Road not far from the airport to discuss the trade. Wintner begins by telling me his own story; this campaign against the aquarium trade is, after all, deeply personal for him. Wintner’s argument is primarily rooted in his own experience diving the reefs of Maui. He tells me there was once “an abundance of fish” in Hawaii. Now the “aquarium hunters” have diminished that abundance. “Aquarium hunters have oppressed Hawaii’s reefs for years,” he says. “With no limit on catch or number of catchers.” If it doesn’t stop, Wintner contends, there will be no fish left. “Ninety-eight percent of Hawaii’s reefs can be emptied of every fish by the aquarium trade, and it’s legal.”

I proffer that this is an exaggeration not based in fact. For example, 35% of the reefs on the Big Island of Hawaii, which is where the aquarium trade is concentrated, are completely off-limits to livestock collectors. I suggest that this is hyperbole in the service of his ends, but Wintner remains firm. “They can do whatever they want,” he says.

What about the permitting and reporting system? I ask. “Anyone with Internet access and 50 bucks can get a permit…and there are huge discrepancies between reported catch and actual catch,” Wintner counters. “The Division of Aquatic Resources [DAR] has admitted that the report of catch of 1 to 2 million fish per year is off by a factor of two to five times.” DAR’s published numbers do not bear any resemblance to those Wintner attributes to them.

But still, I continue, the fishery is managed by the state to be sustainable, right?

“A state agency manages the trade as a ‘fishery,’ and [the Department of Land and Natural Resources (DLNR)] calls the aquarium trade ‘sustainable,’” Wintner admits, “but it’s really nothing more than disposable wildlife pet trafficking for the money. By sustainable the DLNR means taking all but a few brood fish so the species won’t collapse.”

I have reams of data from marine scientists in my notebook on the table between us that clearly refute Wintner’s claims. While there are myriad ways to interpret the data, there is no scenario in which any one species has been overfished to the point where only a few brood fish remain. Based on my reading of the data, and the interviews I have already conducted, I suspect that the fishery needs to be better managed if it is to continue to be both robust and sustainable, but what I’m really interested in knowing is whether or not Wintner thinks the fishery itself is unsustainable at present.

“We don’t use the ‘f word,” he says, referring to fishing. “This isn’t fishing. Fishing is about sustenance. This is wildlife trafficking for the pet trade, and people shouldn’t keep wild animals. This is a crime against nature being committed in Hawaii,” he says. “I am here because I have a relationship with fish…It’s a moral issue.”

As I drive the road to Hana later that day to meet with a cultural practitioner, I think back over my conversation with Wintner. His arguments are about ethics and morality. They are about his own individual relationships with fishes, not unlike the relationship between the girl and the Crosshatch Triggerfish I observed at the Waikiki Aquarium. I can respect that, even if I don’t agree with his position. That said, it is important to understand that Wintner is not making an argument against the so-called “trop” or AQ fishery, for, by his own admission, he does not acknowledge the existence of a marine aquarium fishery. While he sometimes uses data—hard numbers—to support his position, when pushed he always comes back to his central premise: the marine aquarium trade is immoral.

I share this blast from the past with you today because I think my findings in 2010 regarding Wintner and his motivations and strategy hold true today, and it makes me very suspect of Operation Reef Defense. I have spent a lot of time in Hawaii since that article was published. I have spent countless hours with fisheries biologists and fishers, environmentalists and politicians. In short, I have immersed myself in researching the aquarium fishery in Hawaii and its continued path to becoming more transparent, better regulated and, ultimately, sustainable. Without getting into the specifics here, I can say with great confidence that the best available science does not support Wintner’s claims about the State’s aquarium fishery. Further, if the claims being made about the aquarium fishery were true, we should be very worried about other far larger fisheries in Hawaii that lack the data to demonstrate sustainability and the regulation to insure it.

As I said back in 2011, and I’ll say again now, if Wintner believes keeping an animal in an aquarium is immoral, I can respect that. If he wants to make an argument that the aquarium trade should be banned because the act of collecting an animal and putting it in an aquarium is immoral, I can respect that. What I can’t respect is ignoring the best available science. What I can’t respect is attempting to railroad a constructive multi-stakeholder process and a larger dialog about sustainability within aquarium fisheries worldwide in order to further one’s own ethical agenda. Like many of the fisheries about which I write, aquarium fisheries are far from perfect, but they are also not the monster Wintner makes them out to be. I have seen first hand, for example, how sustainable aquarium fisheries around the world can play a critical role in conserving reef ecosystems, supporting coastal villages and maintaining cultural identities and connectedness to critical resources.

There are those who will say that I’m off on a tangent here. They will say that Operation Reef Defense is not about simply attacking the aquarium trade. After all, the press release issued today announcing Operation Reef Defense states the campaign is “a global campaign to end the destruction of coral reefs and the many threats they face worldwide,” right? Wrong. Look at the images on the website (see screenshot pictured here), and consider the emphasis on aquarium fisheries versus other anthropogenic stressors to coral reefs. If this campaign was really about defending reefs against the most significant impacts, wouldn’t we see pictures of terrestrial runoff, coastal development, carbon producing machines, and, yes, even mask and snorkel-wielding tourists trampling Hawaii’s reefs? Instead we only see images related to aquarium fishing. Isn’t it clear what’s going on here?

My hope would be that the Sea Shepherd Conservation Society might take another look at Operation Reef Defense. I think we all know coral reefs worldwide do need defending, and I would invite Sea Shepherd to make this campaign about taking actions that will address the root issues, not further the agenda of an individual. If that were the case, I suspect more than one aquarist would become an ally in helping Sea Shepherd defend the world’s reefs, while at the same time insuring the marine aquarium fisheries on which their hobby depends continue to become truly sustainable fisheries that create real economic incentive to conserve and continue to inspire millions to care about that which lies just beneath the surface.