Back from the Dead: Remote Reef Recovers 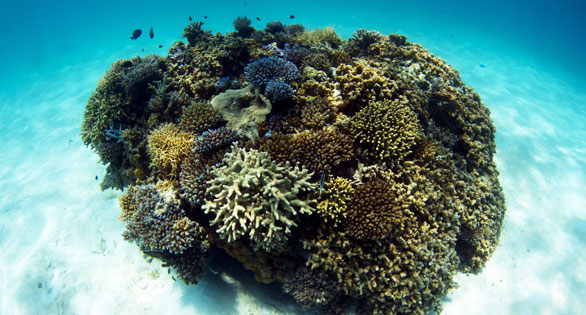 Contrary to popular wisdom, coral reefs in remote areas have the potential to rebound from bleaching events and in time frames that marine biologists find astonishing.

Isolated coral reefs can recover from catastrophic damage as effectively as those with nearby undisturbed neighbours, a long-term study by marine biologists from the Australian Institute of Marine Science (AIMS) and the ARC Centre of Excellence for Coral Reef Studies (CoECRS) has shown.

Scott Reef, a remote coral system in the Indian Ocean, has largely recovered from a catastrophic mass bleaching event in 1998, according to the study published in the journal Science. 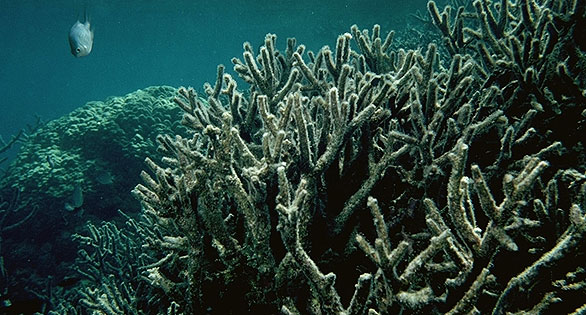 Following the bleaching event in 1998, 70-90% of stony corals were killed in the Scott Reef area 300 km off northwest Australia. Credit: L. Smith.

The study challenges widely accepted theory that suggested isolated reefs were more vulnerable to disturbance, because they were thought to depend on recolonisation from other reefs. Instead, the scientists found that the isolation of reefs allowed surviving corals to rapidly grow and propagate in the absence of human interference.

Australia’s largest oceanic reef system, Scott Reef, is relatively isolated, sitting out in the Indian Ocean some 250 km from the remote coastline of north Western Australia (WA). Prospects for the reef looked gloomy when in 1998 it suffered catastrophic mass bleaching, losing around 80% of its coral cover. The study shows that it took just 12 years to recover. 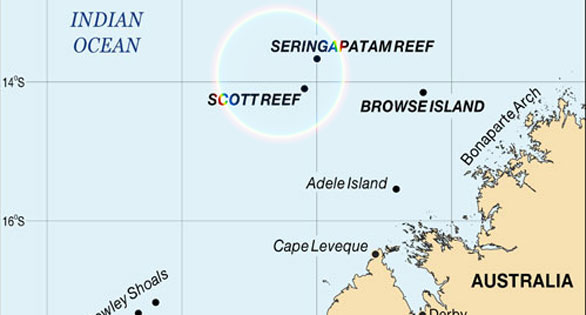 Scott Reef lies 300 km off northwestern Australia and is a group of atolls in the Timor Sea. Credit: Carto ANU

Spanning 15 years, data collected and analysed by the researchers shows how after the 1998 mass bleaching the few remaining corals provided low numbers of recruits (new corals) for Scott Reef. On that basis recovery was projected to take decades, yet within 12 years the cover and diversity of corals had recovered to levels similar to those seen pre-bleaching.

“The initial projections for Scott Reef were not optimistic,” says Dr James Gilmour from AIMS, the lead author on the publication, “because, unlike reefs on the Great Barrier Reef, there were few if any reefs nearby capable of supplying new recruits to replenish the lost corals at Scott Reef.

“However, the few small corals that did settle at Scott Reef had excellent rates of survival and growth, whereas on many nearshore reefs high levels of algae and sediment, and poor water quality will often suppress this recovery.

“We know from other studies that the resilience of reefs can be improved by addressing human pressures such as water quality and overfishing,” says Dr Gilmour. “So it is likely that a key factor in the rapid recovery at Scott Reef was the high water clarity and quality in this remote and offshore location.”

“Previously we’ve tended to factor proximity to other reefs as a key attribute when estimating the resilience of a reef following a major disturbance, but our data suggests that given the right conditions, reefs might do much of the recovery by themselves.” This finding could have implications for the management of marine protected areas.

In their publication the team also draws attention to the important role played by climate change in the longer-term prospects for coral reefs, as Prof Morgan Pratchett of CoECRS explains. 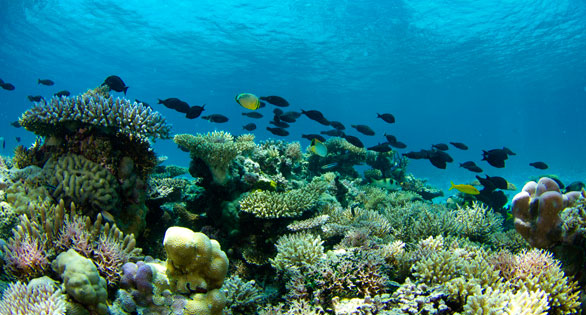 Scott Reef had largely recovered from a catastrophic mass bleaching of corals within twelve years of the disturbance, despite the lack of connectivity to other reefs in the region. The rate of recovery was attributed to the lack of many local anthropogenic pressures affecting reefs around the world, such as degraded water quality and overfishing of herbivores (credit: N Thake).

“While it is encouraging to see such clear recovery, we need to be mindful of the fact that the coral recovery at Scott Reef still took over a decade. If, as the climate change trend suggests, we start to see coral bleaching and other related disturbances occurring more frequently, then reefs may experience a ratcheting down effect, never fully recovering before they suffer another major disturbance.

“By preventing illegal fishing and enhancing water quality on coral reefs in all regions we will give these reefs a greater capacity to recover from major disturbances.”

The highly detailed, long-term data set makes Scott Reef the best studied reef in Australia’s Indian Ocean territory. The study provides valuable new perspectives on ecosystem function and resilience of coral reefs situated in the northwest Australia, and in other contexts such as the Great Barrier Reef, and illustrates the importance of AIMS’ research collaborations with its industry partners.

CREDIT: From materials released by the Australian Institute of Marine Science, Townsville, Queensland. Images provided by Science in Public.

Coral reef recovery from major disturbance is hypothesized to depend on the arrival of propagules from nearby undisturbed reefs. Therefore, reefs isolated by distance or current patterns are thought to be highly vulnerable to catastrophic disturbance. We found that on an isolated reef system in north Western Australia, coral cover increased from 9% to 44% within 12 years of a coral bleaching event, despite a 94% reduction in larval supply for 6 years after the bleaching. The initial increase in coral cover was the result of high rates of growth and survival of remnant colonies, followed by a rapid increase in juvenile recruitment as colonies matured. We show that isolated reefs can recover from major disturbance, and that the benefits of their isolation from chronic anthropogenic pressures can outweigh the costs of limited connectivity.

Coral reefs suffer mass mortality because of coral bleaching, disease, and tropical storms, but we know much more about when, where, and how rapidly these ecosystems have collapsed than we do about their recovery. Gilmour et al. (p. 69; see the Perspective by Polidoro and Carpenter) studied a highly isolated coral reef before and after a climate-induced mass mortality event that killed 70 to 90% of the reef corals. The initial recovery of coral cover involved growth and survival of remnant colonies, which was followed by increases in larval recruitment. Thus, in the absence of chronic disturbance, even isolated reefs can recover from catastrophic disturbance.