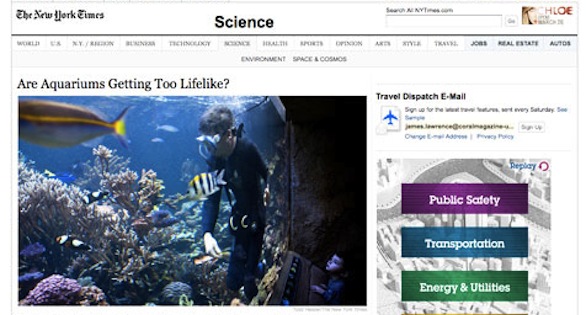 A screenshot of the New York Times article.

The headline Are Aquariums Getting Too Lifelike? is splashed across the top of the front page of today’s Science Times section of The New York Times, with a jumbo image of Joe Yaiullo doing maintenance in the 20,000-gallon reef at Atlantis Marine World.

The article, by Henry Fountain, provides a balance of viewpoints, but it has Florida marinelife collectors, and state wildlife regulators, lining up to defend themselves.

In the article, Andrew Rhyne, Ph.D. suggests that certain invertebrates, such as blue-legged hermit crabs, peppermint shrimp, Astrea grazing snails, and others are being overcollected to be used as aquarium maintenance animals, as demonstrated by reported increases in the numbers collected over the past decades. Rhyne is the lead author of a recent paper entitled, Crawling to Collapse: Ecologically Unsound Ornamental Invertebrate Fisheries, in the online journal, Plos ONE. (See below.)

From the Times Article:

“‘We may be increasing the catch up to a point where you push something over the edge,’ said Andrew Rhyne, a marine biologist with Roger Williams University and the New England Aquarium who has studied the Florida invertebrate fishery. ‘The question is, where is that edge?’

‘If a species is overharvested to the point where its numbers decline dramatically, Dr. Rhyne and others say, there can be a cascading effect in the ecosystem. Without invertebrate grazers and herbivores, for example, a reef may be overrun with algae.'”

Florida marinelife collectors are calling Rhyne’s conclusions “reckless” and “selective science,” and the Times article produced some support for them from state biologists:

“Jessica McCawley, a biologist with the Florida Fish and Wildlife Conservation Commission, disagrees that the fishery is threatened. She helped update the regulations last year, and said: “These collectors are a special type of fisherman. They’re very concerned about the environment and the sustainability of the fishery. And they came to us and said, ‘Can you put some regulations on us?’ ”

One of the most prominent marinelife collectors, Ken Nedimyer of Key Largo and currently involved in a major reef restoration project funded by NOAA and the Nature Conservancy, told CORAL that allegations of unsustainability are extremely unsettling to the many ethical, conservation-minded collectors in Florida.

“Andrew Rhyne’s recent paper has raised a lot of concerns about the management of the Florida Marine Life fishery and the sustainability of the resource that supports the fishery,” says Nedimyer. ” The marine life fishermen and the state of Florida recently concluded almost 5 years evaluating the available landing data, the emerging trends in the fishery, and the health of the resource, and as a result of that evaluation, made several significant adjustments to the fishery management to address emerging trends and concerns.

“The management plan is a dynamic work in progress that is reviewed on a regular basis by the fishermen,the scientific community, and the regulators at both the state and federal levels. In the absence of life history data for most of the species harvested by the marine life fishermen, the state of Florida has relied heavily on input from the people who have the most knowledge about the species,
the fishermen themselves, and tried to develop a conservative management plan for the fishery.

“Many of the fishermen are now working with scientists to try to help find out more about the various species harvested by the fishermen, and as that information is made available, further adjustments to the management plan can be made if needed.

“We don’t believe that Dr. Rhyne’s conclusions are an accurate representation of where the fishery is headed and do not take into account the vested interest the fishermen have in maintaining a healthy, sustainable fishery. We believe his published paper does more harm than good and seriously undermines the hard work that hundreds of people have put into developing and revising this management plan over the past 21 years.”

In support of this, Florida officials said that the invertebrate harvest is being adequately monitored. Again quoting Ms. McCawley, the Fish and Wildlife Conservation Commission biologist: “If we see an explosion in a particular species, then we can come back and revisit this at any time,” she said. “We feel
these things are pretty well protected.”

Also from the Times: “Jeff Turner, owner of Reef Aquaria Design of Coconut Creek, Florida, which builds and maintains large reef aquariums in homes, offices, hospitals and other institutions, says these are not mere decorations, but ‘an educational window into the sea.’ The hobbyists and professional aquarists who undertake these projects, he said, ‘are concerned about the marine environment.'”

Are Aquariums Getting Too Lifelike? by Henry Fountain, The New York Times, March 23, 2010, Science Times, page 1.

Fishery management has historically been an inexact and reactionary discipline, often taking action only after a critical stock suffers overfishing or collapse. The invertebrate ornamental fishery in the State of Florida, with increasing catches over a more diverse array of species, is poised for collapse. Current management is static and the lack of an adaptive strategy will not allow for adequate responses associated with managing this multi-species fishery. The last decade has seen aquarium hobbyists shift their display preference from fish-only tanks to miniature reef ecosystems that include many invertebrate species, creating increased demand without proper oversight. The once small ornamental fishery has become an invertebrate-dominated major industry supplying five continents.

I’m afraid that the Rhyne, Rotjan, Bruckner, Tlusty paper, “Crawling to Collapse: Ecologically Unsound Ornamental Invertebrate Fisheries” is in the “not so good” category.

In this day of great environmental awareness, predicated on great environmental decline, this can be extremely problematical, especially when the media look for the most sensational angle that they can portray to draw in readers and instill a sense of outrage often based on the worst implications reported in “not so good” science. The Rhyne paper, upon which the NY times article is based, is good in the analysis of the catch data, but no so good in the analysis of the implications of the data.

Below is a reply I wrote to Forrest Young when he requested my opinion last December. This is still my opinion.

“On the paper by Andy, et. al. … It’s an interesting analysis of the catch data, certainly enough to raise a few red flags, at least give some definition to red flags that have been evident for some time now.

But in my opinion, the data does not support their conclusions, in particular the alarmist title. “Crawling to Collapse: Ecologically Unsound Ornamental Invertebrate Fisheries” Florida has a great coastline and there is no information on the distribution of effort along the coast and no indication of effort in specific areas.

Also no comparison of what effect collection has had on populations where fishing effort is expended and where it has not, and very importantly, even though the numbers are high compared to past years, there is no discussion on what may be sustainable and what might not be sustainable.

Also the aquarium market is fickle, it changes with fads and changes in aquarium management so it really is not not accurate to say, “Thus any reductions in landings may signal larger problems in the invertebrate fishery as the decrease is likely a result of lower abundance rather than a lessening in demand.'”

And to implicate ornamental invertebrate fisheries in the phase shift on the reefs from coral to algae cover is disingenuous at best. Usually charges of overfishing and eminent population collapse are based on biological analysis of the animals taken by the fishery and/or ecological analysis of the environment. What they are saying Is, again in my opinion, “Hey, the fishery for ornamental invertebrates has recently greatly expanded in Florida, therefore these populations must be ready to collapse.”

What they should have said is “Hey, the fishery for ornamental invertebrates has recently greatly expanded in Florida, we (fishery managers) should take a good look at what’s happening and where it’s happening.”

Andrew Rhyne’s recent paper is certainly making headlines; unfortunately pushing attention in the wrong direction. I believe the aquarium industry sits in a very fragile position teetering between ‘raiders of the reef’ and ‘powerful educational tools’, which too often in the media leans only one way. This paper falls on the heels of wide spread media attention of global climate change, phase shifts, ocean acidification and world-wide coral and habitat loss.The media is searching for doom and gloom and when a paper suggests a fishery collapse it is hard to ignore.

The reality of the paper though is that it offers little more than speculation and a suggestion to be cautious. The introduction to the paper is fantastic and offers a great historical perspective of the trade, but is used to motivate the reader towards a negative perspective. The ‘hardcore’ data used in this paper comes from catch data. Historically, the same trend is present in virtually all fisheries examples; catch goes up over time – no surprise there. This is the only conclusion that can be drawn from the data.

Organisms are pooled in the analysis by their ‘ecological role’ with no acknowledgment of life-history variation. This is perhaps the most important aspect of this fishery. In general, these small hermits, Mithrax crabs, and snails are short lived organisms experiencing fast maturation, quick regeneration time, and stochastic population booms. Short lived organisms are highly influenced by environmental conditions; populations wane and boom in response to stochastic events such as hurricanes, heavy rainfall, etc. and can rebound quite quickly under favorable conditions.

The ‘rogue wave theory’ suggests that when all environmental factors align (heavy plankton productivity, calm seas, etc.) a single recruiting cohort can make up for many failed years (when environmental conditions for larval development and settlment are not ideal). Ken and Pete Kehoe paint this picture beautifully! Pete has a wealth of imagery, both past and present, that suggest no harm or threat to the fishery. These are trends that will not appear in the analysis.

This should be the take home message of the paper: that the collection of such organisms should be cautioned in the absence of such data. However, the reality or more the fear is that papers such as this will be used to stack the odds against the marine ornamental trade and close the fishery. Can you think of a single marine ornamental fish or invert where natural biomass data exists? The answer is no in most cases, so the snails and crabs of the Caribbean are not much different than any other ornamental fishery and should you compare the catch data of firefish and royal grammas in a similar fashion you would likely see a similar trend. So how can you say harvest rates are too high? You can’t: you can only suggest that harvest rates are increasing and in the absence of good data we should keep an eye on it.

It is troubling to hear that this paper is working against so many years of hard work, but I believe Andrew Rhyne had the best interests for the fishery and the aquarium trade in mind.